A lot of people are still feeling very bruised by last Friday’s market actions (Felix Salmon went as far as ordering all retail investors to get out of the pool). A message from a reader with ample trading desk experience:

BTW, hope you didn’t have any sell-stops yesterday, WTF was that?!?!? I covered my SPY short with a market buy order on the bounce (HAD to be .gov buying S&P 500 futures, some serious ammo bid the mkt very hard) and my shares were bought in 2 blocks, a freaking NICKEL apart?!?!? Normally SPY moves in nano-penny increments, one of the most liquid things on the planet. Def smells extremely fishy, somebody made a killing running the stops then pulling liquidity away from the system at the same moment. Somebody STOLE a bunch of AAPL from folks, among many other things. You’ve got to imagine every hedgie on the planet (that didn’t get blown up yesterday) is thinking about how to engineer and profit from a similar event down the road. I am flat as a board right now, this mkt scares the hell out of me on both the long and short side.

Yves here. Even if the his widely shared suspicion, that the air pocket in the market was orchestrated, proves to be incorrect, the second part of his comment is almost certainly true, that hedge funds are studying whether they can engineer a little P&L flattering volatility of their own.

But the investigations seem to be characterizing the problem in a way that is not helpful for the laity or policy makers, at least if the New York Times is reporting accurately:

It was an unintended consequence of a system built to place a circuit breaker on stocks in sharp decline. In theory, trades slow down so that sellers can find buyers the old-fashioned way, by hand, one by one. The electronic exchanges did not slow down in tandem, causing problems, according to two officials familiar with the investigation.

That could mean that the computers first flooded the market with sell orders that could not be matched with buyers. Then, just as quickly, many of these networks withdrew from trading. The combined effect might have set off a chain reaction that sent shares of many companies spiraling during the 15-minute frenzy.

Yves here. This is a poor explanation, and worse, may reflect a mischaracterization of the issues. The circuit breaker mechanism is a way of halting panicked selling, when volumes on the sell side become so overwhelming that the bottom drops out, and buyers rationally stand aside to see how far the downdraft will go before bidding. The fact that you could not get halts across all platforms is a problem (not that one was implemented, since after 2:30 PM, the NYSE does not allow for circuit breakers).

But the second is in the “hand by hand” v. computer contrast, which may be inapt drafting. The issue isn’t that the humans are SLOWER, it is that they serve a different function. NYSE specialists serve as market makers (they take a position, as in inventory risk. to keep a market functioning) while the computer systems simply match orders (in fairness, the article does say later the effort was made to shift orders over to the specialists, but orders were routed to electronic exchanges)

Contrast the reports at the Times and the Wall Street Journal, that the officialdom is pouring through the records and is still puzzled after a full three days on the case, versus this analysis produced by a lone sell-side analyst (who sadly must remain anonymous) roughly 24 hours after the implosion. Be sure to take note of the boldfaced section at the end (his emphasis):

Time to set the record straight. “Trader error” or “fat finger” may have been a catalyst for certain elements of yesterday’s action, and it may not have been. It may have been a “computer error” and it may not have been. Do you notice how we’re unwittingly restricting our analysis to what the sellers did? The offer side of the trading that saw the S&P 500 lose -5% of its value in the span of about 3 minutes – that after it had already declined by over -3% – is a RED HERRING. It’s misdirection – hand wringing over what is irrelevant at the expense of ignoring what is relevant…and what’s relevant is the bid side of the market, that is, what the buyers did.

Volume was gigantic yesterday before we really went into freefall. As of 2 p.m., some 40 minutes before Armageddon, we were tracking for a massive 15.6 billion share day (we ended up doing 19.3 billion – the second largest day ever after the October 10th, 2008 whitewash). Half an hour later, at 2:30 p.m. – still ten minutes before the bottom fell out – volume had surged and we were tracking for a 17.2 billion share day. The period between 2 p.m. and 2:40 p.m. saw immense selling pressure in both the cash market and the futures market, and that occurred with the E-minis still north of 1120. Check out the below graphs (click to enlarge). 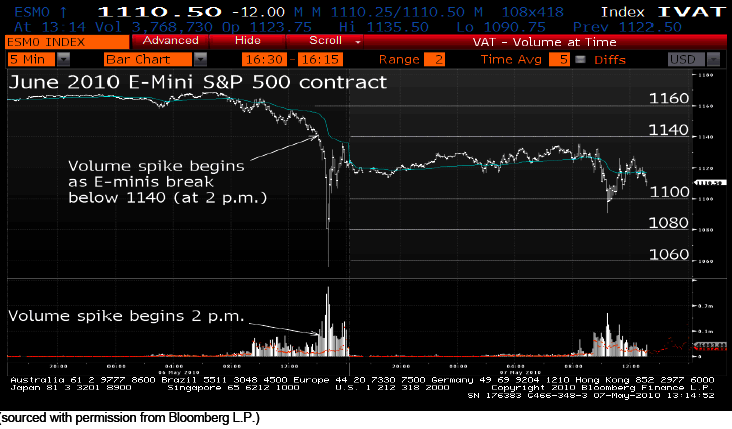 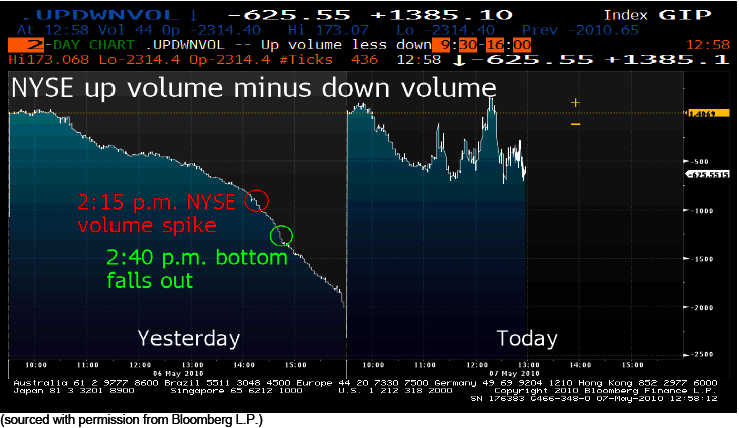 In other words, it was not a sudden, random surge of volume from a fat finger that overwhelmed the market. It was a steady onslaught of selling that pressured the market lower in order to catch up with the carnage taking place in the credit markets and the currency markets. Take a look at the chart below which clearly shows the surge in the yen preceding the drop in the stock market. 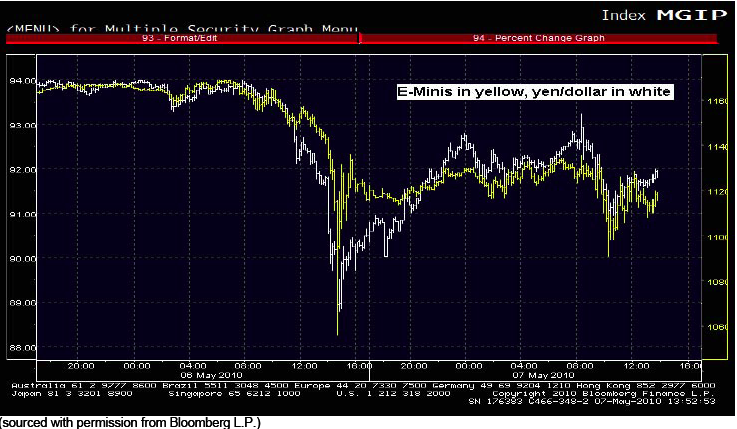 But what about the final thrust lower – the seeming air pocket? We know, thanks to our friends at CNBC who were fixated on this particular stock, that Proctor & Gamble tumbled by over -35% in the span of about 5 minutes. It’s impossible to tell by looking at a chart of the stock, but when you look at the individual prints you can see that this was not a case in which two or three “erroneous” prints marked the tape down to $39 before the stock sprang back to $60. I’ve got 28 pages in front of me of P&G prints that occurred between $39 and $50 per share and between 2:46 p.m. and 2:51 p.m. At 36 prints per page, that means P&G traded over one thousand times at those “crazy” and “surely erroneous” levels. I’m sorry, but that isn’t an error, THAT IS WHAT WE LIKE TO CALL TRADING. So what happened here? Three things:

1. Sellers probably had orders in algorithms – percentage-of-volume strategies most likely, maybe VWAP – and could not cancel, could not “get an out.” These sellers could be really “quanty” types, or high freqs, or they could be vanilla buy side accounts. It really doesn’t matter. The issue here is that the trader did not anticipate such a sharp price move and did not put a limit on the order. The fact that the technology may have failed does not mean the trader deserves a do-over, it means that the trader and the broker who provided the algorithm need to decide whether any losses should be split.

3. While the market was well offered, it was not well bid. Liquidity disappeared. For example, in P&G, 200 shares traded at $44.10 at 2:51:04 in the afternoon and one second later, at 2:51:05, three hundred shares traded at $47.08. That’s a three dollar jump in one second. Bids disappeared, spreads blew out, and no one was trading except a handful of orphaned algo orders, stop sell orders, and maybe a few opportunists who had loaded up the order book with low ball bids (“just in case”). High frequency accounts and electronic market makers were, by all accounts, nowhere to be found.

It boils down to this: this episode exposed structural flaws in how a trade is implemented (think orphaned algo orders) and it exposed the danger of leaving market making up to a network of entities with no mandate to ensure the smooth and orderly functioning of the market (think of the electronic market makers and high freqs who can pull bids instantaneously as opposed to a specialist on the floor who has a clearly defined mandate to provide liquidity).