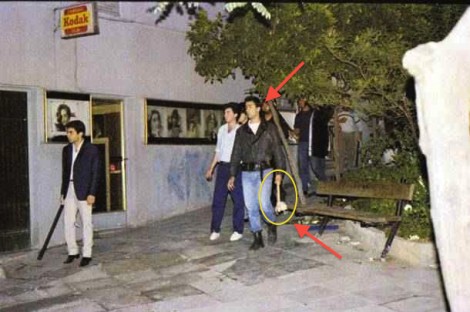 See the guy in the photo there, dangling an ax from his left hand? That’s Greece’s new “Minister of Infrastructure, Transport and Networks” Makis Voridis captured back in the 1980s, when he led a fascist student group called “Student Alternative” at the University of Athens law school. It’s 1985, and Minister Voridis, dressed like some Kajagoogoo Nazi, is caught on camera patrolling the campus with his fellow fascists, hunting for suspected leftist students to bash. Voridis was booted out of law school that year, and sued by Greece’s National Association of Students for taking part in violent attacks on non-fascist law students.

With all the propaganda we’ve been fed about Greece’s new “austerity” government being staffed by non-ideological “technocrats,” it may come as a surprise that fascists are now considered “technocrats” to the mainstream media and Western banking interests. Then again, history shows that fascists have always been favored by the 1-percenters to deliver the austerity medicine.

This rather disturbing definition of what counts as “non-ideological” or “technocratic” in 2011 is something most folks are trying hard to ignore, which might explain why there’s been almost nothing about how Greece’s new EU-imposed austerity government includes neo-Nazis from the LAOS Party (LAOS is the acronym for Greece’s fascist political party, not the Southeast Asian paradise).

Which brings me back to the new Minister of Infrastructure, Makis Voridis. Before he was an ax-wielding law student, Voridis led another fascist youth group that supported the jailed leader of Greece’s 1967 military coup. Greece has been down this fascism route before, all under the guise of saving the nation and complaints about alleged parliamentary weakness. In 1967, the military overthrew democracy, imposed a fascist junta, jailed and tortured suspected leftist dissidents, and ran the country into the ground until the junta was overthrown by popular protest in 1974.

That military junta—and the United States support for it (for which Clinton apologized in 1999)—is a raw and painful memory for Greeks. Most Greeks, anyway. As far as today’s Infrastructure Minister, Makis Voridis, was concerned, the only bad thing about the junta was that it was overthrown by democracy demonstrators. A fascist party was set up in the early 1980s in support of the jailed coup leader, and Voridis headed up that party’s youth wing. That’s when he earned the nickname “Hammer.” You can probably guess by now why Greece’s Infrastructure Minister was given the nickname “Hammer”: Voridis’s favorite sport was hunting down leftist youths and beating them with, yes, a hammer. 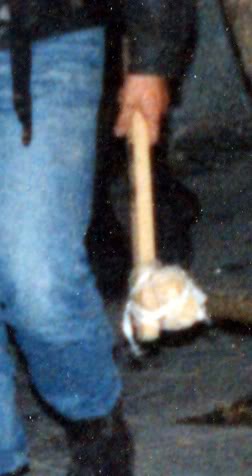 After the hammer, he graduated to law school– and the ax; was expelled from law school; and worked his way up the adult world of Greek fascist politics, his ax tucked under the bed somewhere. In 1994, Voridis helped found a new far-right party, The Hellenic Front. In 2004’s elections, Voridis’s “Hellenic Front Party” formed a bloc with the neo-Nazi “Front Party,” headed by Greece’s most notorious Holocaust denier, Konstantinos Plevis, a former fascist terrorist whose book, “Jews: The Whole Truth,” praised Adolph Hitler and called for the extermination of Jews. Plevis was charged and found guilty of “inciting racial hatred” in 2007, but his sentence was overturned on appeal in 2009.

By that time, Makis “Hammer” Voridis had traded up in the world of Greek fascism, merging his Hellenic Front Party into the far-right LAOS party, an umbrella party for all sorts of neo-Nazi and far-right political organizations. LAOS was founded by another raving anti-Semite, Giorgos Karatzeferis—nicknamed “KaratzaFührer” in Greece for alleging that the Holocaust and Auschwitz are Jewish “myths,” and saying that Jews have “no legitimacy to speak in Greece.” The Anti-Defamation League is going ballistic about it; for some reason, the media hasn’t taken notice, except in Israel.

Funny thing is, as far as LAOS party leader “KaratzaFührer” was concerned, while he liked Makis “Hammer” Voridis just as much as the next neo-Nazi, he was worried about what the public might think of putting “Hammer” up for elections on the LAOS party list. Here is LAOS party leader Karatzeferis explaining why to a newspaper last year (big HT to the Greek site “When The Crisis Hits The Fan” for this and much more):

Giorogos Karatzaferis: I was simply afraid that Voridis has a history which I have managed to cover after considerable effort…

Christos Machairas (journalist): What exactly do you mean by “history”?

Giorgos Karatzaferis: About his relation with Jean Marie Le Pen, the axes and all the rest. I am just thinking that suddenly, on the 30th of October (i.e. a bit before the local elections) some guy from New Democracy or from Tsipras’ team (i.e. SYRIZA leftist party) can throw a video on the air and drag me explaining about all these things.

See, that’s the problem with elections, referendums, democracy and the rest: You don’t really know just how qualified and technocratic a guy like Makis “Hammer” Vordis is, which is why it’s such a good thing that the banks instructed the EU to impose “Hammer” on Greece. To deliver some pain. It’s for their own good. And that is how today, thanks to the EU and the banking interests that control it, Makis “Hammer” Voridis is the new Infrastructure Minister.

Which brings me back to the history of Greece’s coups, and the talk of coups today. Readers who follow our “What You Should Know” section have been reading for months now about all sorts of strange things going on in Greece’s military, culminating with (now ex-) Prime Minister’s Papandreou’s decision to fire his entire military leadership. He fired them on November 1, the same day that he announced that he was putting the EU austerity program to a democratic referendum vote. Here is an account of the firings:

Meanwhile, in a development that has stoked fears of a potential military coup in the country, Papandreou on Tuesday also fired the entire high command of the armed forces along with some dozen other senior officers and replaced them with figures believed to be more supportive of the current political leadership.

The heads of the country’s general staff, army, navy and air force were all dismissed following the meeting of the Government Council for Foreign Affairs and Defence, the supreme decision-making body on national defense.

The ministry maintains that the change in the military high command had long been scheduled. But such reshuffles, which take place every two to three years, do not normally result in the dismissal of the entire leadership.

That came during a month of bizarre mass weapons purchases by the Greek military, with the creditor nations—France and the US—as the weapons sellers: In early October, we learned that the US was taking a breather from pushing austerity and bashing lazy Greek public employees to extend a new line of credit to Greece’s military:

According to information of the “Hellenic Defence & Technology” magazine, the U.S. authorities approved to grant 400 M1A1 Abrams tanks to the Greek Army, which will include options between simple refurbishment – worth tens of millions dollars for all the tanks- and upgrading to a higher level of operational capability, with a higher corresponding cost. The relative Letter of Offer and Acceptance (LOA) is expected soon.

Also according to exclusive information of the” Hellenic Defence & Technology” magazine, a Price and Availability letter was sent to U.S. authorities regarding 20 AAV7A1 and a low cost upgrade program for them. This is the first step to cover an operational requirement for 75-100 vehicles.

A couple of weeks later, France extended fresh lines of credit to the same military for desperately-needed stealth battleships, leaving Germany feeling angry and left out, according to Der Spiegel:

A huge arms deal is threatening to put French-German relations under strain. According to information obtained by SPIEGEL, France wants to deliver two to four new frigates to the Greek navy and to allow the highly indebted nation to postpone payment of the €300 million ($412 million) purchase price per ship for the next five years.

Under the deal, Greece will have the option of paying up after five years, with a significant discount of €100 million, or returning them to the French navy. The “stealth” frigates are designed to avoid detection by enemy radar and are built by state-owned French defense company DCNS.

The deal is being criticized by German rivals that have been competing for the contract for years.

That last part says it all: What pissed off the Germans wasn’t the profligacy, but losing out in a contract they’d been competing for. What this shows, again, is the lie of “austerity”: They pretend that Greece is too deeply in debt to borrow another penny, yet think nothing of lending a few hundred million to the military.

Looking back at the last-minute maneuvers, it seems pretty clear that Papandreou’s decision to fire all the military leaders on the day he announced his referendum on austerity—his attempt to counterbalance Western banker power and local military power with democratic people power–was essentially an imperialist power-struggle in an uppity colony, whose inhabitants are seen as little more than sources of extraction for banker profits. So we have the creditor nations trying to buy off the military as Banker D(efault)-Day approaches, and Papandreou trying to counter that by both bending to their will, realizing he’s through, and trying to save himself by empowering the people in his country. But Papandreou was far too weak and far too compromised. Ultimately he was no match; he never had a chance. And the popular will of Greece’s citizens is barely an afterthought.

This is how bankers deal with banana republics; it’s how they ran their colonies. Take care of the military, give them gifts and get them in your pocket. The people only exist to be extracted. And when they squeal, characterize them the way the Brits characterized the Irish during the Great Famine: lazy, profligate, it’s all their own fault, what they need is more painful medicine and a swift kick in the ass…for their own good, of course.

And just in case it wasn’t clear to everyone, Forbes magazine came out in favor of a coup. Here is how one Greek columnist reported it:

“Instead of pouring euros down the drain, it would be much wiser for Germany to sponsor a military coup and solve the problem that way.” No, this extract is not from a fascist blog. It is from Forbes magazine and it’s just another one of the provocative articles that follow this insane ongoing anti-Greece campaign of international media.

In the end, the bankers and the West got their coup. And they didn’t need an ugly military spectacle to make it happen. Papandreou was overthrown, the referendum was withdrawn, an austerity regime put in place to carry out the bankers’ demands, without democracy getting in the way. Nice ‘n’ clean.

Not only did the West get its coup, but fascists like Makis “Hammer” Voridis got what they’ve been struggling for all their lives: Power, and vindication for far-right nationalism over democracy.

That’s where we are today. Greece drowning in debt, its democracy broken, and despite fighting the Nazis in World War Two, and taking back democracy from a fascist junta in 1974–in the end, it was the EU and the Western banks that put a guy like Makis “Hammer” Voridis, the guy who patrolled his law school with a makeshift ax, in power, administering banker-pain. 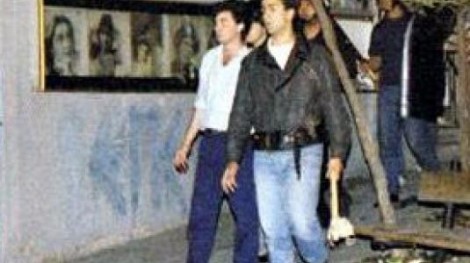 The implications of the EU and bankers forcing Greece, the birthplace of democracy, to cancel a popular plebiscite as “irresponsible,” forcing instead an austerity regime composed partly of neo-Nazis fascists to administer more “pain”–is something that should frighten the shit out of everyone. Because like it or not, we’re all in the cross-hairs of the same banking interests, and we’re all going to face it again and again. Greece just happens to be the first in line.