By Andrew Horowitz who writes at The Disciplined Investor

It is Monday and we know that means either Merger Monday, Mutual Fund Monday or even Magical Monday 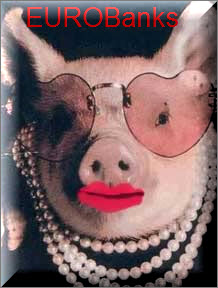 Well, it was surely a big volume morning as most traders are back to their desks. As China released their production numbers along with CPI, Asian markets were quite happy to see that while there is a slowing, it is leveling off. Last week we saw the charts and a question as to whether China will raise their deposit rates to try to cool inflation (which rose at the fastest pace in 22 months). 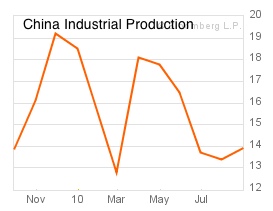 It is obvious that there will be discussions about the accelerating loans and level of inflation as the Chinese government has been putting additional mechanism in place to slow growth. Now it is apparent that they are beyond their target inflation rate. It is possible that over the next few days we will see an increase in the deposit rate to show a sign that they mean business. 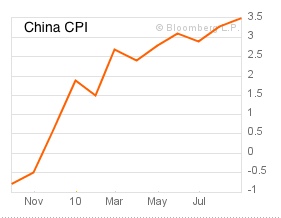 Just one week later, there is investor hope for the Euro Region banks. The Basel III rules were tougher, but put on a significant time extension for banks to comply. That will allow for business as usual for some time to come. Once again, it is allowing for the continuation of bad behaviors to be essentially covered up. Lipstick on the PIIGS again!

Investors came back with bullish intentions on Monday, but just how far will that go with the knowledge that the U.S. continues to slow and the numbers out of China were just “less bad?”

Tuesday starts the U.S. economic releases off with a bang – upcoming this week are advanced retail sales, business inventories, initial claims, consumer confidence, among others. Should be a fun show! 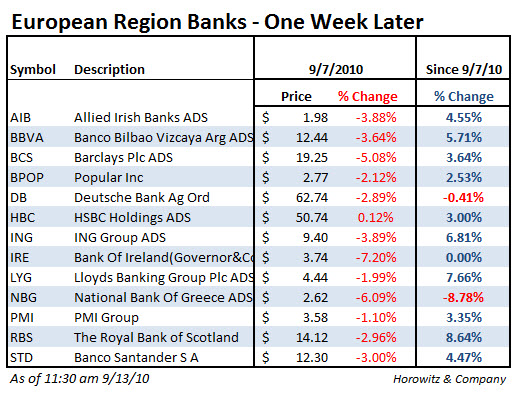 Financial stocks are in focus today after the Basel Committee on Banking Supervision announced new capital requirements for internationally active banks. The new rules have been taken as a positive by the market, as they didn’t contain any major negative surprises, and they laid out a long implementation period that will phase in the stricter requirements over the next 9 years. Financial stocks led the rally overseas and are one of the strongest sectors in the U.S. today.

The new rules will require banks to hold levels of common equity of at least 7% of their assets by January 1, 2019, up from 4% in the U.S. and just 2% internationally. Specifically, the minimum common equity requirement goes up to 4.5%, and banks will be required to hold a capital conservation buffer of 2.5% to withstand future periods of stress bringing the total common equity requirements to 7%. The new rules will be phased in over the next 9 years to allow banks to gradually build their reserves, because of the fragile ground banks currently stand on as they recover from the global financial crisis.

Asian markets rose overnight, also aided by Chinese economic data for August that, while in-line, showed the country’s economy is still growing at a steady pace.