The mass movement for democracy that has led to the exile of Ben Ali in Tunisia paved the way to a new awakening and raised many hopes in North Africa and the Middle East. This column reports on recent research on the historical experiences of countries that democratised during the “third wave”, to shed some light on the prospects for the future of the Arab region.

The mass movement that ousted Tunisia’s President Zine al-Abidine Ben Ali was the first case in modern history in which an Arab leader was toppled by a popular uprising. This unprecedented event has triggered similar protests in neighbouring countries and led to the overthrow of President Hosni Mubarak in Egypt, to turmoil in Bahrain, Algeria, and Yemen, and to an ongoing civil conflict in Libya.

The concept of a new “Arab awakening” as being the spread of democratic ideas has been evoked by Laurence Pope in The New York Times (2011)among others. But what are the chances of having truly democratic and inclusive societies in these countries? The historical evidence suggests that a key part of the answer may lie in the actual modes of regime change and, in particular, in the level of violence associated with the democratic transition.

Tunisia’s “Jasmine revolution” and the upheaval in the other Arab countries have their roots in the growing discontent of the economically and politically disadvantaged segments of the population. In particular the fast population growth has led to widespread frustration among the young generations, with youth unemployment rates approaching 30% in many countries of the region.
These tensions have been reinforced by the recent global economic crisis and the economic difficulties throughout the region. In a Vox column just over two years ago, Ciccone (2009) reported research suggesting that a negative income shock of 5% raises the likelihood of civil conflict by 15 percentage points. In the case of the Arab countries, the short-term economic downturn was also coupled with sharply rising food prices that have seriously threatened food security.

Despite sharing similar structural determinants of discontent, it is already apparent that the (attempted) regime transitions are taking very different paths in different countries. While in some cases the mass movements have succeeded in opening up the possibility for a rapid and peaceful regime change, in others the path towards democracy is faced with stronger resistance by parts of the ruling elites and appears longer, more uncertain, and stained with blood.1 Will these different transition modes make a difference for the features of the emerging democracies?

Assessing the impact of the transition scenario

Recent academic research suggests that, unfortunately, this may well be the case.
Samuel Huntingdon (1993) provides an analysis of regime transitions during, what he calls, the “third wave” of democratisation. He concludes that violent uprisings are less likely to lead to a regime change and, if it the shift does take place, they may lead to worse democracies. In a 2007 paper (Cervellati et al. 2007), we develop a theory of endogenous democratisation that analyses the determinants of different transition scenarios and their consequences for the features of emerging democracies.

This theory predicts that transitions to democracy under a broad consensus in the population foster the establishment of democracies with good institutional quality, because the individual behaviour can be coordinated along the transition process. In more recent work Cervellati et al. (2011) broaden this view by investigating the incentives of the different social groups to engage in violence, and by studying the role of openly violent conflict during the democratisation process for the features of the emerging democracies. The institutional quality of democracy being determined endogenously, the theory predicts that violent transitions to democracy are less likely to lead to “good quality democracies” with large protection of economic and political liberties. The results also suggest that a minimum consensus among the population is required for the emergence of a well-functioning democracy and that peaceful transitions are more likely if the economic interests of the population are fairly aligned. This is the case if, e.g., the lootable (natural) resources are not a major factor of the economy, and if economic power is not concentrated among very small oligarchic elites.

The prediction that the level of violence which characterises the regime transition may persistently affect the future prospects of democracy is consistent with the empirical evidence from the “third wave” of democratisation over the period 1970-2003. Using information about civil conflicts of different types and intensity from the Peace Research Institute in Oslo (Harbom and Wallensteen 2010) and information on the level of violence during democratisation provided by Freedom House (2005), we estimate the effect of violence during transition on the quality of the emerging democracy in terms of civil liberties.Extending the empirical strategy of Papaioannou and Siourounis (see their 2008 Vox column) considering the differential effects of violent and non-violent transitions and applying it to civil liberties, we are able to look at within-country variation in the timing of democratic transitions. 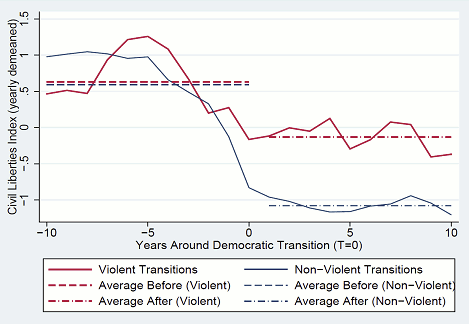 These findings are robust when conditioning on a rich set of control variables and emerge consistently throughout different specifications, and when conflict incidence in a particular year or lagged institutional quality are added as additional controls. In terms of the determinants of democratisation scenario, the evidence also suggests that higher inequality before the transition is associated with a significantly larger likelihood of violent civil conflicts during the regime change. These results complement previous research that predicts and documents significant interactions between inequality and political freedom for the quality of democracies (Cervellati et al, 2008 and Sunde et al, 2008).

Our research investigates the determinants and consequences of democratic transitions. The results suggest that peaceful transitions to democracy lead to democracies with better average protection of property rights and civil liberties as compared to democracies that emerge after violent conflicts. The evidence from the “third wave” of democratisation also suggests that countries that rely less on natural resources and have lower inequality are more likely to experience nonviolent democratic transitions. Concerning the prospects of the new Arab awakening, it is by now clear that the regime shifts will follow different transition paths in different countries. Taking the experience from the third wave of democratisation seriously, the prospects for the countries currently involved in the most violent conflicts do not look as bright.