Yves here. Reader sidelarge raised the issue yesterday in comments, of UC Davis chancellor Linda Katehi’s role in abolition of university asylum in Greece. The story is even uglier than the link he provided suggests. 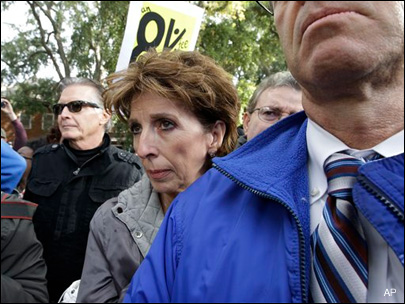 A friend of mine sent me this link claiming that UC Davis chancellor “Chemical” Linda Katehi, whose crackdown on peaceful university students shocked America, played a role in allowing Greece security forces to raid university campuses for the first time since the junta was overthrown in 1974. (H/T: Crooked Timber) I’ve checked this out with our friend in Athens, reporter Kostas Kallergis (who runs the local blog “When The Crisis Hits The Fan”), and he confirmed it–Linda Katehi really is the worst of all possible chancellors imaginable, the worst for us, and the worst for her native Greece.

First, some background: Last week, The eXiled published two pieces on Greece’s doomed struggle against global financial institutions—an article on how the EU and Western bankers essentially overthrew the nearly-uppity government of prime minister George Papandreou, and replaced it with a banker-friendly “technocratic” government that includes real-life, no-bullshit neo-Nazis and fascists from the LAOS party, fascists with a banker-friendly fetish for imposing austerity measures. One of those fascists, Makis “Hammer” Voridis, spent his early 20s “hammering” non-fascist students for sport. Voridis was booted out of Athens University law school after ax-bashing fellow law students who didn’t share his fascist ideology. Today, Mikaes Voridis is the Minister for Infrastructure in the “technocratic” government. Imagine Lt. John Pike in leather and an 80s hairdo, carrying a homemade ax rather than a pepper spray weapon, and you have Makis “Hammer” Voridis.

We also published a powerful and necessary history primer by Greek journalist Kostas Kallergis on the almost-holy significance of the date November 17 in contemporary Greek history. On that day in 1973, pro-democracy students at the Athens Polytechnic university were crushed by tanks and soldiers sent in by the ruling junta dictatorship, which collapsed less than a year later, returning democracy to Greece. With CIA backing, the generals in the junta overthrew Greece’s democracy in 1967, jailed and tortured suspected leftists (meaning students and union leaders), and even went the extra-weird-fascist mile by banning the Beatles, mini-skirts, long hair, along with Mark Twain and Sophocles. The student rebellion at the Polytechnic, and its martyrdom, became the symbol for Greeks of their fight against fascism and tyranny, something like the briefcase man at Tiananmen Square, or the slaughtered rebels of the Boston Tea Party Massacre. That is why, as soon as the junta was overthrown and democracy restored in 1974, Greece immediately banned the presence of army, police or state security forces on university campuses. This so-called “university asylum” law turned Greece’s university campuses into cop-free zones of “political asylum,” where no one could interfere in the students’ rights to dissent against the government. 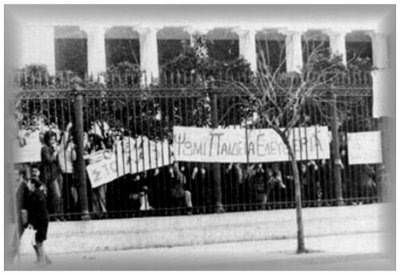 Athens Polytechnic uprising against junta: Try to find Linda Katehi in this photo

Today, thanks in part to UC Davis chancellor “Chemical” Linda Katehi, Greek university campuses are no longer protected from state security forces. She helped undo her native country’s “university asylum” laws just in time for the latest austerity measures to kick in. Incredibly, Katehi attacked university campus freedom despite the fact that she was once a student at the very center of Greece’s anti-junta, pro-democracy rebellion–although what she was doing there, if anything at all, no one really knows.

Here’s the sordid back-story: Linda Katehi was born in Athens in 1954 and got her undergraduate degree at the famous Athens Polytechnic. She just happened to be the right age to be a student at the Polytechnic university on the very day, November 17, 1973, when the junta sent in tanks and soldiers to crush her fellow pro-democracy students. It was only after democracy was restored in 1974–and Greek university campuses were turned into police-free “asylum zones”–that Linda Katehi eventually moved to the USA, earning her PhD at UCLA.

Earlier this year, Linda Katehi served on an “International Committee On Higher Education In Greece,” along with a handful of American, European and Asian academics. The ostensible goal was to “reform” Greece’s university system. The real problem, from the real powers behind the scenes (banksters and the EU), was how to get Greece under control as the austerity-screws tightened. It didn’t take a genius to figure out that squeezing more money from Greece’s beleaguered citizens would mean clamping down on Greece’s democracy and doing something about those pesky Greek university students. And that meant taking away the universities’ “amnesty” protection, in place for nearly four decades, so that no one, nowhere, would be safe from police truncheons, gas, or bullets.

Thanks to the EU, bankers, and UC Davis chancellor Linda Katehi, university freedom for Greece’s students has taken a huge, dark step backwards.

Here you can read a translation of the report co-authored by UC Davis’ Linda Katehi–the report which brought about the end of Greece’s “university asylum” law.What’s particularly disturbing is that Linda Katehi was the only Greek on that commission. Presumably that would give her a certain amount of extra sway–both because of her inside knowledge, and because of her moral authority among the other non-Greek committee members. And yet, Linda Katehi signed off on a report that provided the rationale for repealing Greece’s long-standing “university asylum” law. She basically helped undo the very heart and soul of Greece’s pro-democracy uprising against the junta.

And perfect timing too, now that one of Greece’s most notorious pro-junta fascists is a member of the new austerity government. 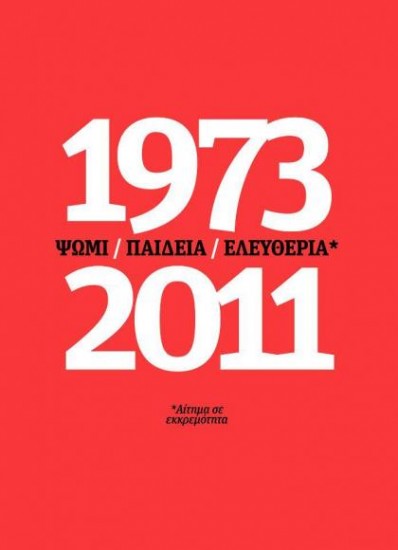 One more thing: Kallergis did a search in the Greek language of Linda Katehi’s interviews to see what she had to say about her experience at the Polytechnic in 1973, what she remembered of it, and how it affected her. What he found was troubling to say the least.

The interview in Greek with Linda Katehi can be found here at this American Greek site. Our man in Athens, Kostas Kallergis, picked out two specific questions about November 17, 1973, and Linda Katehi’s answers–if you can call these answers. Here are the questions and answers, with Kallergis’ translations and comments, which he provided to The eXiled:

Q: “You studied during a very politically polarized period in Greece and many of your fellow students did not stay still/dormant. Did you get involved in the political developments?”

Linda Katehi: “Of course, as everybody else. How could that upheavel leave you indifferent?”

Kallergis comments: “Katehi is offered an opportunity to give an account of her political activities of that time, and yet she only replies with a vague, very general answer. It seems very odd.”

Q: Are you involved in politics now?

Linda Katehi: I have never been involved in politics.

Kallergis comments: “I guess you can see the contradiction… they are both from the same single interview.”

She’s the right goon for the right time: As Yasha Levine reported two years ago, UC students have been battling against rapacious austerity measures jacking up their fees in order to pay back Wall Street bankers who bet and lost UC pension funds. That’s a big reason why UC students are fed up and Going Occupy. And “Chemical” Katehi’s answer is the sort of answer banksters like hearing: Stomp out dissent and squeeze every last drop of juice out of them that you can. 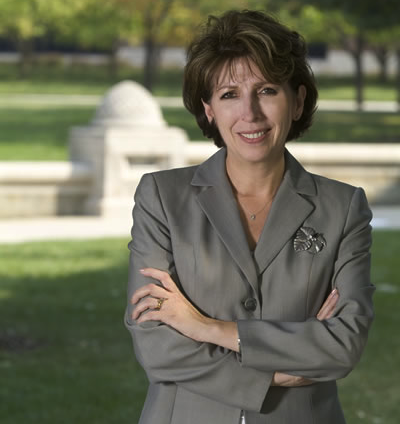 You always expect your monsters to look like monsters and talk like monsters; but the best, most effective vehicles for evil are always these anti-matter humans, these hollow voids, the “nothing person” that the great Russian writer Yuri Trifonov described so mercilessly and perfectly in House on the Embankment.

Indeed, just like Greece. How can anyone live without you people.