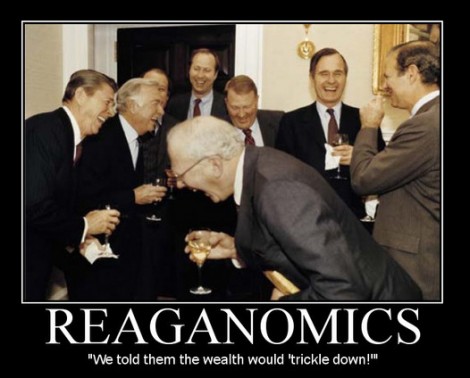 Another Monday, another “deficit crisis” panic. If you haven’t got the feeling yet that you’re being played like a sucker over this alleged “deficit crisis,” then let me help you cross that cognitive bridge to dissonance. It comes in the figure of the recently-deceased William Niskanen, the embodiment of how Reaganomics and the Koch brothers’ libertarian movement were joined at the hip. Niskanen was an advisor to Ronald Reagan throughout the 1970s; a board director for the Koch-founded Reason Foundation; a member and chairman of Reagan’s Council on Economic Advisers from 1981-85; and he moved directly from Reagan’s side back to the Koch brothers’ side, as chairman of the libertarian Cato Institute from 1985 until 2008.

This is a brief story about how the 1% transformed this country into a failing oligarchy, and their useful tools, starting with A-list libertarian economist William Niskanen, Chicago School disciple of Milton Friedman, advocate of the rancid “public choice theory.”

First, let’s go back to December, 1981, and news is leaking out that Reagan’s supply-side tax cuts for the rich, combined with huge increases in defense spending, caused an explosion in the deficit to unimaginable levels, from Carter’s projected deficit of $27 billion to a real deficit of $109 billion and climbing fast–this, despite the fact that Reagan ran as a “responsible” deficit hawk. Someone needed to rationalize that deficit away, and the job fell to none other than CEA director and future Cato Institute chairman Niskanen, as reported in the AP on December 9, 1981:

Faced with record-smashing deficits that could top $100 billion a year, the Reagan administration now says it can live with a torrent of red ink without reversing its strategy against inflation and high interest rates.

In a turnaround from President Reagan’s longstanding assertion that deficits are a cause of inflation, senior White House economic advisers yesterday sought to downplay that relationship. One member of the Council of Economic Advisers, William A. Niskanen, suggested the connection is virtually nonexistent. 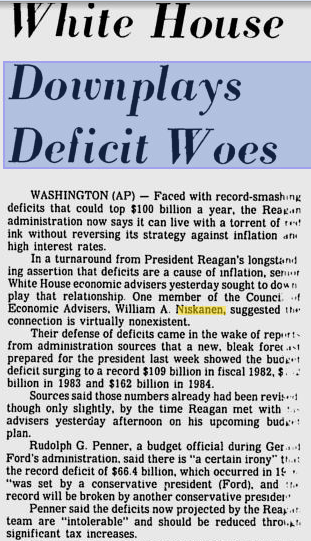 Actually, what Niskanen said was this: “The simple relationship between deficits and inflation is as close to being empty as can be perceived.”

And this: “There are no necessary relationships between the deficit and money growth.”

And this: “Evidence doesn’t support” the assertion that deficits crowd out private borrowers.

And finally, William Niskanen, one of the leading libertarian figures of the past four decades, said this about deficits: “The economic community has reinforced an unfortunate perspective on the deficit which is not consistent with the historical evidence…It is preferable to tolerate deficits of these magnitudes either to reinflating [the money supply] or to raise taxes. Other things being equal, I would like to see lower deficits too, but other things are not equal.”* 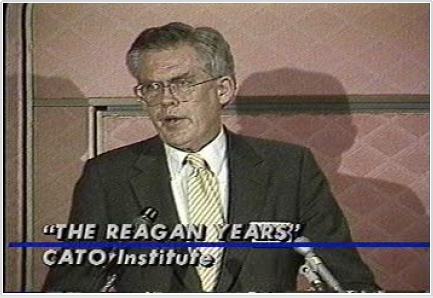 That glib, “hah-hah we fooled you!” attitude towards federal deficits–the same deficits Reagan’s people used to scare the shit out of Americans in the 1980 elections–was captured best by Ronald Reagan himself, who in 1984 quipped, ”I am not worried about the deficit. It is big enough to take care of itself.”

Hardy-har-har. Such a charming guy.

Even Der Austerity-führer himself, Friedrich von Hayek, bragged in 1985 that the deficit scare was purely political–you can almost see the little troll rubbing his troll hands together gleefully as he brags about his master plan’s success:

After remarking that his work had influenced by Reagan and Prime Minister Thatcher of Great Britain, that many of the president’s advisers had come from “circles I am acquainted with,” and that he was wearing a set of cuff links given to him by Reagan, the economist [von Hayek] commented:

“I really believe Reagan is fundamentally a decent and honest man. His politics? When the government of the United States borrows a large part of the savings in the world, the consequence is that capital must become scarce and expensive in the world world. That’s a problem.”

But, von Hayek continued, “You see, one of Reagan’s advisers told me why the president has permitted that to happen, which makes the matter partly excusable: Reagan thinks it is impossible to persuade Congress that expenditures must be reduced unless one creates deficits so large that absolutely everyone becomes convinced that no more money can be spent.”

Thus, the economist said, Reagan “hopes to persuade Congress of the necessity of spending reductions by means of an immense deficit. Unfortunately, he has not succeeded.”

The way von Hayek brags that he and his little circle of free-market Nazis swindled the world is just stunning–really stunning, as in it’s almost impossible to respond to it’s so vile. But as Yasha Levine and I reported in The Nation in September, swindling the public and shameless hypocrisy–that’s how Friedrich von Hayek, and his sponsor Charles Koch, roll:

Publicly, in academia and in politics, in the media and in propaganda, these two major figures—one the sponsor [Koch], the other the mandarin [Hayek]—have been pushing Americans to do away with Social Security and Medicare for our own good: we will become freer, richer, healthier and better people.

But the exchange between Koch and Hayek exposes the bad-faith nature of their public arguments. In private, Koch expresses confidence in Social Security’s ability to care for a clearly worried Hayek. He and his fellow IHS libertarians repeatedly assure Hayek that his government-funded coverage in the United States would be adequate for his medical needs.None of them—not Koch, Hayek or the other libertarians at the IHS—express anything remotely resembling shame or unease at such a betrayal of their public ideals and writings. Nowhere do they worry that by opting into and taking advantage of Social Security programs they might be hastening a socialist takeover of America. It’s simply a given that Social Security and Medicare work, and therefore should be used.

Like typical Randroid libertarians, they find the public’s gullibility and good faith contemptible. This is something that Americans still can’t get their heads around about the free-market libertarians who’ve ruled us and ruined us over the past three decades. Here, for example, is how a middle-of-the-road guy, New York Times columnist Tom Wicker, described von Hayek’s cynical boasting about the big deficit swindle back in 1985:

While some Americans may agree that a shrunken government makes a deliberately created deficit “partly excusable,” such a deficit still reflects a reckless deception with worldwide consequences yet to be calculated. And congressional Democrats should realize the source of the pressure they’re under to sell their political birthright.

Poor earnest Tom Wicker’s problem here, we all know now, is his lack of rank cynicism; he still believes that these people care about “consequences” for anyone but themselves; he still believes in fantasy-Democrats who will “wake up” or get wise to the swindle. Keep waiting, Mr. Wicker. Yep, they’ll get wise all right.

A couple more things I want to say about Niskanen, who just died a few weeks ago of a stroke (he was still chairman emeritus of the Cato Institute up to his last breath). He not only was a cynical bastard who helped screw this country over, but he also had that other nauseating libertard trait: The faux-maverick contrarian dickhead trait.

In October 1984, just weeks before the election between Reagan-Bush and Mondale-Ferraro, libertarian economics adviser William Niskanen spoke before a meeting of women’s groups to tell them that the wage gap was all their own fault, if it even existed at all:

Wage Plan Is Labeled As “Crazy”

Niskanen, a member of the president’s Council of Economic Advisers, also told a meeting of Women in Government Relations that the wage gap between the sexes was largely due to women interrupting their careers for marriage and children.

…Niskanen was asked for elaboration by one woman in the audience who said his remark had caused “bristling in the back of the room.”

“Comparable worth is an idea whose time, I think, has long passed,” he responded, adding it was based on the “rather medieval concept of a just pay and a just wage.”

Mondale’s response when he heard what Niskanen said is poignant, because it’s pretty much every sane American’s response to every batshit crazy, pernicious idea and “maverick” poison that Republicans and libertarians have been puking on this country–like that spitting dinosaur in Jurassic Park–for lo these past few decades. Here’s Mondale’s reaction:

“He said that?” Mondale asked incredulously.

Yep, he sure did. 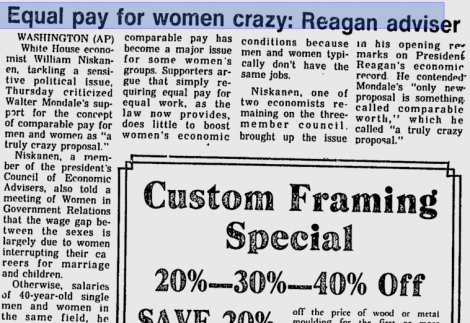 You know what makes Niskanen so cool? He’s not “politically correct.” Nosiree, he’s a mavericky maverick (when he isn’t pushing his nose deep up Charles Kochs’ ass, that is)

In 1985, Niskanen left Reagan’s side for the comfort of a lifelong sinecure in the Koch welfare program, safely protected from the ravages of the free-market, just like Hayek, just like all the pus-humpers in the libertarian nomenklatura.

And within a year, chief pus-humper himself, William Niskanen, chairman of the libertarian Cato Institute, was attacking Catholic bishops for daring to allege that Christianity is not all about free-markets and enriching the 1-percent:

A former economic adviser to President Reagan says the nation’s Roman Catholic bishops are ignoring the Bible as well as sound economics in their call for more government help for the poor.

…In a lengthy teaching letter approved last month, the bishops declared that significant poverty in such a rich nation is “a moral and social scandal that must not be ignored.” They said government as well as individuals and businesses should do much more to help the poor and powerless take part in economic life.

Niskanen, identifying himself as “an economist and a Protestant,” said, “one has reason to question the moral authority of a letter that has little apparent basis in the Scriptures of our shared religious heritage. The letter seeks to provide an agenda for the state. The New Testament is a message of individual salvation through Christ,” he said. “The bishops encourage us to seek justice through political action. Jesus counsels us that the Kingdom of God is not of this world.’ The central theme of the letter is economic justice. The New Testament provides no concept of secular justice, economic or otherwise,” he said.

Now William Niskanen is dead. For all I know, Niskanen may be in Heaven, bouncing on Calvin’s lap. Or maybe–one hopes–he’s dealing with a very Guantanamo-like wrathful god. The only thing we can say for sure is that William Niskanen did everything possible to create a kind of Hell on earth for the 99% of Americans who weren’t as blessed with Koch-funded sinecures as he.

May the bastard writhe in pain.