By Mark Ames, the author of Going Postal: Rage, Murder and Rebellion from Reagan’s Workplaces to Clinton’s Columbine. Cross posted from The eXiled. 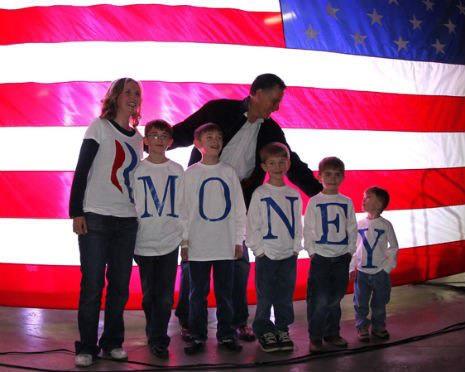 Last week it finally started to dawn on the slow-as-Stegosaurs media: Why is Ron Paul going so soft on frontrunner Mitt Romney, his natural ideological opposite? Dr. Paul has been flaying every other candidate, particularly when that candidate threatens Romney’s front-runner status—why is Ron Paul so protective over internationalist/neocon Rockefeller Republican, Mitt Romney? Does this point to some sort of alliance between the two? And if so, doesn’t that raise further disturbing questions about the supposed rock-solid-principles guiding Ron Paul’s campaign?

You might expect the media—alerted to this “bizarre” alliance—to go looking for a possible money trail linking the two campaigns’ interests together. This is politics after all; stranger things have happened. Naturally the media has done no such thing. But if the hacks ever do get around to following the money, they would very quickly stumble across one of the biggest WTF factoids of this primary season: Ron Paul’s SuperPAC, “Endorse Liberty,” is headquartered in Mitt Romney’s backyard: Salt Lake City, Utah.

Moreover, the SuperPAC’s staff and founders include several former Romney supporters and Huntsman supporters. And one of the founding principles of Endorse Liberty, Ladd Christensen, is something of an oligarch in Utah: Christensen is the longtime business partner of John Huntsman’s billionaire dad. They founded Huntsman Chemicals together, as well as Hunstman-Christensen.

Huntsman endorsed Mitt Romney when he bowed out of the race—in fact, Huntsman has a history of stepping aside for Mitt Romney and playing his second banana, going back at least to the Salt Lake City Olympics in 2002, which John’s billionaire dad helped to fund on behalf of Mitt Romney.

So to repeat: Ron Paul’s SuperPAC is based in Salt Lake City, and one of the founders is Ladd Christensen, John Huntsman’s business partner in Huntsman-Christensen and Huntsman Chemicals.

Nothing to see here folks, keep moving along…

That might raise some potentially disturbing possibilities to a journalist or editor still interested in chasing down disturbing details and stories. Which probably explains why the media hacks aren’t interested in pursuing this possible angle, even though it’s staring them in the face. Instead, they’re trotting out a catalogue of fatuous “explanations” for the love-fest between Dr. Paul and Mitt Romney—explanations which have almost nothing to do with money and sleaze in politics, and everything to do with how Tiger Beat magazine might approach this election campaign.

The New York Times opined that the Libertarian hero’s alliance with the Rockefeller Republican is all about their wives. It even has a Spielberg-esque headline – “Amid Rivalry, Friendship Blossoms on the Campaign Trail” – designed to make everyone feel all warm inside about how American politics works. And wouldn’tcha know it, politics it turns out works just like in the sitcoms:

The candidates’ spouses, Ann Romney and Carol Paul, “know each other better than any of the other wives,” Mr. Paul said. He and Mr. Romney talk “all the time” and “we’ve met all their kids.” Once he telephoned Mr. Romney just as Mr. Romney was calling him. “Sometimes I’m never sure who issued a call,” he said.

Mr. Paul has already provided some tactical help: When Mr. Romney began to flounder in South Carolina and was under attack over his career in leveraged buyouts, Mr. Paul came to his defense, suggesting that his critics were anticapitalist. His campaign even issued a press release assailing other rivals for, in Mr. Paul’s view, taking Mr. Romney’s quote about firing people out of context.

In other words, if you’ve seen The Flintstones or The Honeymooners, that’s all the background you need to understand the deep politics of Ron Paul’s strange alliance with his ideological foe and primary opponent, Mitt Romney. 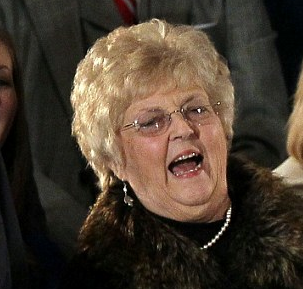 Not to be out-dumbed, the Washington Post also explored Dr. Paul’s touching friendship with the silver-spoon Mormon frontrunner, and found a life-affirming story about Americans from different sides of the railroad tracks coming together by finding how much they had in common deep down. The Post‘s Hollywood rom-con story was headlined “For Romney and Paul, a strategic alliance between establishment and outsider” and it featured deep insights like,

Despite deep differences on a range of issues, Romney and Paul became friends in 2008, the last time both ran for president. So did their wives, Ann Romney and Carol Paul. The former Massachusetts governor compliments the Texas congressman during debates, praising Paul’s religious faith during the last one, in Jacksonville, Fla. Immediately afterward, as is often the case, the Pauls and the Romneys gravitated toward one another to say hello.

Wrong-about-everything guy Charles Krauthammer assures America that although “they are objectively allies” nevertheless “it’s not because it’s a conspiracy or collusion or because, people will say, the wives are close.” Anyone familiar with Krauthammer’s record should as a matter of reflex automatically assume it’s a conspiracy and it’s all because their wives are close. (A question for Krauthammer: How is it possible that there can be an “alliance” involving no collusion? Stupid question, I know.)

To be fair to Krauthammer (not that anyone should be), he advances a more “reasonable” dumbshit-theory than the Wilma:Betty::Ann:Carol wives theory: According to Krauthammer and some others, the Paul-Romney love-fest is all about making Ron Paul the “Number Two” guy in the Republican Party. As if this is something Ron Paul and Mitt Romney work out on their own, without the massive powerful interests behind them, or the Republican Party machine, or anyone—just a couple of guys with some homespun desires and their wives in tow.

Give MSNBC’s Joe Scarborough some credit at least: He at least isn’t buying the bullshit and demanded answers about the “bizarre” alliance between Paul and Romeny:

“The thing that went unspoken but everybody knows, and that is that Mitt Romney and Ron Paul have formed an alliance,” Scarborough said. “It is such an obvious alliance that Mitt Romney would do well to just come out and admit it. I don’t know what he’s promised Ron Paul. I don’t know if Ron Paul is hoping that his son gets in the administration. But let’s just be really honest here — for all the people for Ron Paul to form an alliance with in the Republican Party, to pick out Mitt Romney is really bizarre.” 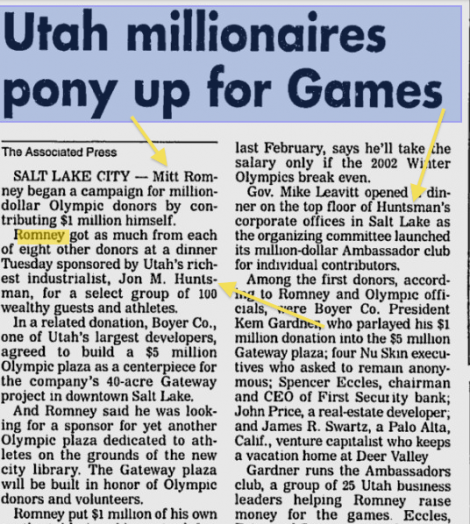 One can argue that the Romney-Paul alliance everyone’s talking about can be explained by heartwarming personal relationships, or by the laughable hope that Rand Paul will be put on the Romney ticket, or by the sort of vague idea that by playing favorites, Dr. Paul will become the “number two” in the party. But that doesn’t make a lot of sense—Ronald Reagan didn’t become the “number two” in 1976 by treating Gerald Ford with kid gloves; nor did George Bush Sr. in 1980, when he coined the phrase “voodoo economics” thrashing Reagan. It’s possible—monkeys exuent ex-buttium-Ronius Paulius is also possible—but it’s certainly not logical.

Another possibility, as I suggested, is money/oligarchy. You know, those things we all agree now that control our politics. That is why I would suggest that while there may be nothing to it at all, that at the very least it’s worth looking into why Ron Paul’s SuperPAC is headquartered in Salt Lake City, Utah—you know, the capital of Mormonstan, where Romney’s power and influence runs, as you might imagine, fairly strong. Of all the places in the United States isn’t it a little bit odd that the Ron Paul SuperPAC is based in Mitt Romney’s tribal motherland? Is it really so much to ask the media, all abuzz about the Romney-Paul alliance, to appropriate just a tiny bit of their resources into real investigative journalism, rather than more of the same fatuous, shallow celebrity-magazine fluff?

A few more details to consider here, in case you’re curious and not satisfied with the “our wives made us do it” theory:

* Ron Paul’s SuperPAC sugar daddy, Peter Thiel, whom I wrote about for The Nation, has a proven track record of using his money to play the cynical game of politics. According to a recent San Francisco Chronicle profile, “libertarian” Peter Thiel is funding a Democrat and former Obama trade official, Ro Khanna, in a primary challenge against anti-war, anti-PATRIOT Act liberal Democrat Congressman Pete Stark.

* Dr. Paul’s SuperPAC sugar daddy Thiel also donated the maximum allowable to the 2010 gubernatorial campaign of Meg Whitman, who was Mitt Romney’s campaign finance chair in 2008. Whitman was a protege of Romney’s when she worked at Bain capital; later, when Whitman was CEO of eBay, she made Peter Thiel rich when she bought out his PayPal in a deal roundly slammed as bad for eBay, but good for Thiel and Whitman.

Look, I’m just laying out some interesting leads here for journalists with budgets, leads that involve money and oligarchy in politics—someone out there with an expense account, for fuck’s sake, do your work! Sure, there may be nothing there—heck, it may have been Dr. Paul’s wife who suggested to Mrs. Romney what a wonderful idea it would be to base Paul’s SuperPAC in Salt Lake City. But if the media is willing to raise the question about the strange and rather unnerving alliance, it should be willing to look in strange places for unsettling answers.

One more thing: My labor isn’t free. If one of you actually gets off your ass and blows through Carlos Slim’s wallet to interview a few taxi drivers in Salt Lake, be warned: I will invoice you. Oh yes, I will.