Now I am as fond of gloom and doom scenarios as the next guy. But some analysts are presenting fairly straight up the center scenarios of things will get bad (as opposed to how bad things will get) that don’t comport with facts.

I like and have a lot of respect for the blog The Street Light. But in a current post, “Bad Loans, Banks, and the Coming Credit Crunch,” Kash compares the current problems with bank real estate loans to the S&L crisis of the late 1980s.

Now I will completely agree that the denouement of the credit problem that has started with subprimes will likely create a lot of collateral damage. But I see this operating more through a protracted housing recession that dampens down consumer spending, and through crises in other high-risk markets that make lenders tighten up on their terms, which will also restrict growth.

But Kash argues for a US based housing debt crisis: 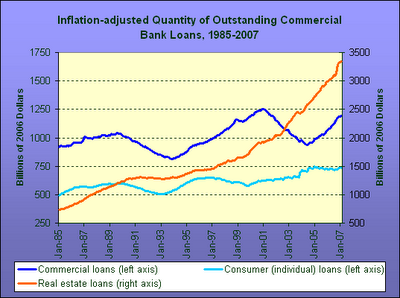 The two things that strike me about this picture are 1) the obvious cyclicality of lending, particularly to businesses (more about that later); and 2) the incredible growth of real-estate lending over the past several years. Note that all series have been deflated by the CPI, and thus reflect real changes. Even after adjusting for inflation, real estate lending has nearly doubled since the start of 2000.

Now consider that the Mortgage Bankers Association (MBA) recently estimated that about 5% of all mortgages are currently in default, and that the delinquency rate that is growing rapidly. Suppose that we use that statistic to infer that 5% of commercial banks’ real-estate loans will shortly have to be classified as non-performing. (Since commercial bank real-estate loans also include commercial real estate loans this estimate is a bit high, but since we know that the big growth in real-estate lending over the past several years has been for residential and not commercial property, the 5% figure at least makes a good starting point.)

Sounds reasonable but isn’t right. I don’t know what the split between commercial and residential real estate in the chart above is, and neither does Kash, but commercial real estate is on a very solid footing right now. Vacancy rates are at an all time low in many markets, rents are high, and corporate tenants have a lot of cash on their balance sheets. All this means that corporate/commercial tenants (which is where the bulk of the dough in commercial property is) are doing well collectively, so if one tenant were to default on his rent, it could be readily replaced. High rental streams from commercial properties means low default rates. So it’s plain wrong to assume commercial real estate is suffering the same sort of default rates as residential.

The second fact is that the default rate is based on number of mortgages, not dollar value. The subprime and alt-A mortgages, which is where the defaults are concentrated, are in lower price properties, hence lower mortgage amounts. So 5% in number translates into a lower percentage of dollar value. How much is beyond me.

Third is that many of these subprimes were packaged into CDOs. They buyers weren’t banks, for the most part. They were all sorts of investors looking for yield. Even JP Morgan (remember, Chase Bank) packaged subprimes into CDOs. So a lot of these defaulting mortgages aren’t even on bank balance sheets.

That would imply about $170 billion in bad loans, or about 3% of the $6.1 trillion in total outstanding loans (real-estate plus non-real estate loans) on the books of commercial banks. Not all of that $170 bn will be lost to banks, since they should be able to foreclose and sell some of the underlying properties, but it seems safe to guess that banks will end up writing off some fraction of that total – probably many tens of billions of dollars worth of loans, or several tenths of a percent of all bank loans.

He assumes the defaulting loans are a total loss. That doesn’t happen in residential real estate on any kind of scale. You see that only with crazy “build it and they will come” commercial developments.

Remember, when a residential mortgage defaults, the bank forecloses and takes the house and then sells it. Remember also, that even with the subprimes, only 29% were no equity. So for the 70% of the subprimes that have owner equity in the deal, the bank may get out whole, or with only a small loss. And for regular borrowers, there is more equity.

So let’s assume the full $170 billion he claims is bad loans lead to foreclosures (per above, they aren’t because he is assuming that all real estate loans are defaulting at a 5% rate, when it’s only residential, and even with a default, in some cases the borrower will renegotiate or make up the arrearage). Treat 80% of the assumed level of defaulting loans as subprimes. On those, the bank gets 60% recovery on the 30% that have no equity, 80% recovery on the remaining 70%. And on the remaining 20%, let’s assume they get 90% back. These are conservative estimates.

The damage? $38.7 billion, or 0.6% of total bank loans (and remember, loans are not the total of bank assets). And that’s assuming the losses were concentrated at banks, which per above, they aren’t.

It’s not healthy for the industry, and will probably cause a modest retrenchment. But it in and of itself isn’t a crisis.

Update: I did not see the Wall Street Journal story, “Subprime Troubles Bite Into Office-Space Sector,” until just now, which a casual reader could see as pointing to serious trouble. It says that areas where subprime lenders were big employers may have trouble with commercial real estate. True enough. But the story struggles to marshal any real data. It shows a chart that displays cities that lost the most jobs in the mortgage lending and consumer finance sectors. In the cities showing the biggest losses 4Q 2005 to 4Q 2006, the job reduction in those categories totalled a little over 14,000. And remember, there is no way of knowing how much of this is subprime-related. All kinds of activities relative to consolitation in the wake of a bank acquisition, such as closing branches and call centers, or combining back office activities, is doubtless a big part of this total.

14,000 jobs isn’t even material in an economy with total employment in excess of 140 million.