Those of you who have been following the income inequality debates (see here and here and here, for a sample) know that Thomas Piketty of École Normale Supérieure in Paris and Emmanuel Saez of the University of California at Berkeley, whose studies on income distribution are generally considered the most thorough in this field, are the source of the widely cited factoid that the income share of the top 1% (of tax filers) has increased from 8% in 1980 to 16% in 2004.

Of course, it’s inherently difficult to get good income data (people at all levels cheat, for example), so any finding can be quibbled with to a degree. However, even Fed Chairman Ben Bernanke has made clear in Congressional hearings that he takes increasing inequality to be a fact.

The IRS has released yesterday the preliminary stats for year 2005 which I have used to extend my [and Thomas Piketty’s] series [on the top income share by tax return unit] to 2005, posted at: http://elsa.berkeley.edu/~saez/TabFig2005prel.xls

2005 shows a very large increase in income concentration: the top 1% gains 14% in real terms from 2004 while the bottom 99% gains less than 1% (when including capital gains). The [previous] record peak of 2000 is surpassed even though 2005 is less of a high capital gains, high stock option year than 2000. By 2005, it looks like top incomes are showing strongly along all components: wages, business income, dividends, and capital gains.

The striking thing about 2003-2005 is the huge increase at the top with quasi-stagnation below the top 1%. In the late Clinton years, the top gained enormously but at least the bottom was also making progress (something you can see on Fig A2)… 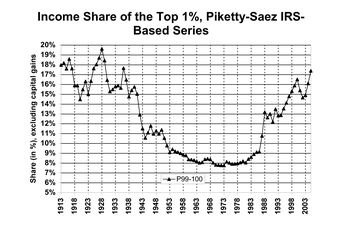