By happenstance, I came across a document, “Fixed Income Overview” from a May 29, 2007 Bear Stearns Investor Day presentation by Jeff Mayer, Co-Head of Global Fixed Income, and Tom Marano, Global Head of Mortgages and Asset Backed Securities on the Bear Stearns website. It’s a fascinating bit of reading and some parts are particularly choice: 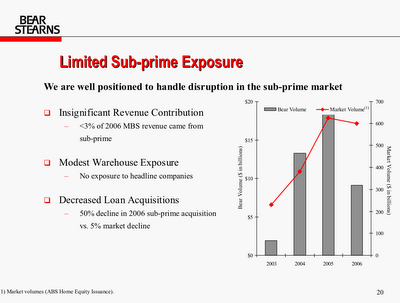 Now I am sure the powers that be will take great comfort in the disclaimer:

The information in this document is provided by Bear Stearns for informational purposes only, and should be considered current only as of the date of its initial publication…

Even so, given that this presentation was made one month after the February 27 selloff, which was also the timeframe in which conditions were deteriorating sharply in the subprime market (one illustration: lenders cut off New Century’s air supply on March 12).

Now, strictly speaking, since no one outside the immediate creditor group is certain what the troubled Bear Stearns hedge funds hold, it is quite possible that those funds also hold little in the way of subprime related paper. What the funds appear to own both residential and commercial mortgage related paper, and the larger fund (the “Enhanced Leverage Fund” whose fate is still unresolved) purportedly held junkier paper.

Junkier does not necessarily mean subprime. In fact, junkier is most likely junkier by virtue of deal structure, meaning the lowest credit quality tranches, which in polite circles are called equity tranches and are otherwise referred to as “nuclear” or “toxic” waste. The gimmick is they offer high yields, but the buyer runs the risk of getting little or none of his principal back.

But let’s flip the Bear argument around. This is the Bear fixed income department talking to investors. Investor presentations are a peculiar art form in which real financial data is recombined in such a way as to tell the most positive story possible. But given the upheaval of the preceding month, one would expect a slightly more candid discussion of risk.

The page above is the last page in the presentation, the only one that addressed risk in any way. The preceding 18 pages (#1 is the cover sheet) were all about growth. 11 were explicitly about growth; the remaining 7 discussed various infrastructure or capability additions (ie, the plumbing to support growth).

Cynically, in this sort of forum, Bear may have felt it needed to address only the headline items. But it may also signal institutional hubris. Until the hedge fund implosion, Bear was believed to have top-notch controls and models. Were they so confident of their prowess that it was beneath them to mention risk practices, even in a general fashion? Building controls is a critical part of growth.

Specifically, it is shocking that they saw the risk of the market upheaval only in terms of subprime exposure. The Financial Times has been carrying on for quite some time about the riskiness and likelihood of bad outcomes in the CDO sector. If journalists were writing about this possibility, it means at least some market participants were well aware of it. How could Bear have been so blind?

Another theme in this document is the primacy of the mortgage market to Bear’s strategy. There is no mention of Treasuries, corporates, agency paper, only the sexy products such as ABS, credit lending, distressed debt, credit derivatives, residential and commercial MBS, CDOs, CLOs. And although the phrase “hedge fund” never appears, one gets the impression that the product focus stems in at least in part from Bear’s desire to maintain its position with those customers (Bear as the #1 prime broker has nowhere to go but down).