One of Wall Street’s ongoing pin-the-liability-on-the-chump exercises is finding purchasers for the riskiest (often called “equity”) tranches of asset backed securities and CDOs, which in the trade are called “nuclear waste.” They come about because the attractive upper tranches get priority in the distribution of cash flow and may also be overcollateralized or credit enhanced. By definition, the equity tranche gets the dregs.

So who would be dumb enough to buy this stuff? Bloomberg tells us in “Banks Sell ‘Toxic Waste’ CDOs to Calpers, Texas Teachers Fund,” it’s pension funds, and makes clear that they aren’t suitable investors:

At a sales presentation of the bank’s CDOs to 50 public pension fund managers in a Las Vegas hotel ballroom, Jean Fleischhacker, Bear Stearns senior managing director, tells fund managers they can get a 20 percent annual return from the bottom level of a CDO. . . .

The California Public Employees’ Retirement System, the nation’s largest public pension fund, has invested $140 million in such unrated CDO portions, according to data Calpers provided in response to a public records request. Citigroup Inc., the largest U.S. bank, sold the tranches to Calpers.

“I have trouble understanding public pension funds’ delving into equity tranches, unless they know something the market doesn’t know,” says Edward Altman, director of the Fixed Income and Credit Markets program at New York University’s Salomon Center for the Study of Financial Institutions.

“That’s obviously a very risky play,” he says. “If there’s a meltdown, which I expect, it will hit those tranches first.”

Chriss Street, treasurer of Orange County, California, the fifth-most-populous county in the U.S., says no public fund should invest in equity tranches. He says fund managers are ignoring their fiduciary responsibilities by placing even 1 percent of pension assets into the riskiest portion of a CDO.

“It’s grossly inappropriate to take this level of risk,” he says. “Fund managers wanted the high yield, so Wall Street sold it to them. The beauty of Wall Street is they put lipstick on a pig.” . . .

“We got very interested in them just because a broker brought them to our attention,” Chippeaux, 50, says. She says the investment is worth the risk because the fund may be able to get higher returns than it can from bonds. The council has purchased equity tranches from Bear Stearns, Citigroup, Merrill Lynch and Morgan Stanley.

The council is relying on advice from bankers who are selling the CDOs, Chippeaux says. “We manage risk through who we invest with,” she says. “I don’t have a lot of control over individual pieces of the subprime.” . . .

Pension fund managers face the same hurdle as all CDO investors: The market has almost no transparency, with both current prices and contents of CDOs almost impossible to find, says Frank Partnoy, a former debt trader who’s now a law professor at the University of San Diego.

The murky nature of the CDO market presents danger for the unwary investor, and it’s particularly unsuitable for public pension money, Partnoy says.

“I think `smoke and mirrors’ in some sense understates the problem,” he says. “You can see through smoke. You can see something reflected in a mirror. But when you look at the CDO market, you really can’t see enough information to enable you to make a rational investment decision.”

That hasn’t stopped pension funds from taking high risks with the retirement plans of teachers, firefighters and police.

The funny thing about public pension funds is that they are even more herdlike than other investors. There are a few public pension funds that are considered to be innovative (Calpers is one; I’m not current, but the states of Washington and Colorado were once seen as leaders). If you sold one of them on a new product, you’d get access to others who presumed that they had done decent due diligence.

Since there are already some excellent posts on this story, I won’t reinvent the wheel. First, from Michael Panzner at Financial Armageddon:

One thing that has befuddled those who believe large quantities of toxic derivative waste have been excreted into the financial system in recent years is the question of who owns the stuff….

Whatever the case, most people would probably assume that it has not been the nation’s biggest pension funds, those heavily monitored fiduciaries with a cornucopia of resources at their disposal and instant access to the most knowledgeable contacts. Yet, they would be wrong….[E]ven those who should know better have been taken in by the high-yield siren song of new age Frankenstein finance.

And the reliable Tanta at Calculated Risk goes to town:

Your pension fund managers are buying “high yield” bonds that put you in first loss position on a bunch of junk bonds, and they are doing so on the risk-management “advice” of the people who are making a commission from selling those bonds.

Look, CDOs are complicated, and one of these days I’ll manage to do a long UberNerd post on them. Here’s the short version, with a nice picture (vandalized by Tanta) courtesy of Pershing Capital Management: 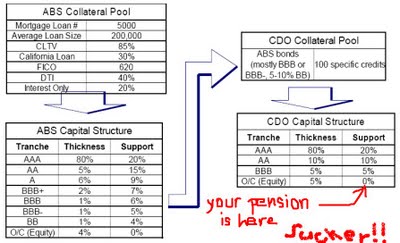 You take a bunch of subprime loans, and make a pool with them. Then you tranche that pool up and create a security (this chart calls it ABS or asset-backed security; it’s the same thing as MBS or REMIC for present purposes). Then you take those low-rated subordinate tranches and put them into a pool with a bunch of other stuff (commercial security tranches, corporate debt, junk bonds, heaven knows what), and then you tranche that up into a new thing called a Collateralized Debt Obligation, the “beauty” of which is that it’s an actively traded, not static pool, so that while you might know what’s in it the day you bought part of it, you may never know what’s in it after that. Then you take the lowest possible tranche of the CDO–the “equity” portion or the very first part to take any losses, which is so high-risk it is referred to as “toxic waste,” the stuff that is unrated by the rating agencies because it has no “credit support” whatsoever–and you put it in a pension plan managed by some goofball who thinks that it must be a good deal because a party who owns some of the higher rated tranches–the ones you “support” with your equity piece–tells you that if the planets align and the Messiah returns and everybody rolls a lucky seven, you’ll make 20%!