Barry Ritholtz gave some helpful tidbits about CDOs on his blog, The Big Picture. The source is the Bloomberg magazine (unfortunately only for those with terminals can subscribe).

“Worldwide sales of CDOs—which are packages of securities backed by bonds, mortgages and other loans—have soared since 2003, reaching $503 billion last year, a fivefold increase in four years. Bankers call the bottom sections of a CDO, the ones most vulnerable to losses from bad debt, the equity tranches. They also refer to them as toxic waste because as more borrowers default on loans, these investments would be the first to take losses. The investments could be wiped out. . .

Because CDO contents are secretive, fund managers can’t easily track the value of the components that go into these bundles. “You need to monitor the collateral in your investment and make sure you’re comfortable there will be no defaults,” says Satyajit Das, a former Citigroup banker who has written 10 books on debt analysis. Most investors can’t do that because it’s extremely difficult to track the contents of any CDO or its current value, he says. About half of all CDOs sold in the U.S. in 2006 were loaded with subprime mortgage debt, according to Moody’s and Morgan Stanley. Since CDO managers can change the contents of a CDO after it’s sold, investors may not know how much subprime risk they face, Das says.”

Ritholtz was also struck by their use of antic graphics. I was surprised to learn how little was owned by hedge funds (the press has made them seem like much bigger buyers than they have been) and how much has been bought by parties that really ought to know better, particularly fiduciaries like pension funds (recall Pimco chief Bill Gross’ warning that even investment grade CDOs are pretty trashy).

Note also that the “asset managers” listed as buyers in some cases are other CDOs: 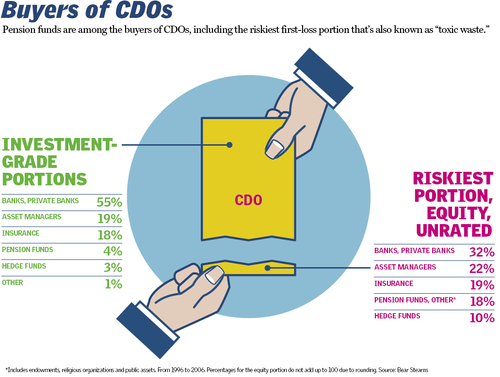 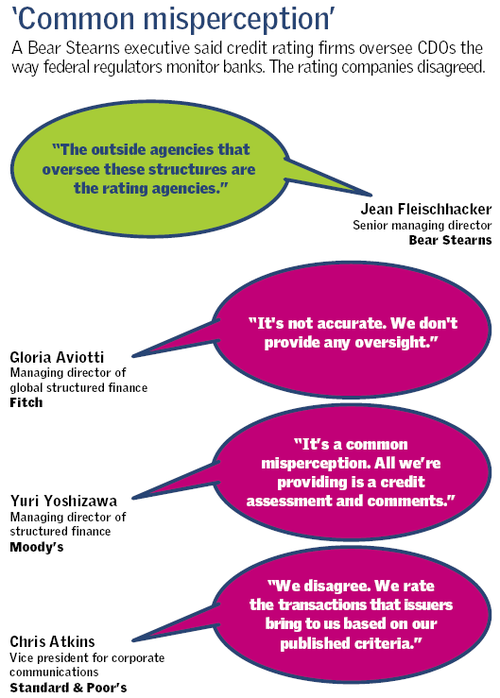