Yet another instance of the Administration fudging the data in an effort to change the record. After a proud history of climate change denial, the White House now claims that the US has been more successful than Europe in reducing greenhouse gases.

“The Political and Selective Use of Data: Cherry-Picking Climate Information in the White House,” a recently-released paper by The Pacific Institute, debunks this claim:

There are two fundamental flaws in the argument made by [climate change skeptic Christopher] Horner and subsequently by the White House. Both flaws are the result of egregious misuse of data. The first flaw is cherry picking the indicator: that is, carefully selecting the measure to be reported to prove a point – in this case, choosing to look at carbon dioxide emissions rather than all greenhouse gas emissions. The second flaw is the result of reference period hunting, or cherry picking the time period used. The data used by Horner and the White House appear to be carefully selected to support the appearance that the United States is doing more to reduce greenhouse gas emissions than Europe. The opposite is true when the proper time period is used.

While carbon dioxide represents the majority of greenhouse gas emissions, a variety of gases are responsible for climatic change. International agreements, including the UN Framework Convention on Climate Change, require emissions constraints on six different gases.7 By carefully choosing which gases to measure and which indicators to use to measure them, however, it is possible to claim false credit for progress in reducing greenhouse gas emissions…..

In addition to selectively choosing the indicator to evaluate, Horner and the White House both selectively chose a time period to make U.S. policy look good. Horner, who ironically has been a staunch and regular opponent of U.S. participation in the Kyoto Protocol, chooses 1997 (“Pick any year since the Kyoto Protocol was agreed to in 1997”), and 2000 (“In truth, Europe’s CO2 emissions are rising twice as fast as those of the U.S. since Kyoto, three times as fast since 2000”). The White House settled on 2000 as their base period….

When any year other than 2000 is selected as the base year, and when all greenhouse gases covered by the UN Framework Convention are included in the analysis, the claims of Horner and the White House that the U.S. is outperforming the EU turn out to be false….

A graph of total greenhouse gas emissions for the United States and Europe reveals how this manipulation of data was done (see Figure 1). Between 2000 and 2001, U.S. greenhouse gas emissions temporarily declined because of the modest economic slowdown and the dramatic drop in air traffic and travel following the September 11, 2001 terrorist attacks, not because of government policies to reduce emissions. 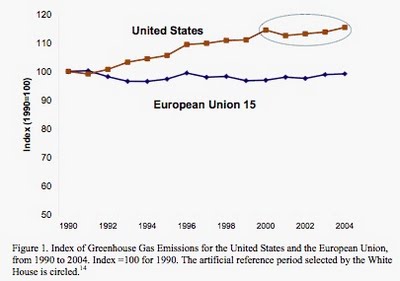 We found this story thanks to Slashdot.