The media is typically kind to newly-elected leaders, so now it’s Sarkozy who is getting favorable press treatment. And when we say “burnishing image,” we mean it literally.

The French magazine Paris Match touched up a photograph of President Nicolas Sarkozy on his US holiday, making his figure more svelte. 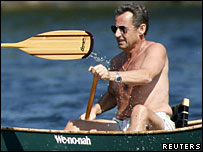 Leading news weekly L’Express printed before and after shots, showing a distinct tightening of the area it called poignees d’amour (love handles).

Paris Match said it had tried adjusting the lighting on the picture.

“The correction was exaggerated during the printing process,” the magazine told L’Express.