Like our own Fed governors in the run up to the FOMC meeting that produced a 50 basis point Fed funds rate cut, so too have European Central Bank been sending mixed signals on domestic versus international priorities in their interest rate policies. But their actions are the mirror image of ours. For them, member nations would prefer a rate rise to cool of inflationary pressures, while supporting international stability (aka not tanking the dollar) means lowering interest rates.

“The upside risks to inflation dominate any effects stemming from the appreciation of the euro,” said Garganas in an interview in Athens late yesterday. Inflation will probably accelerate later this year and the impact of the credit-market slump on economic growth will be “marginal,” he said.

ECB policy makers, who shelved a planned increase in borrowing costs on Sept. 6, have so far given no sign they will follow the U.S. Federal Reserve and cut their benchmark from the current six-year high of 4 percent. While the euro’s appreciation above $1.40 will cut import costs, Garganas says the economy is still strong enough to generate price pressures.

“The main drivers of inflation are domestic in nature,” said Garganas, citing excessive wage growth and high levels of capacity utilization. “By acting in a firm and timely manner, we will ensure that risks to price stability do not materialize.”

The ECB forecasts inflation to stay at its 2 percent ceiling this year and next. Consumer prices rose 1.7 percent in August from a year earlier….

Garganas’s view contrasts with those of Portuguese colleague Vitor Constancio, who said Sept. 21 that “the risks around the basic scenario have increased” and the ECB will “look into” the damping inflation effects of the stronger currency….

When asked whether his view on the economy is shared by colleagues on the governing council, Garganas said his position “is a realistic view, rather than an optimistic view.” The ECB’s “baseline scenario” is intact and the economy will expand “near potential” in 2008, he said.

Garganas, who also heads the Greek central bank, said he’s optimistic that the turmoil in financial markets won’t derail economic growth. Yields on 10-year government bonds have risen “much less” than three-month lending rates, he said, and it’s “difficult to envision the scenario” where market turmoil would lead to inflation slowing below 2 percent….

“Ultimately what matters for investments and spending on consumer durables are rates on longer term instruments,” said Garganas. “The main impact of financial market turbulence is to increase risk perceptions but it should not affect the main scenario.”

Economists expect the ECB to wait until April before raising its benchmark rate to 4.25 percent. Last month, they forecast such a move would come in October.

By contrast, ECB council member Christian Noyer is worried about the prospects for the dollar. From Forbes:

Asked about the ECB’s tolerance for a continued weaker dollar against the euro, Noyer noted previous statements by the Group of Seven that ‘excess volatility and disorderly movements (in exchange rates) are undesirable for economic growth.’

‘And everyone can understand what that means,’ he added. ‘Any abrupt changes in the dollar’s value could seriously hamper economic growth.’

He also stressed the importance of the US sticking to its strong dollar policy.

‘I regard it as extremely positive in this context that the US authorities are always sticking to and continue to stick to their strong dollar policy,’ he said.

Barry Ritholtz at Seeking Alpha tells us that Noyer is right to be concerned:
Today, we look at a few printing press Money Supply issues. Our focus: The spread between the Fed liquidity action (a/k/a Repos) and the M2 money supply measures. This is simply a measure of how much cash the Fed is injecting into the system.

The following Bloomberg chart shows the spread between these two monetary measures. It is quite instructive: 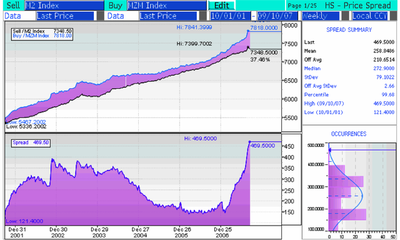 Speaking of surges: As you can clearly see above (bottom left chart), the amount of MZM (repos) versus M2 during 2007 is enormous. This means that the Fed is “inflating” at a rate faster today than it did right after 9/11, or during the deflationary scare of 2003.