As the housing numbers come in, they keep getting worse and worse. From Bloomberg:

Sales of new homes in the U.S. dropped more than forecast in August and prices plunged by the most since 1970, underscoring the Federal Reserve’s concern about the broader economy.

Purchases declined 8.3 percent to an annual pace of 795,000, the lowest level in more than seven years, the Commerce Department said today in Washington. The median price dropped 7.5 percent from a year ago.

The figures suggest home construction will extend its deepest slump since 1991, and consumers will have less home equity to tap for spending. Fannie Mae Chief Executive Officer Daniel Mudd said in an interview today that the industry won’t hit a bottom until the end of next year, echoing comments by KB Home, the builder that hours earlier reported a third-quarter loss.

However, performance across the country varied greatly. Sales actually increased in the Midwest and Northeast:

The number of homes for sale at the end of the month fell 1.5 percent to 529,000. The inventory of unsold homes jumped to 8.2 months at the current sales pace.

“We don’t think we hit a bottom until the end of ’08 and then we have some period of time to work our way back up again,” Mudd said in the interview in Washington. Fannie Mae is the largest provider of financing for American mortgages.

Housing starts have dropped to a level below even pessimistic forecasts. Keep in mind that the 795,000 figure presented above is an annualization of the latest month’s results, but consider that noted bear Nouriel Roubini had said the trough would occur in 2008 at 1.1 million new starts, and Roubini pointed out that some forecasters were looking for results below that level:

As recently reported housing starts have now fallen by 42% and now JP Morgan – one of the most respected research houses on Wall Street and a persistent proponent until recently of the view that the housing recession would bottom out – is predicting that housing starts will fall another 25% to a cumulative fall of 56% from peak and will bottom out at 999 thousand units some time in 2008.

Why the steep decay? There is a lot of housing out there….From an earlier post:

Michael Shedlock, of Mish’s Global Economic Trend Analysis, provides some uplifting charts and commentary that should quash any doubts that this housing cycle is worse than its predecessors:

….this housing cycle looks different than any I have seen. To this point, I have included two charts. I suggest studying them carefully. What you find is that the 1988–1992 housing cycle peaked in the first quarter of 1988 (1Q88) followed by a decline in “For Sale Inventories” until the cycle troughs in the 4Q ’91 (some 15 quarters later, which is typical). 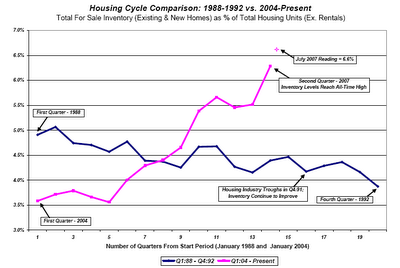 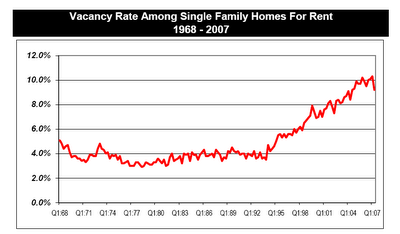 In case the charts are hard to read, the pink line in the top chart is our current housing inventory level, while the blue line is the 1988-1992 inventory line. Shedlock’s point is twofold: in the last cycle, inventory peaked in 1988, but the market prices continued to tank until inventory levels had fallen, which took almost four years. Second, look how dizzyingly much higher current inventory levels are relative to housing stock than they were last time around.

And his second chart shows that houses for sale have plenty of competition from a rental market that also has a lot of slack.