Some quick updates on what market prices reveal about investor expectations.

First, Bloomberg tells us that Treasury note prices are trading sufficiently far below Fed funds as to predict another rate cut before year end ;

Since the Fed last week lopped half a percentage point off the central bank’s target for overnight lending between banks — the first orchestrated decline in so-called federal funds since 2003 — traders have pushed the yield on Treasury two-year notes to almost three quarters of a point below the designated 4.75 percent funds rate. In the three previous occasions during the past 20 years when that has happened, policy makers have cut borrowing costs.

“The U.S. economy needs to grow at 2.5 to 3 percent or else it stalls,” said Bill Gross, manager of the $104.4 billion Total Return Fund, the world’s biggest bond fund. “Historically every time we get close to stall speed the Fed lowers short rates.”…

“The market is anticipating there could be some further rate cuts down the line,” said James Sarni, senior managing partner at Payden & Rygel in Los Angeles, which manages $54 billion. “There has been a shift in the balance of what’s driving the Fed from concern about inflation to more concern about growth.”….

Two-year yields declined more than benchmark 10-year yields during each period. Ten-year notes produced larger total returns because the longer a bond’s maturity the more its price rises for the same drop in yield….

Futures on the fed funds rate traded on the Chicago Board of Trade imply a 72 percent chance of a cut to 4.50 percent at the Fed’s next meeting on Oct. 31, and 55 percent odds of a reduction to 4.25 percent at the Dec. 11 gathering. The chances of a 4 percent rate by the end of January are about 22 percent.

Interest-rate futures have an accuracy rate of less than 30 percent since 1994 in forecasting the fed funds target, an August 2006 study by the Federal Reserve Bank of St. Louis found. As recently as July 25, futures put the odds of a target lower than 5.25 percent by November at less than 20 percent

The problem is that forecasters seem not to predict a slowdown until it is already underway, which suggest either an optimistic bias (after all, growth is a default prediction) and/or a tendency to discount data that suggests a slowdown until there is substantial confirmation. Thus, saying that a negative yield curve isn’t often a unique predictor does not diminish its value (assuming it is a valid predictor). In fact, conventional behavior says a negative yield curve would tend to be ignored at those times when it was a unique predictor.

Back to the other market forecast, namely, for housing prices. Index Universe, via Seeking Alpha, discussed the pricing of recently created futures contracts on S&P Case-Shiller Home Prices Indexes. Before, they were one year but maturities now extend out to five years.

Admittedly, because these contracts are new, it’s not clear how valid their forecasts are, but they at least sum up what certain traders think. And it isn’t pretty: 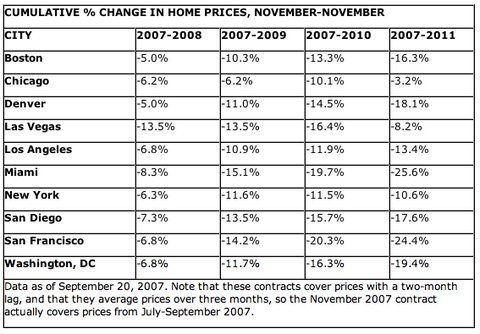