The headline above, from Russia Today (“the first 24/7 English-language news channel to present the Russian point of view”) sound like cold fusion to me, but the story is too skeletal to ascertain whether there might be some truth to it:

Russian scientists in the Khibinsky Mountains in the Arctic Circle have made an important scientific discovery. They’ve found a new mineral which absorbs radiation.

It does not yet have an official name and is known only as number 27-4. It can absorb radioactivity from liquid nuclear waste.

“It can extract radioactive substances from any water-based solution and so has a very important practical significance,” said Yakov Pakhomovsky, the head of the Kolsky Research Institute. 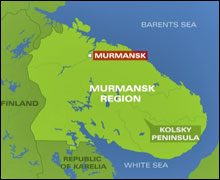 After coming into contact with the mineral, radioactive water becomes completely safe. Had this mineral been available to physicists after the Chernobyl or Three Mile Island disasters, the consequences might have been very different, as both accidents resulted in contamination from radioactive water.

However, it is not as simple as it sounds. Scientists say they need tonnes of it and so far they have only discovered a few grammes. But they are confident that they can chemically reproduce it on a much larger scale.

“We need to learn its properties and so that chemists can reproduce it on an unlimited scale,” said Grigory Ivanyuk, from the Kolsky Research Institute.

Every year ten new minerals are discovered in the Arctic Circle, and one third of all worldwide mineral discoveries are on the Kolsky Peninsula.

The latest find may prove to be extremely significant for the nuclear industry.