A reader reports that despite losing just over $2 billion in the third quarter on revenues of $9.6 billion and projecting fourth quarter results “not effectively better” , Freddie Mac nevertheless thought it fit to host a lavish celebration. As our reader described it:

To celebrate, they threw a decadent holiday party at the Ritz Carlton in exclusive McLean, VA. They had a laser printer that printed pictures on chocolate lollipops for the kids, hors d’oeuvres, entertainment. You’d think it was the Goldman Sachs partners dinner. Alas, it was a Government Sponsored Enterprise pissing away money right before they’re going to need a taxpayer bailout. 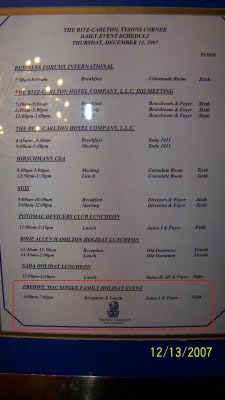