Two pieces today in the Financial Times address the striking disparity in sentiment and prevailing valuations between the credit and equity markets. Debt market investors are (for the most part) acting as if the floor might collapse beneath them, while equity investors are talking as if the downturn is coming to an end.

And interestingly, the writers come to different conclusions. John Authers believes the two markets will come to more consistent postures relatively soon; John Dizard thinks that the Fed’s (and the ECB’s if they join) rate cuts will bypass near-frozen fixed income markets and lead to another equity rally before the depth of the credit mess becomes undeniable.

First from the straightforward Authers:

If you believe the credit market, things have worsened sharply in the past few weeks. With spreads widening significantly, recession is a certainty in the US and Europe.

If you believe the equity market, there are grounds for optimism. Stocks are still above the low they hit in January, before the Federal Reserve made its emergency rate cut – betting that this huge monetary stimulus would ensure that any recession is shallow….in the past few weeks, as credit spreads have widened, the shares of those companies the credit market sees as most risky have rallied, and outperformed the rest of the market. Equity investors are making a bet that the credit market has got it wrong.

The credit market may be at levels that cannot be justified by the fundamental outlook for defaults: its investors have difficulty raising liquidity; many need to clean their balance sheets; there are unprecedented worries over various structured credit products, many of which did not exist during the last downturn in the credit cycle; and the problems of the monoline bond insurers create further uncertainty.

Alternatively, the stocks rally may have been driven by “short covering” as traders stopped betting that stocks would go down. Or the equity market is in denial about the acute problems in the credit market.

Whatever the explanation, the disconnection is unlikely to persist for long.

And now to the colorful John Dizard, who presents scenarios illustrating the warning from Keynes: “The market can stay irrational longer than you can stay solvent.” Dizard thus sees a continuation of the credit/equity disparity longer than most expect as a likely outcome. He also points out that the regulatory regimes that assume that markets always provide prices, and those prices are always a good way to value assets, are making the problem worse:

If hedge and proprietary fund managers were to continue to follow the strategies and risk management disciplines they laid out in all those PowerPoint presentations, they’d be heading for what pilots call a “ground loop” and a smoking hole.

The really smart money, after all, “knows” that what you look for in discontinuous or troubled times is free money in the form of arbitrages. No need to take real risk; you just look for absurdly oversold and therefore undervalued assets and buy them. Simultaneously, you short-sell the still wildly overvalued assets that were, historically, correlated with those long positions. Locked in profit, without risk.

Not gambling, not at all. End of presentation. Thank you on behalf of Relative Value Fund Management Co, LLC, Park Avenue and St James’s. In the past couple of months, though, that risk-managed world is looking more like Baghdad on a bad day. The problem is that even if you, the manager or investor, are “right”, eventually, about what’s over- and under-valued, you will be unable to maintain your positions. There is so much volatility, because the banks and dealers are unwilling or unable to commit the capital to maintain markets, that your short and long positions are very likely to be forcibly sold off in a series of whipsaws. The prime brokers, who were so friendly when they were “introducing” you to those funds of funds, have now changed from salesmen to margin clerks, and then from margin clerks to automated selling programmes. The liquidation of funds such as yours only shrinks the market-making capital yet further.

At the moment, the most striking “arbitrage” is between the valuation of risk in the credit markets and the equity markets. Credit markets are discounting the end of the world, while equity strategists whose e-mails I spend half the morning deleting are saying that we are forming a tradeable bottom, which sounds faintly obscene.

Let’s say you decided at the beginning of the year, with what was left of your limited partners’ capital, to bet that the price of risk in both markets will converge. So, you go short a basket of stocks of investment grade companies, and simultaneously buy the CDX.IG, the index of investment grade credits. However, since, historically, stocks in the form of the S&P 500 are seven times as volatile as the CDX.IG, you levered up the CDX at the multiple required to have a hedged position. Unfortunately for you, in the first week of February, the CDX moved (down) one fourth, not one seventh, as much as equity, as dealers stopped providing liquidity. So your position just died and went to money heaven. You may find out months later that you were right, and can harangue someone at the next barstool with an illustration on a napkin. But you’ll still be broke and out of a job.

And it could well take longer before you can even win that argument at the bar. I assume that the central banks will continue to chase the market’s expectations down the interest rate forward curves. Even so, the credit markets are now so broken that you could well have a huge equity rally – actually I expect one starting sometime between the end of the first quarter and the end of the second quarter – with not much of a price or liquidity recovery for a lot of credit product. It’ll just sit there, a pile of trapped value that can only be released by a new generation. Ask the people who bet on the restructuring of Japan Inc. I know, their number was disconnected.

For all this, you can thank the Basel 2 orthodoxy. This was the bank regulatory philosophy based on the notion that markets are liquid, continuous, and efficient. Price is the same thing as value, and there will always be a price for an asset on a bank or dealer’s balance sheet. Big institutions should be trusted to apply complex valuation models, because they can afford to hire the consultancies that devise them. Regulators who believe in these models, and who may move back and forth to the consultancies, are the ones who should be appointed to high office.

Right now, there is a sotto voce argument in the policy world over the social utility of marking assets to market when, really, there is no market. The effect of mark to market, embodied in America in the form of FAS 157, the accounting standard, is to decapitalise the system more rapidly than new capital can be raised.

In the US, Congress is scared of FAS 157’s effects, but even more scared of the reaction if they modify it by law. The Fed has its doubts about mark to market, but wants to see what the econometric models say. The Securities and Exchange Commission, which actually controls mark to market policy, doesn’t plan to change anything, because that would be an admission of error. The accountants are enjoying their moment of power over their employers. The valuation software sellers are not about to say there’s a problem with the whole concept. Similar social dynamics have gridlocked the financial policy people all over the world. So for now, forget about trading relative value.

A chart from The Big Picture provides some support for Dizard’s view that another equity rally is in the offing: 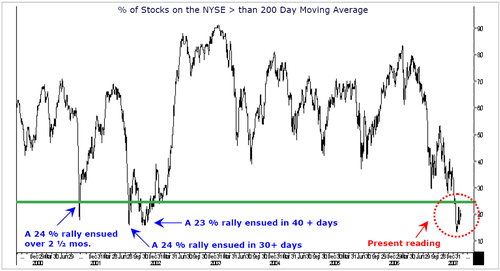 The present reading on the % of NYSE stocks above their 200 Day Moving Average indicator is at readings that — at least in the early part of the market cycle — have led to strong rallies in the short run. The first 3 readings (far left of chart) were deeply oversold conditions caused by a) the initial collapse from March 2,000; b) The 9/11 sell off; and c) the sell off following that 9/11 selloff/bounce.

So far, this reading has produced a peak rally reading of 9.6% at its recent high price. This is a far cry from the past bounces.