Eliot Spitzer, governor of New York, played a critical behind-the-scenes role in the rescue of Ambac, frequently calling senior bankers to press for a deal to be made during the six-week race by the bond insurer to avoid a cut to its triple-A credit ratings….

According to people involved in the deal, which resulted in a $1.5bn equity raising by Ambac late last week – a third of which is still owned by at least seven banks – Mr Spitzer was in daily telephone contact with Eric Dinallo, New York’s insurance superintendent, and the department’s advisers, Wall Street firm Perella Weinberg.

Mr Spitzer also made numerous calls to senior bankers at the top banks involved, including Citigroup, UBS, Bank of America and Credit Suisse…..

“There was a clear need at times for cementing of relationships, among the banks, the company and ratings agencies,” Mr Dinallo said. “The governor was very involved.”….

The banks’support of Ambac and the company’s successful new equity issue follow six weeks of intense negotiations about its future. A group of at least 12 banks had originally agreed to inject $3bn of fresh funds into Ambac, which would then split into municipal and structured finance businesses. However, rating agency’s unwillingness to assign ratings to the structure stymied the deal.

When the ratings agencies specified how much fresh equity Ambac would need – $2bn – the plans were changed in an effort to quickly get this done. The $1.5bn equity issue, combined with a freeing up of $600m of capital which will result from Ambac’s plans to stop its structured business, is enough to satisfy ratings agencies, for now.

One might say the proof is in the pudding. None of the banks stepped forward to make an equity infusion; they wouldn’t even back-stop Ambac’s equity offering, which was initially rumored to be $2.5 billion, but wound being only $1.5 billion. They wouldn’t even put up $500 million for a line of credit that was also claimed to be part of the deal. So I’d be hesitant to say that Sptizer’s involvement had a positive impact.

The FT article is remarkably unclear on one point, however. It says that seven banks still own one-third of the Ambac offering. In context, one would assume that they were a subset of the twelve banks that were tapped to provide an equity infusion. However, the article also stated that the banks “are hoping that they will eventually be able to sell the $500m of shares they own.” It’s possible that these banks are instead the co-managers or underwriters, although it would be unusual for underwriters to price a deal so badly that they’d be left holding that much. But it is also peculiar if seven or more banks involved in the bailout discussions were willing to buy stock, but not have that disclosed ex ante. Then the deal could have been presented as a $1.5 billion deal, with the banks taking $500 million at same price as the public shareholders. Why wasn’t that done? Even a weak vote of confidence is better than a vote of no confidence, which is what the banks’ stance appeared to be.

So assuming these banks indeed hold stock they’d like to unload, the Friday tape painting makes a bit more sense. As we noted on Saturday:

Investors placed trades in the minute before the close to goose the stock price reported for the day (Thornberg did so as well):

Shares in Ambac and the mortgage lender Thornburg Mortgage surged Friday after investors traded blocks of at least 10 million shares in the week’s final minute, according to Bloomberg data.

The transactions multiplied Ambac’s 4-cent gain for the day into a $2.08 increase, closing at $9.50, and turned a 24 percent drop for Thornburg into an 8.5 percent rally. The stocks rose on orders submitted by investors instructing brokerage firms to trade at least 10 million shares as near to the end of the day as possible, according to exchange data compiled by Bloomberg.

While there did not appear to be any news to send Ambac higher, “people think something’s going on because the print went up so high,” said Joseph Saluzzi, the co-head of equity trading at Themis Trading in Chatham, N.J. “It doesn’t look like it’s a keypunch error since it was such a large block.”

I’m no spring chicken, or wet-behind-the-ears newbie. That was the most blatant example of a painted tape I have ever witnessed. 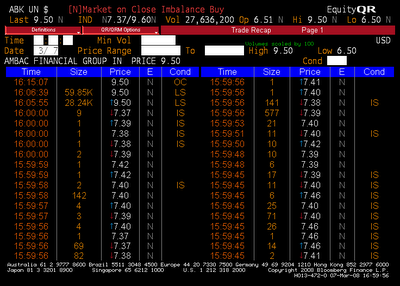 The most convincing theory I’ve heard is that Ambac is trying to make life so unpleasant for the shorts that they’ll give up.

But maybe there is another way to view this. Manipulating the stock price won’t work long term, but if shorts cover, that will elevate the price. And notice that there was selling after-hours, but the price stayed above the price before the last-minute rally.

Could it be that some of the banks that are trying to unload took advantage of this window? I’d be very curious to know what the volume of those after-market trades was.