Investors are so nervous that they are willing to take almost nothing in nominal terms, which is tantamount to a meaningful negative real return, to sit in the safety of three-month T-bills, which are now a mere 0.56%.

One explanation is the large number of fails in the repo market, which as Alea reports, is “massive”:

This is recent data to march 5th on settlement fails between primary dealers. Settlement fails are reported on a cumulative basis for each week, including nontrading days.

Not only is this the lowest level the rate has achieved since 1958, but as reader James Bianco of Bianco Research tells us, it puts US short rates below Japan’s for the first time since 1993 (click to enlarge): 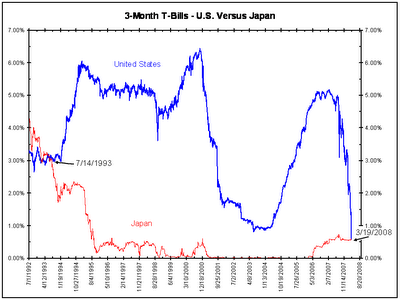 An article in the Wall Street Journal today with the rather misleading title, “Fed Fix Works For Now,” says that the Fed is achieving some success in lowering mortgage bond yields. But the plunge in short rates and the rise in TED spreads says that much of the rest of the market is running for cover.

“There’s a whole flight-to-quality trade,” said Joe Tully, managing director of the money-market desk in Newark, New Jersey, at Prudential Investment Management, who’s betting $1 against a colleague that bill rates won’t fall below zero. “The markets are totally skittish. They just want to be in bills.”….

“It’s a capital preservation trade,” said Michael Cloherty, an interest-rate strategist at Banc of America Securities LLC in New York. “The rationale is, `I’ll buy a bill, I know that when the thing matures I’ll get 100 cents on the dollar.”’

The three-month London interbank offered rate, or Libor, for dollars rose for the first time in three weeks, indicating the Fed is struggling to instill confidence in money markets. The difference between what the government and companies pay for three-months loans, known as the TED spread, increased 32 basis points to 1.98 percentage points, the biggest gain since Jan. 22, when the Fed made an emergency cut in borrowing costs.

A high TED spread says banks are reluctant to lend to each other, which is not good. An earlier Fed measure, the Term Auction Facility, was designed to address high TED spreads. That appears no longer to be working.