Although we don’t always agree with his views, we are fans of Thomas Palley posts because he is willing to question economic orthodoxy. We were particularly taken with his piece, “Demythologizing Central Bankers and the Great Moderation.”

In his latest offering, Palley disputes the idea that the recent runup in oil prices is entirely the result of fundamental forces. In taking, this position, he runs into plenty of high profile opposition, particularly Paul Krugman (“Speculative nonsense, once again” is one of many on this front) and Martin Wolf who in today’s comment declares,

No less important, however, is abandonment of the silly idea that price jumps in oil or food are the result of wicked “speculation” – a fantasy promoted by dangerous populists across the globe.

Well, it isn’t just populists who question that supply and demand gives a full explanation. Consider this paragraph from a report by Morgan Stanley:

Economists tend to be less well-versed in supply conditions in the energy sector. But the current oil price increases are curious. They are not quite supply driven, and the fact that global demand is decelerating appears to be inconsistent with accelerating oil prices. While the logic behind the increasing structural energy demand from EM makes a lot of sense, it is still difficult to justify how oil prices could more than double in 15 months, or rise by six-fold in seven years.

There have been other anomalies which indicate all is not well in Denmark. An oil-market participant. mxq, left this comment earlier this month:

Refiner crack spreads have suffered (and actually went negative a few weeks back) b/c there has not been a concomitant increase in distillate prices.

That is, the total refined products have been selling for less than the price of raw oil…that’s why refiners are at sub-90% capacity (and bottomed in the low 80%’s…aka Katrina/Rita levels).

In either case, this is the point where traders would short oil and buy distillates, arbing away the spread…but, as we saw last week, the shorts keep getting leveled, so that trade doesn’t work…

“The fact that refiners are willing to pay a higher price for physical supplies than the futures benchmark lends weight to the argument that speculators are not the cause of record oil prices.”

If anything, that makes me think speculation is even more of a problem given that the primary consumers in futures markets can’t rely on these markets to lock in the contracted future/spot prices.

Why can’t refineries lock in delivery at futures prices like they always have? That sounds dangerously similar to what is happening w/ grain markets where farmers are dropping out due to lack of reliability in spot/future convergence.

This is not definitive, but the fact that refiners are getting squeezed is not consistent with the notion that crude prices are driven by end market demand.

Similarly, Krugman has made much of the argument that if oil prices were too high in relationship to supply and demand, you’d see inventory buildup. But that is in a simple economic model with idealized supply and demand curves, not in an oil market with two places to store inventory, namely, above ground or below ground. As we have stressed, above ground storage is limited and costly. From Dan Dicker at TheStreet.com($):

…in the world of energy trade, there is lack of fungibility that has always broken down thus: Electricity, non-storable — Natural gas, more storable — Crude oil, mostly storable

Although easiest of the three, oil storage has been historically inelastic, no matter the price… Over the last 4 years (and for most of my trading life) forward stocks have always hovered between 50 and 55 days — storage is expensive and limited, and just not efficacious.

This is why, at least in my view, that supply arguments are often overblown in oil pricing theory — supplies remain closely aligned to demand and rarely overrun — as OPEC members have time and again explained but are ignored. This is why President Bush can walk in to a meeting with Saudi ministers and be patted on the head like a silly schoolboy — “you don’t understand, Mr. President — we’ve got nowhere to SELL any more right now” and Bush will run home and talk about increasing domestic supply as if he hasn’t heard a thing

In Congressional testimony last fall, oil industry expert Phillip Verlegger explained that the role of inventories in the oil industry is misconstrued, particularly in a world with stores of value other than oil stocks:

Inventories are the most misunderstood economic phenomenon in the energy business.

Time and again, one reads statements by energy policy officials commenting on low stocks. Invariably, these officials call on OPEC to boost output so stocks will rise. The economic ignorance displayed in these appeals is appalling.

My favorite quote appeared in November. While attending the World Energy Congress, U.S. Energy Secretary Bodman called on OPEC to boost oil production. As the November 13 Financial Times reported, “Samuel Bodman, the U.S. energy secretary, urged
at such high levels in part because developed countries’ stocks were below their five-year averages.” The story then continued:

But Mr. Bodman told reporters at the World Energy Congress in Rome: “I have asked that that be reconsidered. I have asked them to increase production.” He said he was trying to draw OPEC’s attention to the factthat the inventory numbers were “troubling.”

Bodman’s statement makes it sound as if commercial inventories will increase if OPEC boosts production. But doesn’t something else have to happen for this to occur? Don’t companies have to agree to buy the oil? Suppose, given the current financial crisis, that companies choose not to buy the oil? What happens then?

The data demonstrate that companies accumulate incremental stocks oil only if it is profitable to do so. Since May, it has not been profitable. Since May, companies have been dumping stocks. This story is told with two charts.

Figure 8 shows data on “returns to storage” for crude in 2006 and 2007. Returns to storage will be a new concept here because, to my knowledge, neither the Energy Information Administration nor any other organization follows the idea. However, the concept goes back to John Maynard Keynes, who, whatever his other vices, was one of the world’s great commodity traders. Returns to storage measure the financial return earned by purchasing a physical unit of a commodity, selling a future for delivery at a later date, and storing the commodity. If, for example, one buys crude for $50 per barrel and sells a future for delivery a year hence at $100 per barrel, one earns a return of 100 percent. The trade, referred to as cash and carry, can be very profitable. Rumor has it that Keynes once filled the basements of several colleges with wheat when the returns were really high. 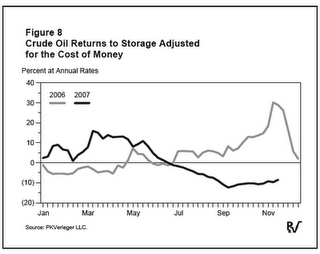 The data on inventory accumulation and liquidation confirm this hypothesis. Figure 9 shows that stocks tend to rise with positive returns and decline when returns are negative. Figure 9 shows the deviations of U.S. inventories from trend from 1990 to 2007. (Note: during this period, we have observed a steady decline in the “normal” level of inventories held by commercial firms. This decrease is explained by improved operating efficiencies in the sector.) 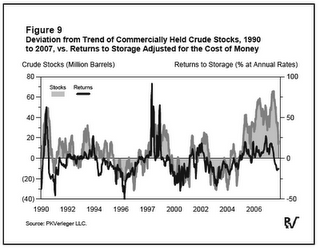 As can be seen from Figure 9, stocks decline when returns fall below zero while tending to rise when returns are positive. The explanation for this effect is quite simple. Financial officers of firms holding oil stocks have a wide number of options. They can invest their cash in commercial paper, Treasury bills, or inventories. They can even borrow to acquire additional stocks. Their decisions are driven by the returns offered by various instruments.

This finding, while intuitively obvious, seems to have escaped many who follow the oil market. Recently, though, the financial market’s effect on oil and the rest of the economy has become painfully apparent. In particular, the subprime crisis has caused many lenders to withdraw from the commercial paper market. In turn, the cost of borrowing has increased, raising the cost of holding oil stocks. At the same time, buyers who had lifted forward prices to a premium over cash prices have liquidated positions, in part to obtain cash. This has made it expensive to hold inventories and so stocks have dropped.

Thus oil inventories cannot be viewed as an indicator of whether market prices are too high or low; their level is a function of multiple factors.

Over the past eighteen months, oil prices have more than doubled, inflicting huge costs on the global economy. Strong global demand, owing to emerging economies like China, has undoubtedly fueled some of the price increase. But the scale of the price spike exceeds normal demand and supply factors, pointing to the role of speculation – and underscoring the need for policy action to clean up the oil market.

Reflecting their faith in markets, most economists dismiss the idea that speculation is responsible for the price rise. If speculation were really the cause, they argue, there should be an increase in oil inventories, because higher prices would reduce consumption, forcing speculators to accumulate oil. The fact that inventories have not risen supposedly exonerates oil speculators.

But the picture is far more complicated, because oil demand is extremely price insensitive. In the short run, it is technically difficult to adjust consumption. For instance, the fuel efficiency of every automobile and truck is fixed, and most travel is non-discretionary. Though higher airline ticket prices may reduce purchases, airlines reduce oil consumption only when they cancel flights.

This illustrates a fundamental point: in the short run, reduced economic activity is the principle way of lowering oil demand. Thus, absent a recession, demand has remained largely unchanged over the past year.

Moreover, it is relatively easy to postpone lowering oil consumption. Consumers can reduce spending on other discretionary items and use the savings to pay higher gasoline prices. Credit can also temporarily fill consumer budget gaps. Although the housing boom in the United States – which helped in this regard – ended in 2006, consumer debt continues to grow, and America’s Federal Reserve has been doing everything it can to encourage this. Consequently, for the time being the US economy has been able to pay the oil tax imposed by speculators.

Unfortunately, proving that speculation is responsible for rising prices is difficult, because speculation tends to occur during booms, so that price increases easily masquerade as a reflection of economic fundamentals. But, contrary to economists’ claims, oil inventories do reveal a footprint of speculation. Inventories are actually at historically normal levels and 10% higher than five years ago. Furthermore, with oil prices up so much, inventories should have fallen, owing to strong incentives to reduce holdings. Meanwhile, The Wall Street Journal has reported that financial firms are increasingly involved in leasing oil storage capacity.

The root problem is that financial markets can now mobilize tens of billions of dollars for speculative purposes. This has enabled traders collectively to hit upon a strategy of buying oil and quickly re-selling it when end users accommodate higher prices – a situation that has been aggravated by the Bush administration, which has persistently added oil supplies to the US strategic reserve, further inflating demand and providing additional storage capacity.

Absent a change in trader beliefs, the current oil price spike will be broken only by a recession that exhausts consumers’ capacity to buffer higher prices, or when the slow process of substitution away from oil kicks in. Thus, economic fundamentals will eventually trump speculation, but in the meantime society will have paid a high price.

Whereas oil speculators have gained, both the US and global economies have suffered and been pushed closer to recession. In the case of the US, heavy dependence on imported oil has worsened the trade deficit and further weakened the dollar.

This sobering picture calls for new licensing regulations limiting oil-market participation, limits on permissible trading positions, and high margin requirements where feasible. Sadly, given the conventional economic wisdom, implementing such measures will be an uphill struggle.