Big state budget shortfalls are an inevitable side effect of a weak economy. The Wall Street Journal reports that the decline is projected to leave states with an aggregate deficit three times the level last year, and suggest that the economy may be weaker than the GDP stats suggest.

FYI, I was just on a panel at the Inman Real Estate Conference in San Francisco with (among others) John Williams of ShadowStats, CR of Calculated Risk, and Noah Rosenblatt of UrbanDiggs. Williams claims that were government figures prepared on the same basis as they were in 1970, we’d already be in the worst recession since the Great Depression. I’m not sure I’d go that far, but I am willing to accept the notion that we are in a recession, as opposed to skirting on the brink of one.

The stumbling U.S. economy is forcing states to slash spending and cut jobs in order to close a projected $40 billion shortfall in the current fiscal year.

That gap — identified Wednesday in a survey by the National Conference of State Legislatures — is more than triple the size of the previous year’s. It is the result of broad economic weakness at the state and local levels that could cause pain throughout this year and into 2010. Sales-tax collections, for example, have been hurt by the housing slump and high gasoline prices, which are prompting cutbacks in consumer spending. Personal income-tax collections have been hit by rising unemployment, while corporate income-tax collections have been eroded by falling profits….

A separate survey of economic conditions by the Federal Reserve’s 12 regional banks — the “beige book” — said economic activity was sluggish across most of the U.S…. 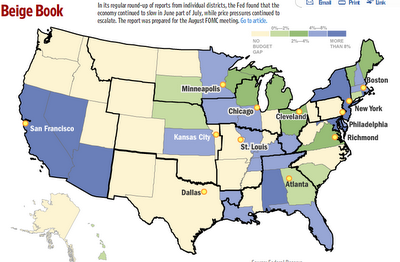 Unlike the federal government, most states are required to balance their budgets. Most have so far resisted tax increases, instead opting for raising prices on things like tolls and college tuition, and cutting back on services like education and health care. Some chose one-time measures such as tapping rainy-day funds that were built up in flusher times. That could lead to future cutbacks if the economy doesn’t bounce back in coming months.

The spreading economic weakness also is affecting localities, which are being ravaged by falling property-tax collections and a decline in state aid. In Minnesota, the city of Duluth plans to stop operating its Fun Wagon — a free trailer stuffed with games and cookout supplies for a neighborhood party. Other services, including a city pool and a fire hall, also are being eliminated….

The housing slump, now well into its second year, is the primary culprit. The decline in home sales has cut into real-estate transfer taxes. Construction spending and employment has declined. Fewer home sales have resulted in lower sales of home furnishings and washing machines, eating into sales taxes.

Of course, for many states, today’s budget woes stem at least partly from expanding their services during the good times and not planning enough for the inevitable downturn.

Meantime, states are dealing with shortfalls of many kinds. According to the report by the association of state legislatures, 22 states are reporting sales taxes that are below forecast. In nine of those states, the collections were below forecasts that had already been reduced downward. Seventeen states had a shortfall in corporate income tax, 11 states were behind on personal-income taxes, and 11 were also behind on miscellaneous taxes such as insurance-premium taxes.