Oil prices continue their seemingly relentless march upwards, breaching the $143 a barrel level Tuesday. Even the headlines are selling the bull’s case. Note that a Bloomberg’s story was titled, “Crude Oil Rises a Second Day as IEA Predicts `Tight’ Supplies Through 2013.” Yet what did the text say?

The IEA said in a report that spare OPEC capacity will shrink by 2013, keeping the market “tight.” The growth in global excess supply will peak at about 2.5 million barrels a day in 2010, dropping to less than a million a day for the next three years, the agency said.

Note the IEA sees the supply/demand situation improving through 2010, then tightening as the emerging market demand picks up in a strengthening global economy. Yet oil, unlike copper or gold, is not an easily stored commodity. Thus, there isn’t a reason to expect market participants to bid it up now in anticipation of conditions in 2012. Indeed, even if storage were not problematic, given the cost of money and the improving supply/demand conditions near-term, were hoarding practical, you’d expect to see it later, and thus reflected in spot prices a year or two hence (note we have discussed before that oil is actually not a very storable commodity).

Admittedly, I haven’t seen the entire report (it’s $500, sports fans), but the forecasts for 2010 and beyond seem unduly precise given the uncertainty of production out of Iraq. Iraq is underdeveloped, and claims to have new proven reserves based on recent surveys which would give bigger reserves than Saudi Arabia. Admittedly, even if these assertions prove out, there is still a good deal of uncertainly as to when supply would come on line. But this would appear to be a wild card that is not acknowledged in the IEA estimates.

Prices should in theory reflect near-term conditions, longer-dated futures should reflect intermediate-term ones. But the news reports picked up on the gloomy tone of the IEA report (and we must note that the IEA has consistently hewn to conventional wisdom, having given cheery assurances about the future prospects for oil supplies until prices started to run up) and that in turn was incorporated in prices.

Note that this forecast contradicts the predictions of the market’s darling analyst, Goldman, which predicts after a “super spike” this year to perhaps $200 a barrel, oil will fall to $75 a barrel in 2012 normalized.

Why are we taking such a skeptical posture? Because there isn’t enough skepticism around. We accept that oil is a finite resource and that all things considered, higher prices are a good thing because the will encourage conservation, a transition to other energy sources, and serves as a de facto carbon tax. But a 50% price increase in five months is not solely due to supply and demand factors. This is a two sigma move in the absence of war or other sufficient explanation.

In fact, this may simply be animal spirits, aka bull market psychology. Per the IEA report, the press and even analysts are validating the prevailing perceptions. This tendency is turn is supporting selective readings of the facts (it’s a well demonstrated cognitive bias that when an even-handed documentary is shown to people who have pro and con views on the material under discussion, each side will focus on the information that favors its views and discount the rest of the presentation).

Let’s turn to some sightings du jour. On the one side, we have Goldman via Reuters in “Tight credit driving shorts out of oil market“:

Open interest in New York Mercantile Exchange light sweet crude oil futures CLc1 has been declining since the third quarter of 2007, a phenomenon Goldman says is likely due to the credit squeeze that began to grip global markets at that time.

“The short side of the market has a greater need to cover in response to deleveraging and decreasing credit terms,” wrote a Goldman team led by Giovanni Serio and Jeffery Currie.

Open interest in the NYMEX light sweet crude contract fell to a 15-month low last week at 1.3 million contracts, according to Reuters EcoWin.

The credit crunch may be further skewing the oil market toward the upside by preventing some cash-strapped long players from liquidating positions as many are likely using substantial gains in oil as collateral for other investments, Goldman said.

Note this discussion does not reflect supply and demand conditions. Note also open interest could well have moved to the ICE or OTC in the light of regulatory scrutiny in the US.

Now from Marc Faber via Bloomberg (and note Faber was bullish on commodities as recently as a few months ago):

Demand for industrial commodities including oil will fall, pressuring prices, because the financial sector is in “disarray” and the U.S. economy will continue to slump, investor Marc Faber said.

“The industrial-commodity complex is vulnerable because demand will slow down,” said Faber, publisher of investment newsletter the Gloom, Boom and Doom Report. “The economy is weakening, corporate profits will disappoint, valuations are not particularly attractive, and the financial sector that serves to channel savings into investment is in disarray.”

Demand for commodities will fall after raw materials including oil, corn, copper and gold touched record highs in the first half, Faber said in an interview on Bloomberg Television. The global economic slowdown will last a “very long time,” he said.

“The financial crisis has been the appetizer,” Faber said, referring to the $400 billion in writedowns at the world’s largest banks and securities firms in the past year. “We still need the main dish.”…

The U.S. economy went into recession last October and current statistics are hiding the “severity” of the recession, Faber said. Economists have also understated the rate of inflation as higher food and energy costs impact consumers, he said.

Commodities will face a “correction” after a seven-year rally and prices will decline in the next six months to one year, Faber said on June 26. Faber told investors to abandon U.S. stocks a week before 1987’s so-called Black Monday crash.

Faber did caution that all bets on oil are off if Iran is attacked.

Keep in mind that these views are not necessarily incompatible. We could still see further price appreciation before the recognition of demand destruction takes hold.

But wait a second. We have evidence of demand destruction now. We’ve already mentioned, as have others, the fall in miles driven in the US, a 20% drop in petrol sales in the UK, and 14% on the Continent.

“[U.S.] demand for oil over the first five months of the year was off 2.5%* from last year.” —American Petroleum Institute, June 18, 2008, Associated Press Online (*Translation: We are using approximately 525,000 fewer barrels of oil per day.)

“Iran has 15 [oil] supertankers idling in the Persian Gulf capable of storing more than 30 million barrels of crude.” —Bloomberg, June 16, 2008

“Thunder Horse started pumping from a single well on Saturday…and on schedule to have the field online by yearend. Thunder Horse alone will increase overall U.S. oil and gas production by 3.6%. Add British Petroleum’s Atlantis platform that started up last year, and the boost grows to 6.4%.” —Houston Chronicle, June 16, 2008

“Refiners across Asia said on Monday they were not likely to buy more Saudi crude at current prices, highlighting the kingdom’s challenge in attempting to contain soaring markets by promising extra barrels. The world’s top exporter is set to increase output to 9.7 million barrels per day in July. The extra 200,000 bpd, if confirmed, would come on top of the 300,000 bpd it promised to pump this month.” —Livemint (part of the Wall Street Journal Digital Network), June 16, 2008 (That’s another 500,000 barrels of oil apparently not purchased.)

Now, just for fun, let’s add up all of the excess oil on the market, resulting either from cutbacks in demand, as in the U.S., Asia, or Korea, or from surplus production from oil producers such as Saudi Arabia and in the Gulf of Mexico. Just in the articles I cited, it comes to 1,989,000 barrels of oil a day. That does not include the upcoming Saudi Khursaniyah field that will open in August with another 500,000 barrels per day in production. Some shortage, huh?

And that’s just one week of articles. And, to be fair to the oil market and the spirit of this column, the world did lose some production out of Mexico, more out of Nigeria; Russian production is down slightly; and the Thunder Horse platform in the Gulf of Mexico, three years late thanks to hurricanes, is not fully operational as of this writing. But, then again, the surplus 1,989,000 barrels of oil per day we counted did not include what’s potentially in those 15 oil supertankers leased by Iran and parked in the Persian Gulf. Now is also a good time to note that on June 20, Saudi Arabia announced that its Khurais oil field would be online by this time next year, and that would contribute another 1.2 million barrels of oil per day to the world market.

Now this is admittedly a dog’s breakfast of tidbits. The Iranian crude is floating around due to limited refinery capacity for their heavy crude. Ditto Saudi Arabia, whose “sour” crude currently offer is less prized than sweet crude. But the IEA similarly encourages an unduly superficial discussion of the oil situation by glossing over the fact that to the extent there is a supply/demand issue, it’s in the light grades of crude, and the comparative abundance of sour crude is in part due to insufficient refinery capacity for those grades.

Oh, and there is perilous little mention of the fact that the particularly heavy crudes that Venezuela and Iran have in abundance are economical only when prevailing oil prices are high.

A more pointed and sophisticated discussion of the issues raised by Wallace comes from “Massive Drop in US Demand in April” from the blog Peak Oil Debunked (hat tip reader Michael):

WASHINGTON, June 30 (Reuters) – U.S. oil demand in April was 863,000 barrels per day less than previously estimated and down 811,000 bpd from a year earlier, putting petroleum consumption at the lowest level for any April month in six years, the Energy Information Administration said on Monday.

The lower oil demand was due to rising fuel prices and a faltering U.S. economy that has cut into petroleum use.
U.S. oil demand in April was revised down 4.2 percent from the EIA’s early estimate of 20.631 million bpd to the agency’s final demand number of 19.768 million bpd, and was 3.9 percent less from 20.579 million bpd a year earlier.

The final numbers were included in the EIA’s monthly petroleum supply report and are always different than the initial estimates in the agency’s weekly petroleum report.Source 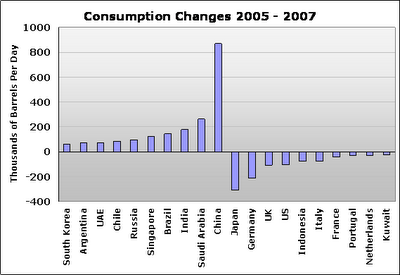 Furthermore, Chinese demand can’t be fingered for price rises in April because Chinese imports were down year-on-year, as I noted earlier:

A decline in China’s oil imports in April, the first year-on-year drop in 18 months, also raised questions over demand. China is the world’s second-largest oil consumer after the United States. […] China’s April crude oil imports fell by 3.9 percent from a year ago to 3.47 million bpd, and were also down from the record of 4.07 million bpd in March, official Chinese data showed.Source

There’s been no serious decline in supply. We’re on the same old plateau, and in fact the IEA reports that supply was up considerably in the 1Q 2008: 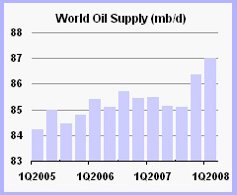 Put it all together, and the “supply outstripping demand” theory of the feverish price action since March is emanating an extremely fish-like odor. U.S. demand down by a whopping 0.8mbd year-on-year. That’s the elephant in the room now.