(Submitted by “Cassandra” from Cassanadra Does Tokyo)

Considering our location high on the ridgeline above the steep slopes of deflation on one side and the inflationary abyss n the other, and despite our slip (in the last two weeks) seemingly towards deflation, I thought it apt to offer up some non-traditional stores of value given the teetering banking system, near vertical ascent of commodities, and the still highly departed real estate indices as multiples of median incomes, all which cause consternation when it comes to preserving capital (at least for the contrarian). Of course, everyone is encouraged to share their own.

Anyone who’s ever happened upon any episode of Antiques Roadshow is familiar with the increasing value of things vintage. Factory Farming and GMO crops that require pesticide and ever-more expensive nitrates could result in nice premiums to the colourful but gnarly-looking heirloom varieties (pictured left). And in the worst case, should things not work out as planned, they would make for delicious eating! 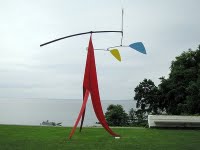 Garden sculpture too provides a fascinating utilitarian place to keep your money both safe and close by – especially if its a veritable work of the late Alexander Calder. Indeed, too big to steal, it simply sits, making itself wondrously beautiful to all who gaze upon it, and best of all, appreciates – even on weekends! Fortunately, such behemoths don’t fit on Ken Griffin’s roof terrace, so their values remain tame by comparison to smaller, more portable impressionist wall-hangings. 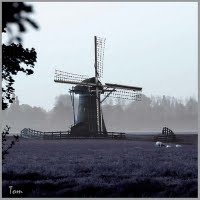 The Dutch have always been sober-minded despite their paradoxical tolerance of cannabis, evidenced here by their practical love-affair with the Windmill. Considering how long these beauties have been around, they must have ultra-long depreciation schedules that would warm the heart of even the most parsimonious purchasers.

War, depressions, floods have not deterred the thronging masses of football fans and the popular spirit of athletic competition. The problem is that professional sports has been gripped by a “Location Location Location”-like mantra that has lead well-heeled psychic-income-seeking egos to pay top-dollar (and pound!) for trophies that will likely hemorrhage cash when the going gets errr ummmm tough – at least until the proverbial screws are turned in earnest. Second-tier sports clubs (like Millwall for example, or even Hamilton Academical) share the same consumer non-durable demand characteristics for a fraction of the price of, say, Chelsky. And Millwall has the added benefit of providing Vinnie Jones-like muscle for less-than-salubrious “other pursuits” if things do, in fact, get even tougher-than-expected.

Little could be more basic than transport. So if oil has “peaked” and cold nuclear fusion, and the BTF Flux-Capacitor remain far-off pipe-dreams, what could be better than owning your own existing commuter rail service?!? Japan remains one of the few places where private rail service demonstrably works AND throws off reasonable cash-flow which after almost two decades of ratings compression are almost attractive. No NIMBY complaints as the lines are laid and more or less paid for. OK so Nagoya Rail’s (pictured here) dated commuter cars need capex for sprucing up, but the earnings yields are reasonsably attractive (compared to JGBs) and there is reputed to be large under-valued land holdings still on the books if ever asset prices in Japan do revive.

One of the greatest stores of value, amusingly, has been paper. Not newsprint, or the ordinary kind, but the type bearing the likeness of the legendary Honus Wagner. The T207 has continued appreciate at quasi-exponential rates, long after my cousin paid for his Harvard education with the unlikely (at the time) and short-sighted (in retrospect) sale for a sum of five-digits. Compared to current values, he might as well have given it away…

Diamond-encrusted skulls, while not MY my metaphorical cup of tea, apparently are de rigeur in certain circles. I certainly am not qualified to pass judgment on this particular one’s artistic merit. Nor do I wish (here) to sully those whose opinion of such a piece tends towards the favorable. So despite my inherent aesthetic and financial skepticism, I bring to your attention that it remains possible that – as with Faberge eggs – such curios might in fact turn out to be sound (and portable!) long term stores of value. 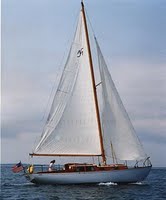 While Waterworld set Kevin Costner’s career back a few notches, it did (years after, at least) provide some things to ruminate about (outside of what Zimbabwe might resemble were it ruled by a crazed Dennis Hopper instead of lunatic Robert Mugabe. But in a world of increasingly sought-after petrol and high energy costs, what could be more useful, apt, and elegantly graceful than a beautiful wooden sloop using nothing but the power of the wind for locomotion. As a boat owner, I do not dispute that the happiest days in boat owner’s life are the day one buys it, and the day one sells it. Yet, I cannot help but dream that in such an environment a modest, but beautiful sailing vessel will become MORE cherished (and valued!!!) with time. Oh, and true to form, no kevlar – cloth sails only please!

Stands of timber are at once both majestic and economically useful. I’ve got some. Swenson’s got some. Brad Pitt and Angelina Jolie just got some 500-odd ha with their Chateau in southern France. I still like RYN and PCL for their combination of still-cheap implied valuation, potential inflation hedge, and the fact that I salivate at the thought of how many large and small-denomination currency notes can be printed with the paper from a single hectare…

Everyone should have a trusty vintage Alembic in their garage, barn, or cellar, though few in fact do, which makes having one all the more attractive. Since long before Shakespeare’s day (epoch and associated alchemist pictured with 16th century still adjacently) the Alembic has provided merriment and valuable liquid goods of exchange for many an entrepreneur and moonshiner. The raw inputs are as plentiful as the multitudes of flavourful and potent outputs. Nice copper Alembics, in addition to their economic usefulness, and yields of hi-proof nectar, also have valuable collectible potential as well as (in a pinch) being a good source of scrap, making for an SOV-triple play! 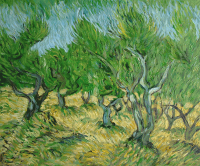 A Grove of Olive Trees is romantic. It is also beautiful. It’s pure economic yield, while less-than-lotterific (unless depicted by van Gogh as the one here), hasn’t prevented the earth on which they stand from appreciating, albeit in fits and starts, and certainly not without hiccups that often last as long as an entire generation. Of course, I am not qualified (as a northerner) to wax too lyrically about their bounty and positive externalities, something I will leave for Charles Butler’s investment manifesto, in this most wise and overlooked of posts.