I followed a rather circuitous, unorthodox route to the little corner of Wall Street I occupy, so I don’t really know what goes on in all those big, glass-walled buildings that turns eager, bright-eyed young graduates of the finest schools into cynical, herd-following, careerists. But I imagine that early in orientation an avuncular veteran of the wars is trotted out to impart the wisdom of his years. Buy low, sell high. Bond yields up, bond prices down. Don’t fight the Fed.

The wisdom of that last saw is called into question when the events of this decade are scrutinized. Oh sure, the markets manage their reflexive, 3% jumps on the days when the Fed cuts, particularly when it goes 50 or 75 bps 40 minutes before the markets open after a long weekend, as has been its wont in the recent past. But viewed from a slightly longer term perspective, the Fed’s interest-rate setting power—note the distinction between that specific power and the myriad special “facilities” it has established over the last 8 or so months, where the Fed most certainly has had an impact—has become less and less effective over time.

Roughly since the bursting of the tech bubble, the credit markets have frustrated Fed policy at every turn, moving in opposition to the Fed funds. Stephanie Pomboy of MacroMavens refers to this as the broken lever. Below are two charts illustrating the Fed’s impotence, courtesy of MacroMavens. 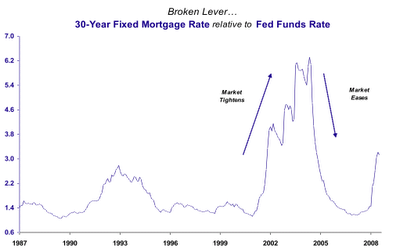 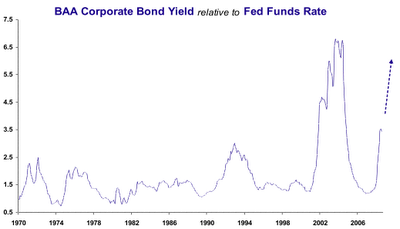 And here’s a chart, courtesy of Jim Bianco of Bianco Research, showing the changes in rates across a broach spectrum of credit instruments, from before the Fed’s first rate cut last August, until now. 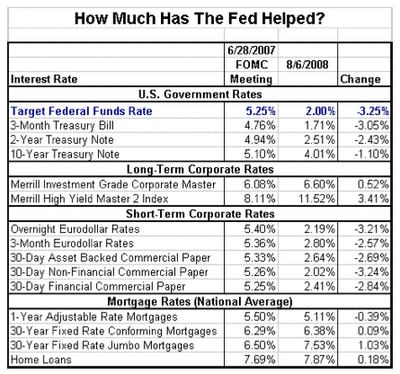 One could argue that the ineffectiveness of Fed interest policy today is simply a function of the old concept of pushing on a string, that the monetary transmission mechanism breaks down during a debt deflation/liquidity trap. You’ll get no argument from me; that’s definitely a big piece of the puzzle. But I think there’s another factor at work here as well.

At some point in the 1990s, Chairman Greenspan realized that he had a partner in the serial liquidity gushers he used to keep the economic expansion rolling ever onward. The GSEs and the entire shadow banking system that arose around them were all-too-willing accomplices in his effort to make certain that the liquidity pump was always primed. Initially, this must have been a seductively attractive realization: that Fannie, Freddie, and the Wall Street banks were only too eager to create credit by the truckload, allowing the Fed to save its bullets for the really dire moments.
But as interesting to ponder is the moment when Greenspan realized that he’d struck a deal with the devil, that servant had become master, Easy Al turned into Flaccid Al. Somehow in thinking about that turn of events, the image of the Sorcerer’s Apprentice from Disney’s Fantasia comes front and center, the shadow banking system turned into an unstoppable monster. Doug Noland of the Prudent Bear was the indispensable chronicler of these developments in his Credit Bubble Bulletin reports. His report from February 2004, The Curious Greenspan and the GSE, is a great one to look back at with the benefit of hindsight (Thanks, Fred). http://www.prudentbear.com/index.php/archive_menu?art_id=3130

In it, Noland goes so far as to speculate that Greenspan’s infamous endorsement of adjustable rate mortgages, spectacularly ill-timed to coincide with interest rate lows, was a desperate attempt to transfer the enormous interest rate risk sitting on the GSEs’ balance sheets to the individual homeowner. Talk about your unintended consequences! And talk about your irony, with the poor homeowner, or no longer homeowner, but still taxpayer, again on the hook, more directly this time, for Fannie and Freddie’s ill-conceived and overleveraged balance sheet risk.

The market has yet to come to grips with the thought that the Fed’s not in control here. The complacency about risk that a day like yesterday demonstrates (look at the VIX, look at the put/call ratio), with fear of missing a rally far greater than that of actually losing money, bespeaks a rather touching if naïve belief that the Fed’s got our backs. Does the Fed want to keep all the balls in the air? Without question. But that it can do so seems entirely questionable. Just as the shadow banking system came to overpower the Fed, so markets are big creatures, with minds of their own, and although they can sometimes be manipulated in the short term, over longer periods that’s not the case.
Or perhaps I give the market too little credit. Perhaps it has read its history, and recalls Bernanke’s speech at the Milton Friedman 90th birthday party gala. Referring to Friedman’s contention that it was bad (inappropriately tight) monetary policy that caused the Great Depression, Bernanke ended that speech with the following acknowledgement:
“Let me end my talk by abusing slightly my status as an official representative of the Federal Reserve. I would like to say to Milton and Anna: Regarding the Great Depression. You’re right, we [i.e. the Fed—SLF] did it. We’re very sorry. But thanks to you, we won’t do it again.”
Ultimately, the Fed is no toothless tiger. The power of the printing press is the nuclear option sitting in its toolbox, and if Bernanke chooses to wield it, the market could certainly go much much higher. Take a look at Zimbabwe if you doubt me.