The other shoe, as in real economy symptoms of the credit crunch, are starting to show up. One that was widely anticipated was rising default rates in private equity loans. This last cycle was particularly overheated, with not only the predictable peak-of-cycle high prices, which therefore implies high debt levels to make the private equity return calculus work, but also unprecedented lax terms, the poster child being “cov light” deals. Corporate bonds and loan agreements typically contain covenants, which require the company to meet certain requirements, such as a minimum net worth, a certain interest coverage (ie earnings as a multiple of interest charges), restrictions on taking on more debt. Thus if a company’s condition deteriorates, the bank can use the violation of covenants to force a restructuring of the loan.

Because many companies took on heavy debt loads, and more than half the companies are rated junk (in the vast majority of cases not due to downgrades as much as high levels of debt at the time of a private equity deal). Many observers wondered how things would play out in these cov light deals when companies started to run aground, Looks like we are about to find out. And Nouriel Roubini anticipates that junk bond defaults will reach an all time high. Leveraged loans ought to track that performance closely.

The percentage of large syndicated US loans rated as problematic has nearly tripled in the last year, highlighting the damage done by the lax underwriting standards of the private equity boom, …

The annual federal “shared national credits” survey – which examines credit committments of more than $20m held by three or more banks – found that $373.4bn of such loans faced actual or potential difficulties at the end of the second quarter.

The report by banking regulators including the Federal Reserve said many of the loans in the “criticised” category could migrate to more severe classifications, suggested default risk is increasing.

”These portfolios are cyclical in nature and do track the general economy,” said Joseph Evers, deputy comptroller at the Office of the Comptroller of the Currency, one of the four regulators who conducted the examinations. “We may see criticised loans are increasing for a while and top out before getting better.”

Mr Evers said that similar patterns were seen during previous period of economic stress including the early part of the decade and the late 1980s and early 1990s.

The report criticised the underwriting standards that prevailed during the private equity boom. ”Examiners found an inordinate volume of syndicated loans with weak underwriting characteristics,” it said.

“The most commonly cited types of structurally weak underwriting were liberal repyament terms, repayment dependent on refinancing or recapitalisation, and non-existent or weak loan covenants.”

Here is the link to a joint Federal Reserve/OCC press release on the report. A juicy tidbit (click to enlarge): 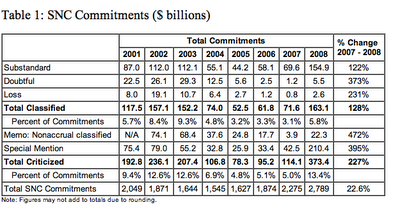 From the text, providing a definition of SNC:

The volume of Shared National Credits (SNC),2 loan commitments of $20 million or more and held by three or more federally supervised institutions, rose 22.6 percent to $2.8 trillion, and the volume of criticized credits increased to $373.4 billion, or 13.4 percent of the SNC portfolio, according to the 2008 SNC review results released today by federal bank and thrift regulators.