Violent clashes in Russia as angry protesters call for Putin to resign over economy Daily Mail. The article hyperventilates, but has photos from protests in two cities.

Is Getting Someone to Buy a Home Worth 5 Kid Years of Health Care? Dean Baker

I have fallen into recession’s web of fear Lucy Kellaway, Financial Times

I was on my way home from work last week when I saw a dead broad-winged hawk on its back in the middle of a two lane road. I drove by it and then decided to take it home and get a better look at a bird of prey since it was dead. I turned around and when I pulled up next to it and stopped traffic, its head moved slightly. I picked it up and it flapped one wing. I set it on its belly on the passenger seat and its head just lay there like it was going to die.

On the 25 minute drive home it started to move its head more and pick its head up. By the time I got home it was standing on its feet and looking around but not afraid of me. I didn’t want to scare it or have it try to fly during the drive home so I had my gloved hand on its back.

When I got home I slowly climbed out of the car and then called around for a vet. I finally found a lady who takes birds of prey at her hospital in Hershey. She said I need to put it in a box for its safety, which now was quite difficult because the bird was wide awake and aware of its surroundings. It must have been stunned from getting hit or flying into a car window.

It looked healthy with no broken leg so Steph and I opened the car doors and I had to force it out using a box. It was in no hurry to leave the car. It dropped to the ground and flew away. It was okay. I think if I would have left it on the road, other cars would have hit it. It just needed time to recover from being stunned. 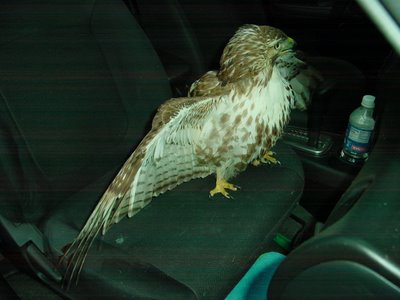 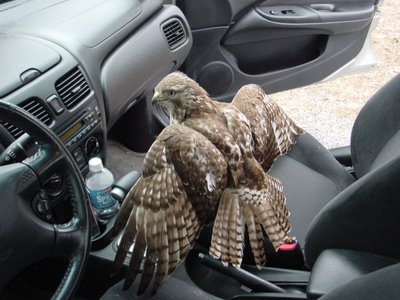 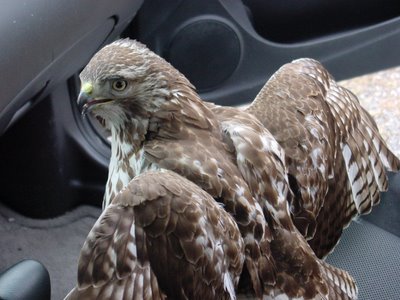 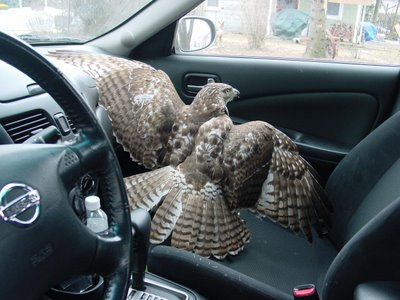 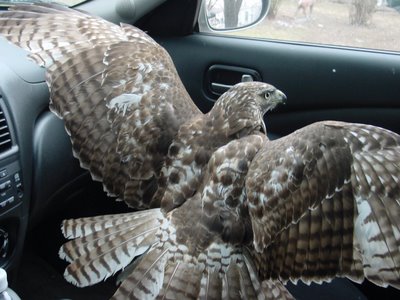