Submitted by Edward Harrison of the site Credit Writedowns

Edward Harrison here. For months now, we have been hearing the Obama – FDR comparisons, all suggesting that Barack Obama is a modern day Franklin Delano Roosevelt, with the opportunity to lead us out of Depression with a new New Deal. I have some serious problems with this comparison. In my view, a comparison between Barack Obama and Herbert Hoover is more apt.

Let’s look back at the Depression for a second. Now, if you recall, Herbert Hoover became president in March 1929 when signs of a slowing economy were evident. By August 1929 recession hit. 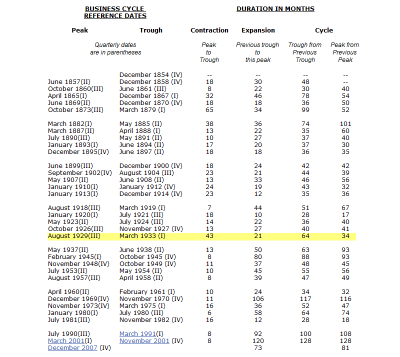 Fast forward to December 2007 when this recession began and we can see that George W. Bush presided over 11 months of recession. So, Obama comes into office during recession unlike Hoover, but also unlike Roosevelt. However, the key difference here is that the economy had already hit bottom when Roosevelt entered and is continuing to worsen for Obama.

What historical period should Obama be looking to then? Clearly, he should be looking to Hoover. And I believe this is very important with the G-20 right around the corner. Any number of pundits from Simon Johnson to Wolfgang Munchau will tell you the G-20 summit will be a big failure. While the Americans are trying to reflate the bubble and bring back the same unbalanced system which got us here, the Europeans are putting their heads in the sand, wishing all of this would go away.

And that’s not a good thing at all. If one thinks back to Hoover again, after a long period of globalization, an interconnected world meant problems in one country quickly became manifest elsewhere. The world’s major nations failed to come together and build a common solution. Some thought themselves immune. But, when the depths of Depression finally came, it was little Austria which ushered it in. And soon, depression was everywhere.

This was 1931. Herbert Hoover was president, not Franklin Roosevelt.