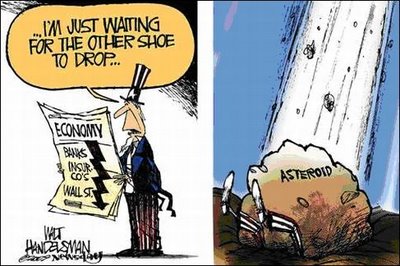 President Obama presented a sober assessment of the state of the economy in a prime time news conference Tuesday, but he insisted his administration has a strategy in place to “attack this crisis on all fronts.”

I listened to the news conference and I was not impressed with the puffy questions that were being asked. I would have stood up and asked him straight out: “President Obama, according to two Nobel-Prize winning economists, your Treasury Secretary’s plan is flawed and will not work. Why are you and your economic advisers pandering to the Wall Street cronies that got us into this mess?”

On Monday I wrote about Krugman’s criticism in my post, Hedge Fund Socialism?. On Tuesday, I read that another Nobel-Prize winning economist, Joseph Stiglitz , believes the Geithner plan will rob American taxpayers:

The U.S. government plan to rid banks of toxic assets will rob American taxpayers by exposing them to too much risk and is unlikely to work as long as the economy remains weak, Nobel Prize-winning economist Joseph Stiglitz said on Tuesday.

“The Geithner plan is very badly flawed,” Stiglitz told Reuters in an interview during a Credit Suisse Asian Investment Conference in Hong Kong.

The U.S. government is basically using the taxpayer to guarantee against downside risk on the value of these assets, while giving the upside, or potential profits, to private investors, he said.

“Quite frankly, this amounts to robbery of the American people. I don’t think it’s going to work because I think there’ll be a lot of anger about putting the losses so much on the shoulder of the American taxpayer.”

Even if the plan clears banks of massive toxic debt, worries about the economic outlook mean banks could still be unwilling to make fresh loans, while the prospect of a higher tax burden to pay for various government stimulus plans could further undermine U.S. consumers, he said.

Some Republican lawmakers have also expressed concern over the incentives offered by the government, which could end up providing private investors with more than 90 percent of the funds to buy the troubled assets. But President Barack Obama has said the plan was critical to a U.S. economic recovery,

Stiglitz, a professor at New York’s Columbia University and a former World Bank chief economist, also urged G20 leaders at their London summit next month to commit to providing greater resources to developing countries and said China should be given bigger voting rights in the International Monetary Fund.

“The voices of developing countries, and countries like China that will provide a lot of the money, are not heard.”

China would be hard pushed to reach its targeted 8 percent economic growth this year, but the important thing was that at least the Chinese economy was still growing, he said.

Stiglitz welcomed China’s proposal on Monday for an overhaul of the world monetary system in which Zhou Xiaochuan, governor of the People’s Bank of China, said the IMF’s Special Drawing Right has the potential to become a super-sovereign reserve currency.

Stiglitz has long called for the U.S. dollar to be replaced as the only reserve currency. Basing a reserve system on a single currency whose strength depends on confidence its own economy is not a good basis for a global system, he says.

“We may be at the beginning of a loss of confidence (in the U.S. dollar reserve system),” he said. “I think there is support for some sort of global reserve system.”

Responding to a question, President Obama shot down the idea of a global currency. He basically knows that the almighty American dollar is what keeps the world anchored to the U.S. military industrial complex.

As far as the Geithner plan, it stinks but the spin doctors like PIMCO’s Bill Gross will have you believe otherwise:

“From PIMCO’s perspective, we are intrigued by the potential double-digit returns as well as the opportunity to share them with not only clients but the American taxpayer,” Gross said.

[Note: remember what George Carlin said about the glue that binds a nation.]

Gross’s endorsement is important after the lack of big investor interest in the debut of the Federal Reserve’s consumer lending program last week.

The Fed’s Term Asset-Backed Securities Loan Facility, or TALF, received only $4.7 billion in requests for loans out of $200 billion on offer, heightening fears that big money managers will also shun the government’s toxic-asset plan.

There is concern that any financial firm getting involved in the toxic asset plan could face retroactive limits on compensation or profits.

“There’s a sense of having gone too far and that there’s fear that anyone that participates in this or any other government program would be subject to increased scrutiny and standards that didn’t exist in the past … I couldn’t discourage that thinking,” Gross told Reuters Financial Television.

“I would point to Secretary (Timothy) Geithner’s guarantee and promise as well as that from (Federal Reserve Chairman) Ben Bernanke that basically they want to maintain and ultimately produce a thriving private sector and the limitations that may be placed on AIG connections, I guess, won’t exist in this particular program. So PIMCO has no fear of that, so to speak.”

He said the Treasury’s public-private partnership plan has “an objective of liquefying relatively frozen portions of the credit market and promoting the extension of new loans in the U.S. economy.”

Gross added: “To succeed, it will require participation from both willing buyers as well as sellers, in addition to the substantial government assistance being provided in the proposed policy package.”

The more I think about this plan, the angrier I get. Why is the U.S. government partnering up with hedge funds, private equity funds and asset managers when they can just force the banks to sell the assets to a consortium of pension funds?

If hedge funds and private equity funds want to co-invest alongside the pension funds, they can do so but on terms that favor pension funds.

Speaking of pensions, Milliman research reveals that the steep drop in the markets in 2008 wiped out five years of gains in the pension plans of the 100 largest corporate defined benefit (DB) plan sponsors:

He added: “At the end of February, the funded status of the Milliman 100 pension plans stood at 74%, the lowest level since May 2003.”

Milliman expects the drop in funded status to result in pension contributions and charges of some $70bn combined.

The firm expects companies to contribute $50bn in 2009 compared to $29.7bn the previous year. The sharp increase is due partly because of the drop in funded status and in part because of changes in funding regulations.

Milliman also said the allocation to equities declined to 44% in 2008, down from 55% the previous year.

Evaluation Associates senior consultant and co-author Paul Morgan said: “The decrease in equity allocations is primarily due to market declines and, to a much lesser extent, a change in investment policies.

“A return to a 55% equity allocation by the end of 2009, either through new investments or portfolio rebalancing, would require a $100 billion investment in the equity markets.”

But in a separate study, Milliman found that after sustaining record losses in 2008, U.S. pension funds are unlikely to return to the high level of stock market allocations favored before the global financial crisis and will probably favor greater bond allocations:

Although the allocation of assets invested in stocks is expected to rise from the low levels seen at the end of 2008, John Ehrhardt, the main author of the report, said he does not see the stocks allocations of these pension funds returning to the 60 percent level last seen at the end of 2006, before the global credit crisis struck.

“By the end of this year I think you will see equities at about 50 or 52 percent, with 35 to 38 percent in fixed income,” Ehrhardt, principal and consulting actuary in New York at Milliman, Inc., an employee benefits consulting firm, said in a telephone interview.

“Assuming a reasonable recovery going forward, I would expect equity allocations to increase to the 50 percent to 55 percent range by mid 2010,” he said.

The proportion of these plans’ assets invested in stocks had fallen to 44 percent by the end of last year from 55 percent a year earlier as stock markets plunged. Allocations to bonds rose to 41 percent from 33 percent in the same period, Milliman research showed.

At the end of 2006, bonds had represented an asset allocation of 30 percent.

Shaken by the damage equity markets wreaked on portfolios, in recent months, pension funds have been adding fixed income in hopes of slowly recouping some of their steep losses.

Since then, pension funds have started to add corporate bonds to their holdings, aiming to collect equity-like returns near 8 percent per year with less risk than stocks.

Since the global financial crisis, “there is definitely renewed interest in some kind of liability-driven investing that in general requires a higher level of fixed income investments,” Ehrhardt said.

Long term investors such as pension funds try to project the approximate outlays they will have to make as people retire, so they need steady annual returns to help match future liabilities. In theory, stocks should generate higher returns than bonds, but only over extremely long periods.

Since 1870 the Standard & Poor’s Composite, now known as the S&P 500, has returned an annual average 8.3 percent, beating the 10-year U.S. government note’s return of about 5 percent and corporate bonds’ returns of about 6 percent, according to Bryan Taylor, chief economist with Global Financial Data in Los Angeles.

Yet market crashes such as 1929 and 2008 can rip apart the assumptions even of 20-year plus investors such as pension funds and insurers and induce them to buy more of those bonds that they consider less risky.

“We’re sticking to our plan, we see some opportunities out there in credit,” Chief Executive Officer John Crocker said today in an interview.

Hospitals of Ontario has been reducing its equity investments since the fourth quarter of 2007, when it shifted about a fifth of assets out of stocks. That helped limit investment losses to 12 percent, or C$3 billion ($2.5 billion), in 2008, topping most Canadian pension funds.

“It dramatically reduced the volatility in the fund through the course of 2008,” Crocker said from Toronto. “If we hadn’t done that, the fund probably would have been about C$2 billion lighter than it is.”

The loss pared assets to about C$27 billion at the end of the year, he said. Hospitals beat the 16 percent annual decline among Canadian pension plans, according to a RBC Dexia report in January. Canada’s benchmark Standard & Poor’s/TSX Composite Index fell 35 percent last year, its biggest drop since 1931.

Stock prices may decline further, even with a rally that has boosted the benchmark index by about 9 percent this month, Crocker said.

“We’re in quite a severe recession but we’d hope or expect that by the latter part of this year that should start to turn a little bit,” he said.

Hospitals has 30 percent of assets in public equities, about 14 percent in real estate and private equity, and the balance in fixed-income, Crocker said. The fund manager has started to look at real estate assets in Mexico, the U.K. and Europe, to add to its Canadian holdings.

“We’re taking a slow and steady approach,” Crocker said. “We’re looking at these other areas, we’ve got funds allocated but we’re being very careful in spending it.”

There you have it, the pension managers at HOOPP got it right by reducing equity exposure since the fourth quarter of 2007, shifting a fifth of its assets out of stocks. Nothing fancy, just plain old common sense that reduced the risk of their asset mix.

They didn’t follow Harvard, Yale, Ontario Teachers’, or anyone else. They just stuck to their analysis and did what they thought needed to be done to protect the fund’s assets.

The next time someone asks you which is the best large pension plan in Canada, remember the acronym HOOPP. Their 2008 results prove that they blew away their Canadian and U.S. peers.