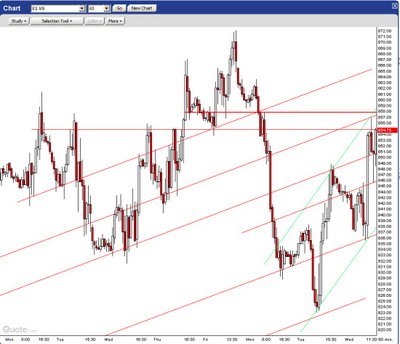 The action in the SP futures market has been particularly heavy handed and blatant since the heads of the money center banks met with the Community-Organizer-in-Chief at the White House. This market is being shoved around like a gaijin granny on the Tokyo subway in rush hour.

To our minds, it is just as likely that we are being set up for a terrific leg down. In our experience the big dogs tend to dominate certain portions of the short side at the apogee of a stock market pump. Our target for a failure point on the SP June futures is about 858-864.

This market is utterly overbought according to the McClellan Summation Index. It can become more overbought, especially considering the huge sums of liquidity added to the market with few productive outlets. Hot money eats beta for breakfast.

Let’s see if they can keep it floating up. This does not look like a sustained ramp however, but the pump that sets up the dump.

At some point the equity market will start moving higher and keep going, to fantastic levels perhaps, if a serious inflation sets in. The stock markets in the Weimar Republic were spectacular, if one ignored the reality behind the appearance. The Fed and Treasury are obviously trying to reflate the economy by printing money and not changing the fundamentals through systemic reforms. Should we be surprised if we obtain yet another dangerous bubble?

We think it is far too early in the game for this, but are keeping an open mind to all possibilities. The market will reveal its intentions, in time.

The best probability based on the data at hand is that we are seeing a pump and dump, in order to provide some income to the beleaguered banks through their proprietary trading desks.

We have not been tracking it, but we wonder if Goldman Sachs has fully placed its large secondary equity offering designed to pay back their TARP funds. The markets often miraculously levitate in sympathetic conjunction with key IPOs and equity tranches.

If they have, then the pump and dump gains in likelihood.

Zero Hedge
SPY Have Become Hard To Borrow
Posted by Tyler Durden at 9:33 AM
Developing story: Traders confirm several locations indicating SPDRs are no longer automatic borrow and have made their way to the Hard To Borrow list: pre-borrow call is needed versus automatic short prior, as not enough underlying inventory.

Have fun hedging the market when you can not short. Wholesale market squeeze is being orchestrated.

At times such as these, Le Café Américain uses several indicators to test the nature of a rally. One simple method however is to just watch a parallel market. We like to watch the Nadaq100 futures for confirmations when the SP is being used to manage a market move.

The banks must be restrained, and the financial system must be reformed and markets restored to balanced efficiency, before there can be any sustained economic recovery. 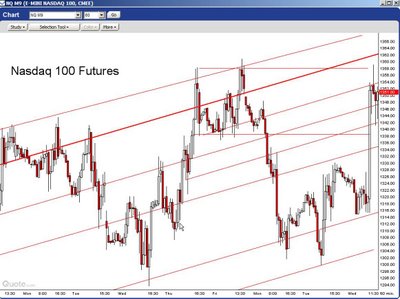 Note: The charts shown were generated earlier this afternoon in the Cafe’s kitchens.