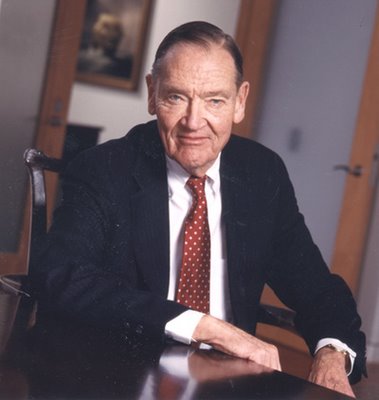 Before I get into the latest topic, I want you all to read Rolfe Winkler’s latest post on Well’s Dodgy Accounting. After that, read Tim Knight’s Be a Fool or Fight It? (I’d rather be a fool and make money in Q2).

Now to the latest topic. Diane Urquhart sent me this NYT article, He Doesn’t Let Money Managers Off the Hook:

EVERY once in a while, if only for sanity’s sake, it is wise to leave our bankrupt era behind and seek out a bit of wisdom from a moral authority. It’s a challenging exercise, given that so many formerly stellar reputations are now shipwrecked and that all those once-smart guys and gals have been reduced to bull-market geniuses.

And yet there are a few voices of reason and integrity left in this upside-down world. One is John C. Bogle’s. He is the founder of the Vanguard Group, an author and an investor advocate. With almost 58 years in the money management business, Mr. Bogle has kept his reputation intact. That alone sets him apart.

But Mr. Bogle is also worth talking to because he is a thinker, a sort of financial philosopher. And earlier this month he lectured at Columbia University about, not surprisingly, the financial crisis and its causes. What he said was illuminating.

In his talk, he cited the usual suspects: borrowers, lenders, securitizers, regulators and Wall Street traders. But he also identified one group that hasn’t been singled out for shame: the institutional money managers that allowed the nation’s financial companies to amass enormous risks on their balance sheets and pay gigantic compensation based on false profits. The big funds let this happen without uttering a word.

“When I read the causes of the recent unpleasantness, I haven’t seen one single person who has said that the owners of these corporations, including the banking corporations, didn’t seem to give a damn about how they were being run,” Mr. Bogle said in an interview last week. “We own all this stock but we pretty much do nothing.”

That “we” he talks about really refers to those in charge of our retirement accounts, pensions and savings: mutual funds and professional money management firms that, as institutional investors, control 70 percent of the shares of large public companies today.

Such an outsize stake means that the institutions wield great power and influence over corporate America. Yet, as Mr. Bogle points out, few institutions have played an active role in board structure and governance, director elections, executive compensation, stock options proxy proposals or dividend policies at the companies they own.

“Given their forbearance as corporate citizens,” Mr. Bogle said, “these managers arguably played a major role in allowing the managers of our public corporations to exploit the advantages of their own agency.”

INDEED, while many still believe that the American way of investing makes ours an ownership society, Mr. Bogle says we live in an agency society, one in which we rely on agents — mutual fund managers, pension fund managers — to make our investment choices for us.

An ownership society was an accurate depiction of where this country was 50 years ago, Mr. Bogle says. Not today.

And he says that the trust we have placed in these agents is undeserved. In his view, the agents have failed to serve their clients — mutual fund shareholders, pension beneficiaries and long-term investors; instead, the agents have served themselves.

Consider fees. Charges levied on mutual fund investors are much higher than those that the identical firms exact on pension clients, for example. The three largest money managers, Mr. Bogle pointed out, charged an average fee rate of 0.08 percent to pension customers. This compares with 0.61 percent charged to fund shareholders.

Money managers also haven’t done the kind of due diligence that might have protected their investors from titanic losses. “How could so many highly skilled, highly paid securities analysts and researchers have failed to question the toxic-filled, leveraged balance sheets of Citigroup and other leading banks and investment banks?” Mr. Bogle asked.

Keep in mind that these failures have occurred in spite of the Investment Company Act of 1940, which states that “mutual funds should be managed and operated in the best interests of their shareholders, rather than in the interests of advisers.”

In the face of all this, Mr. Bogle suggests that we force our agents to relearn what being a fiduciary means. A fiduciary, these managers seem to have forgotten, acts for the sole benefit and interest of another. We need to replace the agency society with a fiduciary society, he argues.

To achieve this, Mr. Bogle says, the government must apply a federal standard of fiduciary duty to institutional money managers. This would force them to use their stock holdings as a cudgel, to demand that directors and executives of corporations honor their responsibilities to their owners.

“We need Congress to pass a law establishing the basic principle that money managers are there to serve their shareholders,” Mr. Bogle said. “And the second part of the demand is that fiduciaries act with due diligence and high professional standards. That doesn’t seem to be too much to ask.”

Some money management firms are publicly traded themselves, and Mr. Bogle says that those firms offer an added layer of deep and serious conflicts because executives running them try to serve two masters: their shareholders and their fund clients.

Such conflicts can be resolved only by separating the money management units from the larger, publicly traded firms, Mr. Bogle said. Under such a plan, the Deutsche Bank Group, for example, would spin off DWS Investments, its mutual fund unit, or Sun Life of Canada would divest itself of MFS Investment Management.

And with a fiduciary law in place, Mr. Bogle believes, money managers would be far more responsible about corporate citizenship than they are now.

“The funds should demand with all their voting power that the companies they own are putting the interests of their shareholders first,” he said. “This would have implications for executive compensation, nominating directors, and other corporate governance matters.”

Mr. Bogle doesn’t think that the mutual fund industry will rush to embrace his idea. The powerhouses in the business have battled fiercely against attempts to shine sunlight on their practices or rid their operations of conflicts.

But as our current financial crisis has made clear, there are significant problems in the structure of the mutual fund business, and now is the perfect time to solve them.

“This will create a lot of opposition, but it is not a regulatory solution, it is a principles-based solution,” Mr. Bogle said. “We would gradually develop a series of decisions about how these things fit into the overall fabric of investment management. Is it easy to articulate? No, but is the principle easy to understand? Absolutely. Shareholders come first.”

It’s a shame there aren’t more John Bogles out there slamming institutional money managers, including pension fund managers for their lousy due diligence.

But don’t hold your breath for major changes. It looks like it’s business as usual and shareholders and pensioners will pay the price.