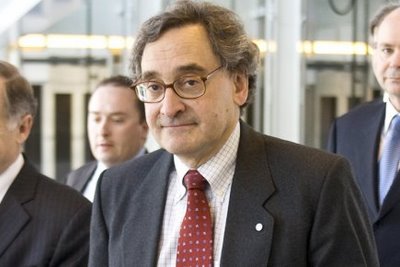 It didn’t take Michael Sabia long to shake up the ranks at the Caisse, Canada’s largest fund manager. Konrad Yakabuski of the Globe and Mail reports that Mr. Sabia is targeting risk controls:

The new head of the powerful Caisse de dépôt et placement du Québec has set the tone for his mandate by putting the emphasis squarely on risk management and a shift in the $120-billion pension fund manager’s culture.

In an executive and organizational shake-up unveiled Thursday, Michael Sabia tapped Susan Kudzman to become the investment giant’s chief risk officer and doubled the ranks of the risk management division. With the move, Mr. Sabia aims to “change the culture” of Canada’s biggest institutional investor, which was rocked by massive losses last year.

“Risk management is not only a question for the risk management team,” Mr. Sabia, the former BCE Inc. chief executive officer named Caisse CEO in March, said on a conference call with journalists. “It’s a challenge to change the culture” of the whole organization.

Much of the task will fall to Ms. Kudzman, who will see her division add 24 new positions and become responsible for implementing a series of measures – 60 in all – identified by the board of directors to enhance the Caisse’s risk management practices.

Ms. Kudzman, an actuary by training, joined the Caisse in 2005.

She has been at the centre of criticisms that Caisse risk management practices were inadequate in recent years. She was previously executive vice-president, depositors and risks, but now cedes responsibility for relations with the 25 pension and insurance funds managed by the Caisse to focus exclusively on the revamped risk management efforts.

Mr. Sabia defended her promotion, insisting her “profound understanding of the challenges of our current situation and our milieu” would enable her to implement changes faster than an outsider could.

Of the 60 measures to improve risk management, 13 are deemed a priority, Mr. Sabia said, and 10 of them will be implemented before year-end. They include better preparation for unforeseen circumstances, such as last fall’s market meltdown; a new approval process for investing in untested financial products, such as derivatives; and improving the methodologies used to evaluate risk.

Mr. Sabia’s moves, which also include the departure of three top managers, aim to address criticisms that lax oversight of portfolio managers by senior executives was partly responsible for the fund’s disastrous performance in 2008.

The Caisse lost 25 per cent of its value last year – almost $40-billion. Its performance was the worst among large Canadian pension funds, casting doubt on many of the investment strategies pursued under former CEOs Henri-Paul Rousseau and Richard Guay.

Under Mr. Rousseau, who left the Caisse in mid-2008 for a senior job at Power Corp. of Canada, the Caisse invested heavily in non-bank asset-backed commercial paper (ABCP) and has since written off about 40 per cent of its $12.6-billion investment in the now toxic paper. Mr. Guay, who served as chief investment officer under Mr. Rousseau, briefly succeeded him as CEO.

Mr. Sabia revealed Thursday that Mr. Guay, who remained a senior adviser at the Caisse after stepping down as CEO in January, is expected to leave the fund manager in the near future. “Richard is not currently a member of upper management,” Mr. Sabia told reporters. “He is preparing a transition to a new stage of his career.” The Caisse is also recruiting a new chief investment officer, Mr. Sabia said, hinting that the post would be filled by someone from outside the Caisse.

“The Caisse must adapt to the current reality of the financial markets, which is very different from that of recent years, and whose impacts include a decrease of activity in some areas, more volatile markets and more stringent risk management,” Mr. Sabia said in a statement.

The Caisse was caught off guard when markets tanked in October, as massive margin calls on futures contracts left it scrambling to raise cash. It was forced to sell equities in a down market and unwind its positions in currency and stock index futures. Overreliance on statistical risk management models left the Caisse unprepared to face unprecedented market volatility.

At least three top managers are leaving in the shake-up, including Michael Malo, head of hedge funds; chief strategist Christian Pestre; and François Grenier, the head of equity markets. Other top managers will take on added responsibilities, such as the head of private equity Normand Provost, who also becomes chief operating officer. The Caisse’s hedge fund activities are also rolled into the private equity division, under Mr. Provost.

Jean-Luc Gravel was named executive vice-president of equity markets, replacing Mr. Grenier. He had been head of Canadian equities, overseeing the Caisse’s only stock portfolio that beat its reference index in 2008. Its U.S. equity portfolio underperformed the market by almost seven percentage points last year.

Over all, the Caisse is cutting 31 of its 813 positions, once the 24 new risk management positions are taken into account.

The changes are the first major moves taken by Mr. Sabia, since he was appointed to run the Caisse last by Liberal Premier Jean Charest. His nomination was controversial in Quebec, given the anglophone Mr. Sabia’s shallow roots in the province and mixed record running the telecom giant.

Some of my thoughts on these changes. I was not surprised to see Christian Pestre, Michel Malo and Francois Grenier let go, but if you ask me, the first executive vice-president that should have been asked to leave should have been Robert Desnoyers, Executive Vice-President of Human Resources and Organizational Development.

How can you possibly change the culture of an organization when you keep the same individual in charge of Human Resources and Organizational Development? That brings me to my second point. How can you say you are placing the priority on risk management when you are keeping Ms. Kudzman on as the Chief Risk Officer?

When a pension fund goes through a $40 billion train wreck, someone in charge of risk dropped the ball. It really was a Caisse of risk management theater. And it wasn’t just Ms. Kudzman’s fault. Her right hand man in risk management, Ernest Bastien, was in charge of the policy portfolio risk. It was his changes that allowed the Caisse to increase their exposure to non-bank asset-backed commercial paper (ABCP). Why is he still a senior risk officer at the Caisse?

Susan Kudzman joined the Caisse in 2005 as Senior Vice-President, Risk Management and Return. Previously, from 2000 to 2005, Ms. Kudzman was Chief Human Resources Officer and Chief Corporate Officer at BCE Emergis. She also worked for more than 15 years as an actuarial consultant for the firms of Towers Perrin and Mercer. Susan Kudzman holds a bachelor’s degree in Actuarial Science from Université Laval. She is a Fellow of the Canadian Institute of Actuaries and of the Society of Actuaries (United States).

I never met Ms. Kudzman, and hold nothing against her, but I do not see anything in her background to suggest that she should hold such a senior position in risk management at the Caisse. Given her background, maybe she would be better placed as Executive Vice-President of Human Resources and Organizational Development. I am pretty sure she can do a much better job than Mr. Desnoyers.

And there are other things that concern me. I read this CBC article which states the following:

As part of the reorganization, 55 positions will be abolished and 24 new ones will be created, mainly in risk management. The Caisse had 813 employees as of Dec. 31.

In the wake of the global financial crisis, many investment operations have been affected by a drop in activity, notably hedge funds, Sabia said. Therefore the Caisse has decided to combine all investment operations involving liquid markets into two departments: equity markets, and fixed income and currencies.

Normand Provost has been named chief operating officer, in addition to his job as executive vice-president, private equity.

Some good people fell victim to this “reorganization”. People like Andrée Dion who for many years did an outstanding job reporting performance and Benoit Beauchemin who thoroughly researched what the Caisse’s peers were doing in terms of asset allocation and other activities. These are good, solid employees that any organization should have on their team. I am truly shocked to see them go and to see other snakes survive at the Caisse.

And why is Normand Provost, the Executive Vice-President of Private Equity, named the Chief Operating Officer? This opens the door to serious conflicts of interests, namely, someone in charge of investments should not also be in charge of operations.

As far as shutting down internal and external hedge funds, I think this is a mistake too. In the sphere of alternative investments, I am more confident with certain hedge funds going forward than I am with private markets where I see the curtains closing for the next few years.

Importantly, if you really want to focus on risk management, you should develop your internal and external capabilities in liquid absolute return strategies. In the age of deflation, this is where the future lies, not private markets.

Finally, a recent poll shows that Quebecers want the government to get more involved with the investment decisions of the Caisse de dépôt et placement du Québec. Pensions and pension funds are the topic of heated political discussions in Quebec and in Ottawa these days.

As I watch these big funds repeat the same mistakes over and over again, I am starting to think that the stewards have to step in and conduct thorough performance, operational and fraud audits by independent experts on all activities as soon as possible.

As for the basket Caisse, I hope it’s not Caisse Sera Sera, but I have seen this movie before and it doesn’t end well. As I told a friend of mine today, the “easy” part is to cut people. It’s much harder building an organization around dedicated people who share your vision and values and want to see the organization thrive.

This is Mr. Sabia’s most difficult challenge and it lies straight ahead. But if he is not careful, surrounding himself with knowledgeable, dedicated people who he can trust, his coup d’état might be short-lived and the Caisse’s days could be numbered.

Before I forget, Amy Long of Two Sheps That Pass contacted me and wanted to pass along this message:

I wanted to let you know about a unique event happening during the upcoming Berkshire Hathaway shareholder’s meeting weekend, on Saturday, May 2nd, that I thought might be of interest to you and your readers.

Warren Buffett’s son, Peter, will be returning to his hometown for an evening of ‘Concert and Conversation’ at The Rose theater. All proceeds from ticket sales are going toward the Omaha-based foundation, Kent Bellows Studio and Center for the Visual Arts.

Peter’s ‘Concert and Conversation’ serves as an entertaining and informative look into the life of a man with a truly unique upbringing. His open discussion about the lessons he’s learned as the son of one of the most noteworthy investors of our time and its effect on creating the man he’s become, acts as a true testament that life is never a straight road. The evening will include live performances of selections from Peter’s album releases including his latest, Imaginary Kingdom, punctuated with videos from his film/television work and philanthropic activities.

An Evening of Concert and Conversation with Peter Buffett