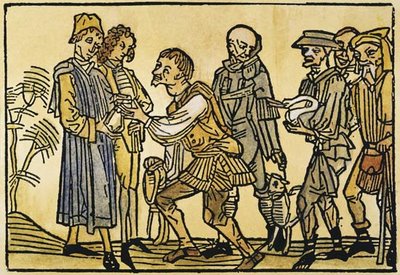 More on pensions apartheid. Bill Tufts of Fair Pensions for All sent me this Globe and Mail blog entry, In feudal age of pensions, renaissance must come:

He calls it our “Modern Feudal System.”

A system where a few have a lot and the majority have – or will have – very little indeed.

The difference-maker in our futures, says Bill Tufts, is going to be our pension plans. Public or private. Gold-plated pensions versus pensions that might not even hold a coat of yellow paint.

“Church and King have been replaced by Government and Big Business,” says the Hamilton-based pension specialist with WB Benefit Solutions. “In the feudal age, the church and nobility always wrestled for the purse of those trapped in the caste system. But the poor serf still paid with everything he grew or could make.”

On his blog and in articles and talks, Tufts has been arguing that the average public servant in Canada will end up with a pension valued at close to $1-million – while the average taxpayer is looking at retirement with less than $150,000 in RRSPs or a small company pension.

The world financial meltdown, he says, has created a situation in which private-sector pensions are under siege – some to the point of vanishing – while public plans are not only protected but, in certain cases, will be topped up in the event of a shortfall by taxpayers who will never collect such a pension themselves.

“People are resentful,” he says.

He also says people are becoming increasingly aware of the situation. The North American media have called it “pension envy,” while the British press has warned about a “pension apartheid” in which retirement lifestyle will be decided largely on whether or not the retiree collects a healthy, protected and often indexed public pension or a squeezed and potentially fragile private one.

Tufts’s message is not popular in certain quarters. He calls himself a “libertarian” with a deeply conservative bent, and says he understands perfectly why some government and union workers would lash out at him when he talks about the growing and unfair “gap” between their pension plans and the plans of most Canadians.

“There’s a lot at stake,” Tufts says. “I would be struggling just as hard as them to keep what I had.”

Bill Tufts and others call it “pension envy” – and it is not merely a Canadian phenomenon. It is a simmering topic in Britain, and in the United States it is increasingly becoming an issue.

New York Mayor Michael Bloomberg this week says his own city’s pension system is “out of control.”

Bloomberg, who was elected largely on promises of financial prudence, says in the eight years since he took office the city contributions to the pension plan have risen almost five-fold, from $1.4-billion to $6.3-billion (U.S.).

The pension plan now gobbles up one dollar out of every $10 in the city budget.

Critics say Bloomberg has only himself to blame, having been so generous with pay raises to the city’s 300,000 or so workers. By raising their wages, The New York Times points out, he himself guarantees bigger pensions on retirement. And with pensions typically 50 per cent of salary, the costs are only going to rise even further.

It doesn’t really much matter how public service pensions get so high – politicians voting for their own, unions successfully bargaining – and there would be no complaint to be had if private pensions weren’t stalled or shrinking, at times even vanishing, at the same time.

Bill Tufts likes to compare an Ontario auto worker for GM with an Ontario teacher. The auto worker, he says, is terrified his or her pension – which Tufts estimates averages around $18,000 a year – is threatened. A teacher at the highest end of the teachers’ scale, on the other hand, has retirement security and will collect a pension that Tufts estimates at $50,000 a year. Lucky are those who qualify.

He argues that public pensions are higher than necessary if you apply a rule-of-thumb that workers generally see a 30 per cent drop in living expenses when they no longer go to work, no longer need to park, buy lunches, have that second car, etc.

He says there is increasing anger over the discrepancy between public and private pension plans, but he’s not predicting a citizens’ revolt or anything close to it.

Instead, the Saskatchewan native likes to think a Canadian solution will find its way, just as so often has happened in the past with such government initiatives as medicare and equalization.

What Tufts is calling for is a cross-country “crusade” to convince the national government – not provincial governments – to implement a “supplementary pension plan” that would be available to those workers in the private sector who might like more protection and better benefits and are happy to pay for this security with their own money.

“The ideal solution,” he says, “would be some sort of meeting in the middle, more money for private pension plans, public pension plans giving up a bit. It is, unfortunately, a win-lose situation.”

For that reason, he doesn’t see the public sector giving up anything that has been hard fought and won. However, he believes the federal government could and should provide a way – perhaps through a revamped Canadian Pension Plan – in which people could, on a voluntary basis, have more of their retirement savings in a plan as solid and secured as those enjoyed by the public sector.

One headline writer at the C.D. Howe Institute has called it “A Pension in Every Pot” – a play on Herbert Hoover’s famous election promise of “a chicken in every pot.”

Bill Tufts doesn’t have all the answers but he does have one question that is increasingly being asked about the growing difference between public and private retirement plans:

“How,” he wonders, “are people going to get over that gap?”

On Thursday morning, CBC radio had a discussion on this topic:

There are public sector picket lines up in a various parts of the country this morning. In Vancouver, ambulance paramedics have been on a picket line for 3 months – 5 percent of them anyway because the rest are designated as essential workers and only 5 percent are allowed to picket at one time.

Windsor’s city workers in Ontario are in week eleven of a strike. And Toronto is moving into a fourth day with no garbage collection because of a city-wide strike of about 24-thousand municipal workers. And as the temperature climbs toward 30 degrees, the city’s residents aren’t happy. The Current’s Natasha Dos Santos was at a transfer station yesterday, where people were lining up to cross a picket line to dump their garbage.

The main issues in the labour dispute are health benefits and the right to bank sick days. And, as you heard, many people think the worst economic downturn in decades is the wrong time for unions to be going to the wall on those issues.

But Paul Moist begs to differ. He is the National President of the Canadian Union of Public Employees. CUPE has 600,000 members across Canada, including the striking Toronto workers. Paul Moist was in our Ottawa studio.

But according to a poll conducted on Monday and Tuesday — the first two days of the Toronto strike — more than three quarters of residents are opposed to the job action. And 81 per cent would like to see the Ontario Government legislate the municipal workers back to work. Catherine Swift is no fan of the strike but thinks unions should be making concessions during recession. She’s the President and CEO of the Canadian Federation of Independent Business and she was at her home just outside Toronto. And Jim Stanford is an economist with the Canadian Auto Workers Union. He was in our Toronto studio.

You can listen to this interesting discussion by clicking here and then going to part 3. Jim Stanford made an excellent point when he said that the financial crisis was caused on Wall Street and now it’s Main Street and the unions that have to give concessions.

But Catherine Swift was right to blast those generous public plans and to question the health of city pension plans. There is no transparency on city pension plans, many of which operate in the shadows of city treasurers. When is the last time you saw a detailed report on Toronto or Montreal’s public pension plans? This is another scandal that will hit taxpayers hard.

Finally, the FT reports that in the U.K., Ministers last night abandoned plans to increase the taxpayer contribution to the pension scheme for MPs ahead of a potentially embarrassing vote.

The government backed down hours after the Liberal Democrats and Conservatives said they would vote to stop a 7 per cent rise in the public contribution to MPs’ retirement benefits.

The plan was designed to address the growing liabilities of the scheme. A proposal will still go forward to increase MPs’ contributions into their pensions by £60 a month. But it was unclear whether MPs would increase this amount to make up for “freezing” the official taxpayer contribution.

Talk about adding salt to the wounds of pensioners. In the feudal age of pensions, voting to increase taxpayer contribution to the pension scheme for MPs is just another example of stupidity and arrogance. The only thing worse than that is collecting millions in bonuses after losing billions of dollars.