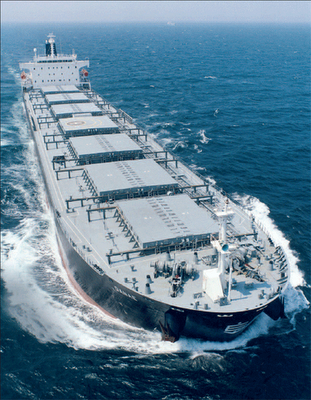 Consultant Luc Vallée, the former chief economist at the Caisse de dépôt, started writing his own blog which he aptly calls The Sceptical Market Observer. In his first post, Luc asks: Are we out of the woods yet? Don’t count on it! and concludes by stating the following:

According to Desmond Lachman, Resident Fellow at the American Enterprise Institute “… it is all too natural to be looking … for signs of green shoots that an economic recovery might have begun. However, rather than grasping at straws, US policymakers would do better to honestly ask themselves … whether the policy measures taken to date (are) commensurate to the enormity of the challenges posed to the US economy by the most severe asset price and credit market busts since the 1930s? … The difficult global economic background would also seem to heighten the urgency that US policymakers refrain from wishful thinking about an early bottom to our economy.”

While I agree with Luc and Desmond Lachman that the structural problems of the U.S. economy pose serious challenges to policymakers, there are signs of a trough in global economic activity.

The OECD’s Composite Leading Indicators (CLIs) point to an easing pace of deterioration in some major economies:

While is still too early to assess whether it is a temporary or a more durable turning point, OECD composite leading indicators (CLIs) for April 2009 point to a reduced pace of deterioration in most of the OECD economies with stronger signals of a possible trough in Canada, France, Italy and the United Kingdom.

The signals remain tentative but they are present in the majority of the CLI component series for these countries. Compared to last month, positive signals are also emerging in Germany, Japan and the United States. However, major non-OECD economies still face deteriorating conditions, with the exception of China and India, where tentative signs of a trough have also emerged. etc.

Other indicators are also pointing to a pick-up in global economic activity. The Baltic Dry Index, or BDI, a measure of shipping costs for commodities, advanced to its longest winning streak in almost three years on demand for vessels to haul iron ore to make steel.

[Note: Some questions are being asked about the ‘erratic’ Batic index.]

Hopes that the worst of the financial crisis is over sparked a rally in the markets in the second quarter of this year, the world’s top central bank body Bank for International Settlements said Sunday:

However, the rebound failed to reach levels posted before the bankruptcy of US investment bank Lehman Brothers in September and concern is growing about governments’ abilities to pay back debt, BIS said in its quarterly review.

The dramatic collapse of Lehman Brothers led to a freezing up of bank lending as well as sharp falls in stock markets worldwide.

To unblock choked lending, central banks pumped liquidity into the markets. Meanwhile, governments also unveiled massive stimulus packages in a bid to lift the global economy out of a recession.

These moves “contributed importantly to the improvement in investor sentiment,” the BIS said.

“Glimmers of hope that the worst of the financial crisis and economic downturn had passed sparked a rebound in risk appetite among investors in the period between end-February and end-May,” it noted.

However, they “remained some way off” pre-Lehman levels.

In addition, investors are increasingly concerned about sovereign debt.

CDS is a sort of insurance protection in case of defaults, and its spread is the premium paid by the insurance buyer to the seller.

High sovereign CDS spreads means that buyers of such insurance are made to pay more for the protection, suggesting that there is a higher chance that governments would default on their debt.

Likewise, governments are now having to pay higher interests to attract investors to lend them money.

“Moreover, sharply rising deficits have led to concerns about the sustainability of public finances and the ability of some governments to fulfil their enlarged obligations,” said BIS.

“The resulting increases in real or perceived sovereign credit risk may in some cases have induced investors to require higher compensation to hold government debt, thereby pushing bond yields higher,” it added.

BIS cited Britain and the US as examples of countries whose sovereign bonds are fetching higher yields.

Emerging markets’ sovereign credit spreads appeared however to be going the other way. They are narrowing to levels just prior to the failure of Lehman Brothers.

Investors’ appetite for risk assets – emerging market stocks and bonds, commodity currencies, commodities, high yield bonds, and stocks – are all signs of renewed confidence that the worst is over.

After trading lower for most of today’s session, Wall Street rebounded in the final hour. The Dow Jones industrial average closed with a gain of 1.36 points, to 8,764.49, recouping a 130-point decline. Other major indexes finished with modest losses in light trading overall.

Some traders said the last-hour rally was sparked by comments from Nobel Prize-winning economist Paul Krugman, who said in a London speech that he would “not be surprised if the official end of the U.S. recession ends up being, in retrospect, dated sometime this summer.”

Krugman has been mostly downbeat about the economy’s future because he doesn’t believe that the Obama administration has done enough to ensure a strong recovery.

But he already has said that the recession could end this summer. He told an audience in Hong Kong on May 22 that the ending point of the downturn may be dated (after the fact) to August.

Krugman’s concern remains that the recovery just won’t look like much. “Almost surely unemployment will keep rising for a long time and there’s a lot of reason to think that the world economy is going to stay depressed for an extended period,” he said today, according to Bloomberg News.

Evidently, though, all the bulls have to hear is “recession over” to shovel more money into stocks.

That’s a good thing for every investor who’s still riding the spring rally. But it’s vexing the folks who are waiting for some kind of significant setback to get aboard.

Since the surge began on March 10, the Standard & Poor’s 500 index hasn’t had a pullback deeper than 5.4% before buyers have jumped back in. “It’s tough to keep this market down,” said Todd Leone, head of block trading at Cowen & Co. in New York.

The spring rally has caught big money off-guard and now many big funds are in a sittuation where they will be chasing stocks higher.

Countless articles have warned investors not to be fooled by this sucker’s rally, but I happen to agree with those who think the real suckers are in cash:

Let’s get a grip on reality. The bear market ended March 9, and the end of the worst recession since the 1930s–or is it the mid 1970s–is plainly in sight.

There must be a horde of perplexed investors, like Croesus, who have been hoarding cash at no yield because risk aversion compelled them to adopt a conservative approach. Alas, they missed a rally in the S&P 500 that just polished off the best performance in more than 60 years, a 90-day steamroller worth 40% in recouped value. Up already 35% from its nadir in March, it looks like the Dow Jones industrial average will blow right through 9,000. Who knows, maybe 10,000 by summer’s end.

“We can’t say for sure that a new bull market has begun, but this looks to be a whole lot more than a bear market rally,” says BMO Capital Markets, a Canadian firm that produces succinct valuable insights. No more talk of a sucker’s rally. The suckers look to be on the sideline lending their money to banks at zilch.

Stocks broke higher on June 1 even though the yield on 30-year Treasuries climbed back above 4.5% last week. This is what the long bond yielded in August of 2008, just before the meltdown in credit markets during the fall of 2008. Today, the credit markets are healing, as spreads have fallen considerably, and corporations are able to raise tens of billions in the short-term debt market. The yield curve–the difference in yield between short-term and long-term securities–usually widens in advance of an economic recovery, and it has done so. Stocks also rose spectacularly despite the bankruptcy of and the continuing loss of jobs from the automobile industry. Bad news doesn’t seem to be rocking the market like it did a few months ago.

Earnings yields on equities still remain comfortably above the yield on 10-year Treasuries and should have the ability to absorb higher interest rates driven by economic recovery.

There are several other hopeful signs that the recession is near its terminus.

The U.S. manufacturing Institute for Supply Management index rose to 42.8 in May, which usually signals that gross domestic product is expanding rather than faltering. If this 42.8 level manages to rise, “there’s a good chance the recession will be over before the end of the summer,” says BMO Capital Markets. Amazingly, activity in private non-residential construction has also been rising, a sign that the recession may be losing its grip on the commercial property market.

Housing, the genesis of the crisis, is showing signs of stabilization and even amelioration. Pending sales were up 6.7% in April, even if prices are still in the tank.

Heck, even automobile sales improved in May to an annualized 10 million vehicle level, up from 9.3 million in April. This is the best month since last December, though still below the 12-month trend of nearly 11 million vehicles.

There has also been a mini-bull market going on in commodities that has been mightier than the one for stocks. This outperformance by commodities is another leading indicator of an economy about to turn the corner. Oil, which fell to $30 a barrel from $147 a barrel, is approaching $70 a barrel. This is driving the rebound in energy stocks, as well as the Russian market, which had been in the doldrums. Copper has moved higher by more than double.

Commodities can appreciate even more if inflationary expectations grow. Gold, which has rallied to nearly $1,000 an ounce, is being recommended for deflationary as well as inflationary times. It’s the way also to hedge against a declining dollar. Robert Smith, founder of Smith Capital, a fixed-income investment firm in New York, has been putting 5% to 10% of his pension clients’ money into gold through SPDR Gold Shares (nyse: GLD) and Canadian gold trusts.

Fear mongers raise the inflation warning as the next hurdle for equities. Maybe we’ll be surprised about it rearing its ugly head, but it seems two to three years away. Still we have to deal with rising unemployment, a sick Europe, falling real incomes, falling real personal outlays and weak industrial production.

Another factor that helps the Dow is the replacement of two stocks with no earnings–General Motors and –with and . This triggers a reappraisal of the projected Dow earnings. The GM bankruptcy is no market-impacting disaster as its contribution to the nation’s economy is a fraction of 1% of economic growth, though unemployment will rise in the auto dealership and auto parts companies that service the industry.

Looks to Croesus that this market wants to rise, deflation or inflation both be damned!

Is this the start of a new bull market? Nobody really knows the answer to that question. All I can tell you is what I see every single day: the dips are being bought aggressively in the stock market and I see the early stages of a liquidity bubble in some sectors (energy, especially alternative energy like solar stocks).

With each passing day, stocks keep grinding higher. Dips are being bought and nervousness of a global depression is being replaced by nervousness of performance anxiety.

For now, everything suggests that we are moving full steam ahead. My biggest concern is that we are going too far, too fast, heightening the risk of a W-recovery.

But don’t be surprised if this so-called sucker’s rally leaves many of the biggest suckers (pension funds and mutual funds) chasing equities higher. In these markets, being too skeptical can cost you your job.