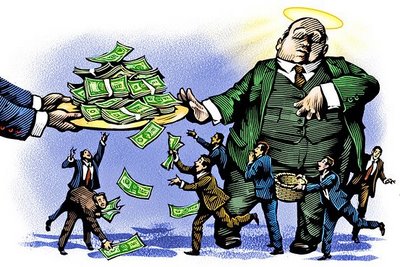 A former colleaugue of mine, Keith Porter, posted an excellent entry on Luc Vallée’s blog on bonuses and benchmarks:

I would like to pick up some of the themes Leo Kolivakis has been pursuing on Pension Pulse about bonuses in the industry.

Let me start with a disclaimer. I am one of the people whose bonus was cancelled by the Caisse earlier this year.

But I want to start before that, and address Leo’s point about benchmarks.

Firstly, it is axiomatic that if you are going to “pay-for-performance” you must know what you are paying for, and that you must pay a reasonable amount.

As Luc Vallée has pointed out in the past, if Warren Buffet had charged 2&20 to run Berkshire Hathaway, the shares would be worth only a small fraction of what they are today. Instead, Mr. Buffet has made himself fabulously wealthy, and many others along side him, by being “reasonable” in his compensation.

I do not think anyone can say that an industry standard of 2&20 is reasonable; for a start, it looks remarkably like a cartel rather than free-market competition. Secondly, what exactly are you paying for?

A couple of years ago, I was talking to a colleague who dealt with Hedge Funds, and he told me a story of one of his external managers whom he had just sacked for bad performance. The ex-manager had been polite, as he could not deny how poor his performance had been, and, ever the sales man, promised that things would recover and that he would keep capacity open for my colleague to return. Yet, when my colleague suggested that the ex-manager cut his fees to reflect the poor performance, the ex-manager became positively abusive; curse my colleague for hisunprofessional behaviour, he would no longer keep capacity open for him, and basically “Don’t darken my door-step again!”

The supposed “High-Water Mark” has proven to be a myth. It is an open secret/ joke that most funds that have to make up the lost ground either close down, only to reopen under another guise, or, more brazenly, get the clients to forgo the requirement “to keep the manager motivated”.

In the public markets where I get to play, things are not so easy to game as there are independent providers of indices, and the pricing is on a daily and transparent basis. Having said that, there are attempts to play with the system, and I think it sheds an alternative light on some of Leo’s complaints. Leo assumes that self-enrichment is the sole driving factor, but I believe ego is also a major factor; we fund managers are not exactly a self-effacing bunch.

A couple of years ago, someone in the C-suite decided that they would modify my group’s index. The idea was passed around all our external managers, and the response was universalcondemnation; apparently it was a well know statistical artifact.

This message did not deter our hero. He insisted that my team would carry out his plan and prove the Nay-Sayers wrong. I, my boss, and my boss’s boss, all traipsed up to the C-Suite to make our views known. We tried everything to no avail. It was clear that he was not interested in anyone else’s opinion. My bosses pointed out that he was artificially transferringperformance from my team to his, transferring bonuses in the same direction, and thus putting my whole team at risk – we were considered a strategic asset at that time. Irrelevant.

And then came the zinger. At his level, he had to be seen to be publishing research that advanced industry understanding. All the other great leaders of pension funds had done the same (I even think Leo’s “friend”, Mr. Lamoureux’s name got included in the list), and his credibility rested upon it! His ego overcame all reason, my team fell apart, which in turn cost the clients tens of millions of dollars more than the theoretical gain from his little project.

Oh, and his name is now mud.

Now, to a thornier question, was the Caisse right to void all bonuses this year? No.

I agree the results were appalling, and I am personally embarrassed to be associated with them, but some people did deserve their bonuses.

Hidden within the debacle were many managers who produced excellent results – I was not one (with 150% turnover in staff, I defy anyone to get good results). Why should they be punished? If they met their targets, they deserve the rewards; frankly, if they managed to achieve their targets in last year’s market, they deserve an even bigger bonus!

One of the classic complaints against fund managers is that we are too short-term in our thinking, and yet cancelling a 5 year bonus because of 1 (very) bad year only reinforces that tendency. Don’t get me wrong, I am not trying to underplay those bad results. They would have reduced this year’s calculation dramatically, and would have fed through the bonus system for years.

Now, the whole system will have to be reset to exclude them, probably at a higher level than previously – see my complaint about “High Water Marks” above. Would you trust an employer that arbitrarily reneges on paying you? If the Caisse has any hope of even partially making up the losses, they are going to need the very people whose bonuses they have just negated. Leo has mentioned more than once the problems the Caisse has had in attracting and retaining qualified staff, whilst my friends still there tell me that there has been an unusual pick up in dentists appointments, smart suits taken out of the wardrobe, and hair being kept unusually well groomed….

The money spent on new risk managers and systems is long overdue, but is very much shutting the door after the horse has bolted. The Caisse has abandoned its strategic advantage in International Equities just as other Canadian funds start to play catch up. When the Caisse decides to get back into this area, probably after they shoot themselves in the foot a couple more times, what credibility will they have when they try and attract in the necessary talent?

When you are about to retire on a government funded, index linked, final salary pension, it is easy to make simplistic populist decisions, but the Caisse and Quebec do not need the simplistic, they need good. Sadly, they are becoming as rare as hen’s teeth.

I will try to keep my comments brief. First, every single public pension plan should publicly disclose their employee turnover rates for each fiscal year. PERIOD. One of the key gauges of an excellent organization is that they are able to attract and retain great employees.

When I was “let go” from the pension funds I worked with, I saw a lot of talented individuals also get sacked on flimsy grounds. If you fight them, the pension bullies try to intimidate you and tell you stuff like “you’ll never work in this industry again” and in most cases they buy your silence. In my case, they managed to piss me off so much that I decided to start blogging about all the nonsense going around at public pension funds.
Again, the pension bullies tried everything in their power to intimidate me. I ignored their lawyers’ letters which they sent me early in the morning by bailiff, their threats and other sneaky and despicable tactics they used to try to shut me up.
When I started informing labor unions and parliamentarians in Canada about all these pension shenanigans, they wisely backed off. One thing about pension bullies: they are cowards who hide behind their high priced lawyers (which are paid for by pension contributions!!!). If you know you are right, stick to your guns and expose them for who they are.
As for hedge funds and their exhorbitant fees, this is not a simple issue. On the one hand, I believe in paying for true alpha. The problem is that most hedge funds offer disguised beta and most pension funds have ill-trained staff to recognize this.
The worst abuses happen in Long/Short equity strategies where fund managers are typically long small cap stocks and short large cap stocks. Big deal, you can easily replicate 95% of all L/S equity hedge fund strategies using a few futures contracts for a lot less and with zero operational risk (full transparency and full control). The same can be said about most other hedge fund strategies. The trick is to have someone competent informing you about replicating these strategies (not just a some math geek with a PhD but someone who has actually traded futures and knows these contracts inside out).
The problem with Long only funds is that they also charge fees and the bulk of these funds under-perform the markets over one, two, three or five years. Why pay some portfolio managers fees for beta?!?!? Why buy mutual funds when they under-perform low cost exchange traded funds (ETFs)?!? It’s also ridiculous to pay someone huge bonuses because they beat the market but still lost billions in a bad year.
My biggest disagreement with the comment above is that public pension funds should dole out hefty bonuses when they experience huge losses. Maybe they should pay out bonuses to individual analysts and portfolio managers who performed well in a terrible year, but no bonuses whatsoever should be going out to senior managers. The Canadian “pension mafia” has already gotten away with murder. Lots of good people are still looking for work while some pension fat cats arrogantly justify their outrageous compensation packages.