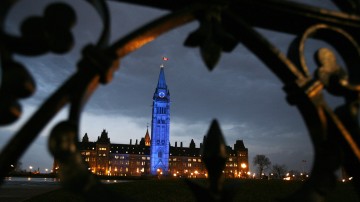 The pension plan for federal government workers lost 22.7 per cent in the latest fiscal year, but paid partial bonuses to its top executives for meeting their individual objectives for the year.

The Public Sector Pension Investment Board reported Thursday it was buffeted by the financial crisis that began last year, seeing its assets fall by $5.1-billion to $33.8-billion as of March 31, 2009, down from $38.9-billion a year earlier.

The pension manager said its equity portfolio lost more than 30 per cent of its value last year, while its real estate holdings were down almost 17 per cent. PSP Investments said its bond holdings offset the losses, however, with government bonds earning a 19.4-per-cent return for the year.

“We experienced exceptionally difficult financial and economic times in Canada and around the world over the last year,” chief executive officer Gordon Fyfe said in a statement.

PSP Investments is a Crown corporation that invests pension money for the public service as well as the Royal Canadian Mounted Police, the Canadian Forces, and the Reserve Force.

Fund chairman Paul Cantor said that due to underperformance in 2009, executives did not receive short-term or long-term bonuses allocated for fund performance. But he said the board of directors decided to pay the portion of short-term bonuses based on achieving individual objectives.

Mr. Cantor added PSP Investments introduced a new long-term incentive plan in fiscal 2009, which is based on four-year investment performance. It is similar in structure to the four-year design at many other large pension managers.

“The deferred incentive payments in 2009 reflect the strong fund performance achieved over the four-year period from 2004 until 2007,” Mr. Cantor said in a statement in the fund’s annual report.

The new incentive program means the poor performance in 2009 will continue to affect bonus levels until 2012. As well, PSP Investments said base salaries for
managers were not increased for fiscal 2010.

You can read the entire FY 2009 annual report by clicking here. The results are horrible, much like other large plans, but for PSP, they are even worse because they severely underperformed their benchmark portfolio (-22.7% vs. -17.6%).
I will revisit PSP’s FY 2009 results when I get back to Canada. One question to Mr. Cantor: How much alpha (return above the policy portfolio benchmark) has been produced since Mr. Fyfe took the helm back in 2003 and was this alpha based on proper benchmarks in both public and private markets?
The answer to both those questions is critical if you are going to justify Mr. Fyfe’s total compensation as well as that of other senior managers. I think it is a disgrace and the federal government should put a stop to these bonuses, including deferred incentive plans based on four year returns.
I am still away on vacation but will revisit PSP’s FY 2009 results when I get back, paying close attention to private and public market losses. One thing is for sure, the results are terrible and do not justify the compensation that was doled out.