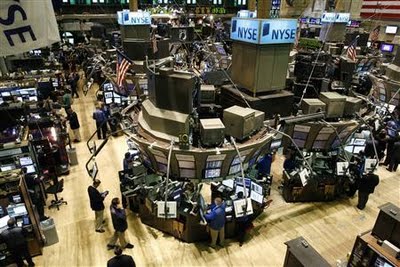 On Monday I reported that some UK pension schemes are shifting assets into bonds. On Tuesday Reuters carried an article, Dow rally for real? “Big Money” thinks so:

Pension managers and mutual fund houses have been among the biggest buyers of the Dow Jones industrial average .DJI in recent weeks, underscoring the growing belief the recession is over, according to an analysis conducted by Thomson Reuters.

The following week, when the Dow approached 9000, pensions and mutual funds were net sellers but only at $578 million, while hedge funds were net buyers of $19 million in Dow stocks but not after selling $166 million the previous week, the settlement records showed.

“There is some momentum lost among pensions and mutual fund investors, but the move is still generally positive,” Shacket said on Tuesday. “These buyers are saying that this market is going to go higher — and not lower any time soon.”

The move by these institutional investors into Dow stocks corroborates with economic data and earnings that have been better than expected.

Tuesday, in fact, the number of contracts to buy previously owned homes in the United States rose in June for a fifth straight month while a report last week showed sales of new homes soared 11 percent in June, the most since 2000. For their part, the 370 Standard & Poor’s 500 index companies .SPX that have reported second-quarter earnings are surpassing estimates by 14.9 percent, according to Thomson Reuters.

Shacket said the settlement records reveal to some degree how “there is some confidence on the part of long-term investors that we won’t have a bad second half.”

So far, the second half has been anything but: The Dow posted returns of over 7 percent in July alone and on the first trading day of August investors saw the Standard & Poor’s topped 1000 and the Nasdaq passed 2000.

Hedge funds, which have appeared to miss the huge rally in recent weeks, also are becoming less bearish.

The Greenwich Alternative Investments Macro Sentiment Indicator — which is based on hedge fund investors employing a macro view who collectively manage a total of $30 billion in assets — showed that 50 percent of those macro managers expect the S&P to continue to move lower.

That’s down from 60 percent in July.

“All of this suggests how investors overreacted to the downside during the first quarter,” Shacket said.

So what is going on? Why are these long-term investors so confident all of a sudden? I am not sure it has to do with confidence as much as it has to do with performance anxiety. In fact, the case for more upside was made today by Mark Dow, fund manager at Pharo Management, a global macro hedge fund with about $2 billion of assets. Dow believes the market can “continue to grind higher for a while” for a number of reasons:

Mr. Dow makes several good points, especially on the USD. As the Fed reduces the balance sheet because banks demand less dollars, you would expect the USD to decline.

If you look at financials, they have been on a tear. On Wednesday, the “scrap financial stocks” rallied sharply, most likely due to massive short-covering. Click on the image below to enlarge and see for yourself:

As you can see the big moves were from AIG (+63%) and Radian (+83%) which soared today on massive volume. And you still think the markets are rational and not driven by sentiment and speculation? Yeah right. There is a reason why they call it casino capitalism. And this isn’t the first time I have seen days like this. There is a lot of nonsense that goes on in the markets on a daily basis.

But let me get back to the topic at hand. Big money isn’t just betting on beta, they are chasing indexes higher. Pension funds need yield so they are buying up stocks and mutual funds need to outperform the overall indexes or else they risk losing business.

But pensions are also betting on other asset classes like real estate and commodities. The bet on real estate is way too premature and will lead to more losses for pensions. As far as commodities, I agree with Mike Masters who testified before the CFTC today to ban all investors from making passive investments in commodity derivatives markets.

But for now, pension funds are making a one way beta bet on stocks. They are probably late to the party and chasing the indexes up. The sharp rally in global stocks has brought much needed relief to many pension funds. For example, Irish pension funds saw positive returns for the fifth month in a row in July, with average returns of 6%.

In North America, the Boston Globe reports that the state pension fund is bouncing back:

After suffering its worst year in history, the state’s public pension fund bounced back in July, with a 4 percent gain that boosted its balance to $39.8 billion.

“July was the best single month we’ve had in some time,” said Michael Travaglini, executive director of the Massachusetts Public Reserves Investment Management Board, which runs the pension fund.

The state fund lost 23.6 percent for the fiscal year ended June 30, the biggest decline since the fund was created in its current form 24 years ago. Travaglini also said that performance put the fund in the bottom of quartile of large pension funds tracked by Wilshire Associates for the first time in seven years. He blamed the performance on the fund’s large holdings in stocks, which performed badly, while bonds enjoyed better returns. The fund also fired several investment managers for poor performance during the year.

But now the stock market has turned, and with it the fund’s performance. “It really is a testament to having a longterm focus and a disciplined approached,” Travaglini said. “As bad as 2008 was, we didn’t panic.”

In fact, the board is so bullish on stocks that it yesterday it voted to increase the amount of money the fund invest in equities, and to decrease its holdings in hedge funds, from 11 percent now to 8 percent, based on the advice of its investment consultant. Ironically, hedge funds performed better than the state’s investments overall last fiscal year.

But Travaglini said the investment changes are marginal and added that the board regularly tweaks its investment allocation by a few percentage points.

No mention of private equity but I can tell you that if stock markets keep going up, the private equity market will start to recover too. As far as hedge funds, big players like UBP are scaling back their hedge fund investments to invest more in traditional stocks and bonds.

But this one way bet on beta carries huge risks too. If for any reason growth falters and deflationary headwinds get stronger in Europe, Japan, and in North America, then these one-way beta bets will come back to haunt pension funds.

On that note, I will give pension funds my advice. Start investing in hedge funds that are truly market neutral funds. The big money was made in L/S equity, global macro and CTAs and while I still like these strategies, I think it’s time to focus on finding managers that specialize in market neutral strategies (less beta, more alpha).

If you are going to make beta bets, focus on certain sectors with long-term potential: alternative energy, biotech, pharmaceuticals, infrastructure (both public and private), semiconductors (SMH,USD) and country plays like China and India.

Last but not least, learn to use a few easy option strategies to protect your downside. It’s alright to buy some premium when vol is cheap and sell premium when vol is expensive. Talk to your brokers or independent experts to figure out which is the best strategy for you .

Whatever you do, don’t just make one-way beta bets. This will just lead to more substantial losses down the road.

Jack Lawrence, the founder and CEO of Burns Fry Ltd. died in a plane accident, while flying home from his cottage on August 3rd. Jack Lawrence was one of the men that appointed Diane to Head of Research at Burns Fry, making Diane the first woman in North America to hold such a position. It is interesting to note that Jack and the executives at Burns Fry never attempted once to alter Diane’s reports to advantage the firm in its underwritings. Burns Fry was known for its integrity. Jack Lawrence appreciated and respected the employees of Burns Fry, whose work made an enormous contribution to the stability and growth of the Canadian economy. An independent firm meant that the employees were share owners, which meant each employee carried a huge responsibility for the success of the firm.

It was having had the opportunity to work at this former great firm, Burns Fry, under Jack’s leadership that must have given Judge Collin Campbell the faith to appoint Diane Urquhart as the financial analyst for the under one million dollar owners in the Asset Backed Commercial Paper Bankruptcy Court Proceedings. The settlement for the retail sector was one of the largest in Canadian history – $190 million for 1800 retail families. It was very sad news to learn of Jack Lawrence’s death. There were few people like him, who shared the ownership of the firm and who entrusted the survival of the firm to his many employees. Jack set a standard for employee relationships, that few people do today.

Jack has left us, but his integrity, and desire to contribute to Canadian society lives on through many people he worked with. Jack Lawrence gave Diane an opportunity for which the Urquhart family is extremely grateful .