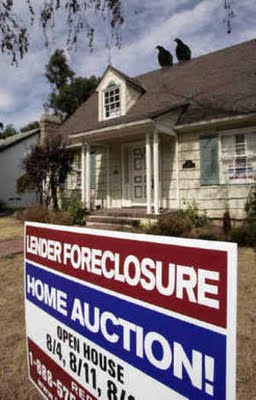 On Wednesday, The Sceptical Market Observer, Luc Vallée, posted a piece on his blog, a simple bailout plan for housing and US economy.

Luc cites Martin Feldstein’s article, “How to Save an ‘Underwater’ Mortgage“, published in the Wall Street Journal last Friday:

“Here is an alternative: Make an attractive offer to all homeowners but tweak the incentives so as to attract only those needing help. Specifically, offer to all existing homeowners (of owner-occupied homes), mortgage relief up to 33% of the value of their mortgage in exchange for the same percentage of equity in their home. As a virtue of being offered to everyone, all individual decisions to accept or refuse the government’s offer would provide much needed information about the quality of individual loans. This information would represent the Holly Grail for the financial sector as it would allow banks and investors to finally put a fair value on mortgage pools.

“The opportunity for each individual homeowners to “sell” a portion of their home to the government (in a debt-equity swap fashion) also offers the following: truly significant mortgage payment reductions for borrowers, some breathing room to support consumption and a huge quality improvement in banks’ balance sheets. If designed as a simple mortgage pre-payment program, such a plan could be implemented by motivated banking loan officers within six months.

“A simple example would also convince the reader that the offer would be rejected by homeowners with enough home equity. This means that each individual decision to reject the government’s offer would also send a strong signal to the market as to who would repay their mortgages in full without government help.

“In the previous example, if the house were to be sold early for $220,000, the outstanding bank mortgage ($180,000) would be repaid first to the bank and the balance of the proceeds from the sale ($40,000+) would go directly to the restructuring government entity. The balance of government equity ($20,000-) would then be converted into a fully recourse loan yielding 3%. The conversion of the equity into a full recourse loan would provide a disincentive for the owner to sell his/her house early or to enter foreclosure. This would help stabilize the housing market by keeping more homes off the market until prices have appreciated enough. Moreover, the full recourse conversion would also deter borrowers with no prospect of ever repaying their loans from entering the swap agreement; providing much needed information about which loans which should be definitely written off. Moreover, the relief effort would focus on making sure that only troubled, but salvageable, borrowers are turned into viable homeowners.

“Assuming an average mortgage relief of $60,000 for the 12 million homeowners with little or marginally negative equity today, the total cost of the plan would be $720 billion. However, as we saw, most of this money could be recovered, once the homes are sold. Moreover, if banks were forced to first write down each mortgage by 5% before being entitled to the debt-equity swap money, the initial funding for the scheme and the ultimate cost to taxpayers could be substantially reduced.

“Allocating the bail-out money directly to American homeowners would be a politically superior strategy than buying up banks or let hedge funds and private equity investors buy the toxic waste; not least because it would allow many families to stay in their home. Banks, on the other hand, would be much closer to assessing their loan portfolios at values that might actually reflect their true worth under more favourable market conditions. This prospect alone would promote the strong support of banks which in turn would speed up implementation and thus could help avert bank nationalization.

“By taking an equity position in homes, the government insures a certain fairness as it extracts something (i.e. equity) from over-leveraged homeowners, without passing moral judgment, rather than trying to determine administratively who should get it. Finally, as the leverage is transferred from over-leveraged owners to the government most able to support it, the risk to the economy is also considerably reduced.”

Isn’t this simple enough? As I said above, please let me know what you think!

This past week, I received an email from Ralph Liu, Chairman & CEO of Advanced e-Financial Technologies, Inc. (AeFT).

Ralph sees problems with Feldstein’s proposal and he wrote me the following comment on how he is working on innovative solutions to tackle the US housing crisis:

There have been many proposals on how to fix the mortgage crisis. It does not seem that the politicians have not been presented what the better ways may be to fix the foreclosure problems but rather the politicians lack of political will to adopt those good ideas. Looking back in history, most of the time people do not get what they deserve that makes most economic sense. They get what the politicians tell them to get. This time around it seems not much different from before.

So irrespective of what route we may take to get out of this current crisis. Even no measure is taken there will still be an end to it when the last house gets foreclosed. At that time what alternative housing finance system should we adopt for the future? Are we going to tread on the same old path or should we look for something that will give us a paradigm shift in the way people own homes going forward?

FARM (Flexible And Reversible Musharakh or Mortgage) is one of such paradigm shifting new methodologies that many governments could consider. We been working on developing consumer financial products that could offer the same economic benefits of the conventional complicated financial derivatives without its opaqueness and potential shortcomings for the past 8 years. It has been a long way to get to this fine-tuned and come up with a mature design of a new consumer housing financial product.

First we developed a quantitative methodology based on the cost differentials between owning and renting a real estate property in order to put a value of the two major benefits of owning a real estate property. The first is the right to occupy and use a property similar to a conventional renting. Second is the right to future financial gains from appreciation and the obligation of bearing the risk of financial losses due to depreciation. We created a new financial instrument called a SwapRent contract to represent this financial profile of a property ownership. We then took one more step and split the SwapRent contract into two more sub-contracts to separately represent each of the future upside appreciation and the downside depreciation risk.

The secondary marketplace for people to trade these new SwapRent contracts is called REIDeX and currently hosted at http://www.REIDeX.com . For those interested in more details please visit our research web site at http://www.SwapRent.com .

Those quantitative methodologies are the hard part. Once a new way to quantify and trade these future appreciation units of owning a property is done then things could get a lot more interesting when you start applying these new methods. For example, FARM is a new consumer property financing product where would-be homeowners could start out as a renter and buying these appreciation units along the way based on his economic monthly income capability. His down payment will entitle him as a co-owner with the bank in a trust account that he rents from. This co-ownership legal trust structure is already a common practice in many conventional Islamic mortgages that FARM is also based on.

The homeowner could purchase the entire property from the bank any time if he has the money. If he doesn’t, then the monthly payment will first go to the rent so that he will have the right to occupy and use the property. Whatever additional monthly income capability will then go to purchase these appreciation units to mimic a conventional property ownernership. Two immediate benefits are first, he could purchase the appreciation potential of the property for only part of the entire house value if he does not have enough income to own entirely. This opens up opportunity for a lot more people to own homes who normally may not become homeowners without such a new product, hence the increased portable housing affordability. In the past, the way for these low income families to own homes was to be offered a subprime mortgage. That was the root cause of our current financial crisis. SwapRent and FARM allow them to occupy and use the property and still get to own part of the future appreciation without the risk of being foreclosed.

That leads to the second advantage which is when the homeowner loses his monthly income capability due to loss of job or disability in the future, he will only lose part of these future appreciation units. As long as he has the monthly income to rent he could continue to own, occupy and use the property for whatever length of time he wishes. Nobody will be able to foreclose and evict him as in addition to being a renter of the house he himself is still a part owner of the house in the co-ownership trust he set up with the bank before. That is why we call this new invention FARM a new housing finance product without foreclosure possibility.

From the institutional investors’ perspective, pension funds for the first time could have a liquid way with very low transaction cost to establish a position in pure residential real estate market exposures through these SwapRent contracts that either the homeowners or the co-owning banks would like to pass on to other investors. They could therefore easily further diversify their investment portfolios with many residential properties located in different parts of the country or even different parts of the world. The residential real estate could finally be treated as a separate investable asset class in the institutional investment world.

There are more details to the execution part of the methodology then could be covered here. If you have any questions, contact Ralph Liu directly at ralph.liu@swaprent.com and he will be pleased to answer them.

[Important disclaimer: I have no affiliation to Ralph Liu or his firm.]