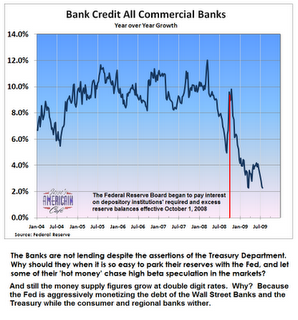 This analysis from Bloomberg is based on some fairly modest economic assumptions. Most of the banks in question are state and regional banks that have not enjoyed the largesse of the Fed and Treasury like the free-spending, Wall Street money center banks, who are sharply curbing lending and raising rates on credit cards and other revolving debt aggressively even for customers with excellent credit and no history of non-payment.

As you might suspect, even the worst of the banks with large percentages of non-performing loans all claim to be ‘well capitalized’ by regulatory standards.

If as indicated more of the smaller banks fail, we will be left with a few, larger, more potentially lethal financial institutions.

The Obama Administration policy decisions, particularly the programs and reserves decision enabled in October 2008, appear to be favoring Wall Street heavily, monetizing debt for the Primary Dealers and the Wall Street market players, while choking off the consumer and the state and regional banks.

Policy decisions have impact, especially when they have the weight of the Federal Reserve, the Treasury, the Congress, and a powerful President behind them. The question becomes are they the right policy decisions? How were they crafted?

Regretfully, most of them were done behind closed doors, with little public discussion or scrutiny, crafted by an army of lobbyists, campaign donors, and crony capitalists galore.

Aug. 14 (Bloomberg) — More than 150 publicly traded U.S. lenders own nonperforming loans that equal 5 percent or more of their holdings, a level that former regulators say can wipe out a bank’s equity and threaten its survival.

The number of banks exceeding the threshold more than doubled in the year through June, according to data compiled by Bloomberg, as real estate and credit-card defaults surged. Almost 300 reported 3 percent or more of their loans were nonperforming, a term for commercial and consumer debt that has stopped collecting interest or will no longer be paid in full. 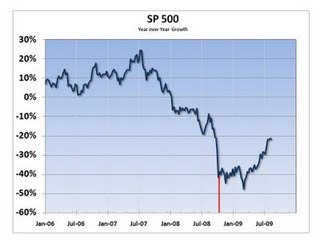 The biggest banks with nonperforming loans of at least 5 percent include Wisconsin’s Marshall & Ilsley Corp. and Georgia’s Synovus Financial Corp., according to Bloomberg data. Among those exceeding 10 percent, the biggest in the 50 U.S. states was Michigan’s Flagstar Bancorp. All said in second- quarter filings they’re “well-capitalized” by regulatory standards, which means they’re considered financially sound.

“At a 3 percent level, I’d be concerned that there’s some underlying issue, and if they’re at 5 percent, chances are regulators have them classified as being in unsafe and unsound condition,” said Walter Mix, former commissioner of the California Department of Financial Institutions, and now a managing director of consulting firm LECG in Los Angeles. He wasn’t commenting on any specific banks.

Missed payments by consumers, builders and small businesses pushed 72 lenders into failure this year, the most since 1992. More collapses may lie ahead as the recession causes increased defaults and swells the confidential U.S. list of “problem banks,” which stood at 305 in the first quarter. 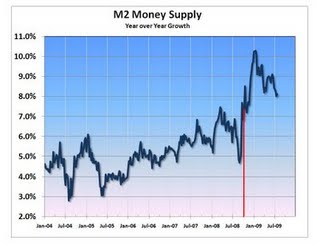 Cash DrainNonperforming loans can eat into a company’s earnings and deplete cash, leaving banks below the minimum capital levels required by regulators…. “This is a fairly widespread issue for the larger community banks and some regional banks across the country,” said Mix of LECG, where William Isaac, former head of the Federal Deposit Insurance Corp., is chairman of the global financial services unit.

Ratios above 5 percent don’t always lead to failures because banks keep capital cushions and set aside reserves to absorb bad loans. Banks with higher ratios of equity to total assets can better withstand such losses, said Jim Barth, a former chief economist at the Office of Thrift Supervision. Marshall & Ilsley and Synovus said they’ve been getting bad loans off their books by selling them…

“These numbers are off the charts,” said Blake Howells, an analyst at Becker Capital Management in Portland, Oregon, referring to the nonperforming loan levels at companies he follows. Banks are losing the “ability to try and earn their way through the cycle,” said Howells, who previously spent 13 years at Minneapolis-based U.S. Bancorp….