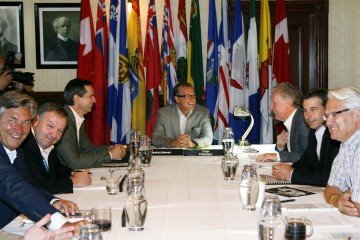 Canada’s premiers met in Regina on Thursday, talking tough about the “Buy American” policy in the United States, pledging to equip Prime Minister Stephen Harper with provincial backing for his meeting with President Barack Obama next week.

But the premiers also discussed another important issue, the pension crisis:

McGuinty said he has another priority – the number of Canadians facing retirement without adequate income. A recent study has shown that by 2030, two-thirds of Canadians will not have enough retirement income to pay for their necessary living expenses, he said.

McGuinty headed into the meeting Thursday by calling for a summit on pensions, saying it’s a national challenge that warrants a national conversation.

“This is an issue that is in some ways independent of this global recession, but the recession has exacerbated or has highlighted some of the challenges associated with folks who don’t have an adequate level of retirement income,” he said.

“We don’t impose ourselves on our kids, who turned to our generation and say … ‘Why didn’t you ensure that you had enough money to retire on?’ “

McGuinty said governments may have to create more incentives to persuade people to sock away money.

Other premiers have discussed setting up provincial public pension plans, which would top up the Canada Pension Plan for people without workplace pensions.

A national summit on pensions? It’s about time! I wonder if his ‘Pension Eminence’, Claude “PE” Lamoureux (he loves private equity, it’s been good to him), the former head of Ontario Teachers’ Pension Plan will be invited. Last time I saw him was when I testified at the Standing Committee on Finance.

Mr. Lamoureux told me to “shut up” after that session, which was a clear sign that I did a good job exposing the shenanigans going on at Canadian public pension funds with bogus benchmarks in alternative investments, most prevalent in private equity and real estate. I understand why Mr. Lamoureux was visibly irritated. He is considered to be part of the “pension aristocracy” and his whole legacy risks being questioned after Ontario Teachers crashed and burned in 2008.

But Teachers’ wasn’t the only one with disastrous results. OMERS took a drubbing in private equity; the Caisse suffered a $40 billion train wreck but had the wisdom not to pay any bonuses whatsoever; Canada Pension Plan Investment Board (CPPIB) lost $24 billion in their FY2009 but their senior managers are smiling; and finally, the Public Sector Pension Plan (PSPIB) lost 23% in their FY 2009 , underperformed their Policy Portfolio by a staggering 5.1% and still managed to dole out $4 million in bonuses ($1.4 million total compensation went to PSP’s President and CEO, Gordon Fyfe, after this disastrous year).

I tell you, those hedge fund and private equity managers are wasting their time. The best gig in town is to be a senior officer at a Canadian public pension fund, especially if you’re working in private markets. You get to fly all over the world first class, get wined and dined by investment managers and get evaluated based on some bogus benchmark that does not accurately reflect the risks of the underlying investments.

And even if you lose billions of dollars, you can always fall back on a four-year rolling return and still pocket a few millions in bonus along the way. If you’re real lucky, some investment manager you invested billions with will hire you away, make you a Vice-President of his Canadian regional office and pay you big bucks while you wine and dine your former colleagues.

Forgive my cynicism but I have seen so much nonsense in my career that I can write books on this stuff. The sad fact is that most of these guys are slimy politicians who do not have a clue about making money in the markets. They look polished, they sound reassuring, but put them in front of a Bloomberg screen and ask them to make you money and they wouldn’t know where to begin. I call them “pension parrots” because they all talk the same nonsense.

Speaking of nonsense, DBRS (remember them? ABCP…) came out yesterday stating that private-sector pension plans in Canada are doing better than one might expect after the drop in stock markets in 2008, and funding pressures should remain manageable.

After reviewing 70 defined-benefit pension plans at Canada’s largest private-sector companies, DBRS said the plans were 95% funded, a “relatively moderate drop” from being 98% funded in 2007.

“In fact, with the past emphasis on reducing pension deficiencies, pension plans are in a strong position to fulfill this goal over the medium term, once an economic recovery begins,” said Peter Schroeder, managing director at DBRS.

The plans, which do not include public-sector behemoths such as Quebec’s Caisse de depot or the Ontario Teachers’ pension plan, had $149-billion in plan obligations and $141-billion in plan assets, representing an $8-billion underfunding gap.

DBRS said challenges do not begin to arise until pension plan obligation funding falls below 80%.

“For the vast majority, the situation is manageable as plans started in a relatively solid position and there has been some regulatory relief. It is safe to say that 2009 performance will be better than 2008, but it remains uncertain whether plans will meet expectations or not,” Mr. Schroeder said. “From a long-term perspective, most plans would improve reasonably quickly with higher asset returns.”

Noting the inherent risk to companies in offering defined-benefit pension plans — which promise benefits in retirement that the company must fund — DBRS said it expected to see a continued shift into defined-contribution plans, in which future funding obligations rest with the employee.

“Defined benefit pension plans have created pressure on liquidity, albeit manageable, at a time when companies have reduced financial flexibility to resolve underfunded positions,” DBRS said. “When they have a choice, companies have been moving to defined-contribution plans that effectively shift the burden to employees. This trend is expected to continue for the foreseeable future.”

Shift the burden to employees? Is that the solution to this pension crisis? I guarantee you that “solution” will ensure pension poverty for millions of Canadians. We are already there.

The time for a summit on pensions in Canada couldn’t come soon enough. I hope to see people like Susan Eng, Vice-President Advocacy at CARP who put out this press release today, sending a strong message to politicians:

CARP calls on the provincial premiers meeting in Regina to take the lead in pension reform starting with a Pension Summit at which retirees have a seat at the table.

The federal government appears unmotivated to act, choosing instead to create yet another research working committee after the Finance Ministers meeting on May 25, 2009 at Meech Lake.

“The issue has been researched across the country by no fewer than three major provincial expert panels. The need now is for the Premiers and their Finance Ministers to sit down and start constructing the solutions and to make sure that those most affected have a seat at the table,” said Susan Eng, Vice President, Advocacy of CARP.

CARP has called for pension reform that will rebalance the interests of plan members and their employers, including strengthening deficiency funding obligations and giving pension members a higher priority in a bankruptcy. There are two current high profile cases – the Nortel bankruptcy and the CHCH pension fund wind up – which are unfortunate examples of why such reform is immediately necessary.

“The time for action is now – how many more pensioners have to be robbed of their retirement security before the government acts. If the federal government refuses to take a leadership role, the provinces can act within their own jurisdiction,” added Eng.

Incremental, or minimalist, change is no longer acceptable to a growing segment of the Canadian public, not least because this market turmoil has reached deeper and wider than ever before. Now, people with “guaranteed” pensions find common cause with the people, without such pensions, watching their RRSPs evaporate.

This crisis has also exposed the flaws in the existing pension regulatory regime and the current plight of the Nortel and CHCH pensioners is a prime example. Pension reform that seeks to rebalance the interests of the employees/retirees and the employers/plan sponsors is long overdue but requires bold political leadership.

The federal government includes in its talking points that “on June 16, 2009, a motion proposing that the Government of Canada work with the provinces and territories to ensure the sustainability of the retirement incomes of Canadians received unanimous support in Parliament”.

More than 6,000 members responded and MPs across the country heard directly from CARP members in force over just two business days. The Finance Minister alone got over 500 emails from CARP members and he also voted for the Motion.

“Retirees ravaged by this economic downturn cannot wait for more studies. This tremendous and immediate response from our members shows how important this issue is for them. Government needs to act immediately to give them help now by increasing OAS, GIS and CPP and better protecting the interests of those with pension plans. It is also time to act for those without pensions”, added Eng

“CARP’s message to politicians has been: ‘seventy percent of older Canadians vote regularly and now that we’re also living longer, we will be voting regularly for a lot longer. So either you help protect our retirement or we’ll help you get to yours’.”, added Eng

There has been growing recognition that Canadians are not saving enough for their own retirement and that even those with workplace pensions are at risk in the current economic climate. CARP has called for a Universal Pension Plan modeled on the CPP for the estimated one in three Canadians who retire without any retirement savings.

Three provincial pension review panels [BC-Alberta, Nova Scotia and Ontario] identified the need to provide broader access to larger well-managed pension funds for Canadians who do not have access to workplace sponsored plans.

“All Canadians will benefit if the federal and provincial governments immediately start constructing a Universal Pension Plan – a universally accessible and affordable retirement savings vehicle that is robust enough to withstand demographic and economic challenges like those we are now witnessing. The first step is to convene a Pension Summit at which representatives of retirees have a material role”, added Eng.

CARP is a national, non-partisan, non-profit organization committed to advocating for a New Vision of Aging for Canada, social change that will bring financial security, equitable access to health care and freedom from discrimination. CARP seeks to ensure that the marketplace serves the needs and expectations of our generation and provides value-added benefits, products and services to our members. Through our network of chapters across Canada, CARP is dedicated to building a sense of community and shared values among our members in support of CARP’s mission.

The first thing the Canadian government should do is revamp the RRIF rules so that people do not have to extract a certain percentage of their retirement savings when they reach 65. I would scrap those rules altogether because they hurt many retirees who had to cash out at the market bottom. There also needs to be a lot more favorable tax incentives for retired people and workers looking to save more. But most important, we need a universal pension plan that covers all Canadians adequately so they can retire in dignity.

Finally, apart from Susan Eng, I also hope to see Canada’s current Chief Actuary, Jean-Claude Ménard and Canada’s former Chief Actuary, Bernard Dussault at this summit. There are other people I’d like to see there like Jean-Pierre Laporte and Diane Urquhart.

And despite his rude remarks, I think Mr. Lamoureux should be invited to this summit on pensions because he is an intelligent man who knows a lot about the pension industry. Just make sure he is not sitting anywhere near me.