Ambrose Evans-Pritchard has not given up on his deflationary views, which until recently were quite an outlier. But some recent data releases give support to his downbeat take. From the Telegraph:

This was not anticipated by the authorities anywhere, so we should be wary of their assurances now that we face nothing more than a brief dip in prices before rising energy costs bring inflation back into familiar and safe territory. No doubt prices will rebound as the “base effect” of oil prices kicks in. But by how much; for how long?…

White House aides are already mulling another blast of spending. It won’t fly. We have hit the political limits of such extravagance almost everywhere. The fiscal crutches of recovery are going to be knocked away, with outright tightening in a slew of states nearing the danger point of debt-compound spirals. This will occur in a world where excess capacity is already at post-War highs. It reeks of deflation.

Irving Fisher explained why the self-correcting mechanism of economies breaks down in his Debt Deflation Theory of Great Depressions in 1933: “Over indebtedness to start with, and deflation following soon after”. Most of the West has exactly that, but worse – debt is much higher.

Admittedly, this view is far from mainstream, but Thought Offerings pointed to some like-minded views and offered some data of its own:

In recent months I’ve noticed an increasing amount of commentary on the intensifying deflationary forces in the US and global economy, for example Albert Edwards:

: With import prices down some 19% yoy and even a record 7.3% yoy if one excludes petroleum, no wonder the price of domestic purchases has already fallen into deflation. If anything, domestic purchases inflation leads trends in both GDP and core CPI, so this is significant news.

Despite all of the talk and expenditure in Washington, the US banking industry is still sinking steadily and neither the Obama Administration nor the Federal Reserve seem to have any more bullets to fire at the deflation monster.

…..To visualize Consumer Price Inflation, I’ve only seen graphs of period-based changes in the price level (month-on-month or year-on-year), such as this chart from the July 2009 BLS CPI report: 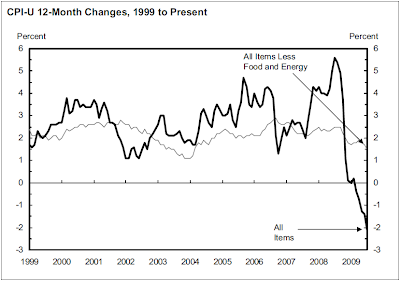 ….Since I couldn’t find any graphs of price levels (as opposed to change in price level), even though they must be out there, I made my own. Here is the first showing consumer price index trends in the US today compared to the Great Depression: 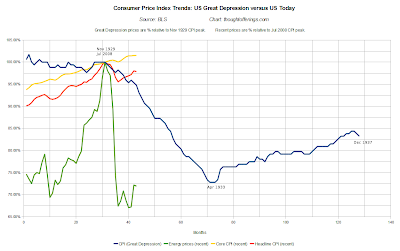 The place where all the lines meet on the chart (at 31 months) is normalized to 100% with all price levels relative to that peak. This point corresponds to July 2008 for the modern data and November 1929 for the Great Depression data. I have chosen to show several years preceding this point to give context to how quickly each measure had risen before peaking. Some observations:

CPI has been measured with different methodologies at different times, so this is not an apples-to-apples comparison.

After peaking in July 2008, headline CPI plunged at a faster rate than the onset of the Great Depression. No wonder (among other reasons) treasuries rallied so dramatically at the end of 2008 and then reversed as headline CPI started heading higher again!

Core CPI (excluding food and energy prices) has kept rising, but the pace of increase is slowing in 2009, even with energy prices relatively stabilized, despite coinciding with the largest monetary and fiscal stimulus in history! Is the battle with the “deflation monster” being slowly lost?

Looking at the BLS year-on-year CPI chart further above, the trough in the rate of change of core CPI of around 1% in early 2004 was almost four years after the dot-com stock market bubble popped, and over two years after the recession lasting officially from March 2001 to November 2001 ended! So (at the risk of being wrong by using only one data point) impacts to core CPI seem to lag recessions and changes in asset prices by years. It seems likely that this trend will replay today.

Headline CPI has turned (mildly) negative again in July — will a full downward trend resume? Might we face price deflation as ferocious as in the Great Depression? Personally I think it unlikely, but can’t rule it out entirely.

I added energy prices to the graph because they have been so volatile (whether due to global demand exceeding supplies, rampant financial speculation in energy as an asset class, or some combination of both). One way of looking at the effect on headline CPI is that the violent energy price spike simply forced headline CPI higher between mid 2007 and mid 2008 and that this is the primary cause of current deflation. While partially valid, I don’t think that’s the whole story.

He has a series of additional charts with commentary on each, all very illuminating. Continue reading here.