By Richard Alford, a former economist at the New York Fed. Since them, he has worked in the financial industry as a trading floor economist and strategist on both the sell side and the buy side.

It has been frequently charged that the Fed, under Alan Greenspan and Ben Bernanke, kept interest rates too low for too long, contributing to bubbles in the stock, credit and real estate markets. The Fed has repeatedly denied that this is the case. The arguments, while presented with conviction, remain unsatisfying.

For example in a recent blog posting, an official at one of the Reserve Banks joined the chorus in arguing that monetary policy was not to blame. He presented a chart of the actual Fed funds rate and an estimate path for the Fed funds rates based on measures of inflation, actual output relative to potential output, and the lagged Fed funds rate for the period 1988-2009. 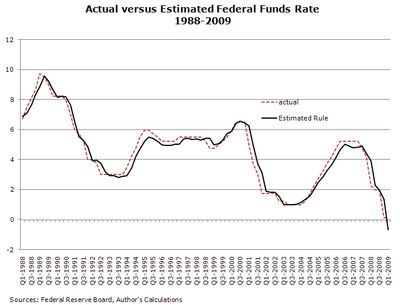 The estimated and actual rates never diverge by very much. (The author explicitly disavows calling his formulation a “Taylor Rule”. Perhaps it is because John Taylor has stated that the Taylor Rule correctly formulated indicates that the Fed funds rate was too low too long.)

The author then draws the following conclusion:

..whatever the underlying structure of policy decisions, after the fact the FOMC appears to have behaved in an extraordinarily consistent way over the period extending from the late 1980s. This observation, in turn, suggests to me that there was nothing all that unusual about monetary policy in 2003 once you account for the state of the economy. Which leads me to my main point…: If you are of the opinion that interest rate policy was good through the late 1980s and 1990s, then there seems to be a good case the FOMC was just sticking with “proven” success as it set interest rates through the dawning of the new millennium.

In its bare bones form, the argument is simply:

I suggest that the Fed official talk with the fellows from LTCM. They back-tested their models during periods that include the late 1980s and early to mid 1990s and they did well—for a while. I suggest that the policymaker talk to the financial engineers who structured mortgage backed securities and portfolios based on the historically accurate premise that house prices had not fallen on a national basis since the Great Depression (as opposed to just the late 1980s and 1990s). They also did well –for a while. The list goes on.

The author does acknowledge that macroeconomics and policy has not kept pace with changes in financial markets:

…prior to 2007 it was not at all clear that detailed descriptions of how funds moved from lenders to borrowers or how short-term interest rates are transmitted to longer-term interest rates and capital accumulation decisions were crucial to getting monetary policy right. Models without such detail tended to deliver policy decisions not far from the sort depicted above, and, as I noted, they seemed to be working quite well in terms of macroeconomic outcomes.

However, the underlying argument is unchanged. This policy regime was consistent with “getting monetary policy right” in the past. Hence it cannot be responsible for poor outcomes in the present. Given the nature and the pace of recent change in:

1. the US financial sector,
2. the US external position and trade competitiveness,
3. the role of imported disinflationary pressures, and
4. the savings behavior of households

choosing a policy regime because it “got” it right in the late 1980s and 1990s is/was like trying to drive a car by looking through a telescopic rear-view mirror.

Furthermore, by what measure did policy get it right during the period 1988-2002? From 1996 to 2001, we had an economy supported by an unsustainable bubble in stock prices, growing external imbalances and a decline in the household savings rate while measured inflation was held down by imported disinflation. Toss out the Tech bubble years and the author’s base period is down to 1988-1995, which includes one recession. For much of the time in the expanded time horizon (1988-2009), the US economy was either in recession (1990, 2001, 2007), experiencing asset bubbles (1996-2000 and 2002-2007) which eventually burst causing economic dislocation, or enjoying a jobless recovery.

Throughout the discussion of the merits of Fed policy, I get the sense that the Fed wants to be Marked-graded-to-Model (of its own choosing) as opposed to the actual economic outcome. The Fed does appear to have done a credible job when the chosen metric is how closely the actual Fed rates tracks an estimated Fed funds rate (based on one or another variant of the Taylor Rule). However, when the metric is one that includes concerns such as sustainability of growth, external balance, and financial stability, as well as the output gap and inflation, it does not.

The Fed was quick to take credit for the “Great Moderation” and the longest economic expansion in US history, but now the Fed portrays itself as an innocent victim of circumstance. It is almost as if the Fed sees itself as a comic book super hero, endowed with powers that can only be used for good.