Hhm, it’s always intriguing when accounts do not line up. This tidbit from a hedge fund reader:

From the eagerly-read Andrew Ross Sorkin Vanity Fair excerpt of his book “Too Big to Fail” on the meltdown:

Meanwhile, Jon Pruzan, the Morgan Stanley banker who had been assigned to review Wachovia’s $122 billion mortgage portfolio—to crack the tape—finally had some answers. A team of Morgan bankers in New York, London, and Hong Kong had worked overnight to sift through as many mortgages as they humanly could.

“Now I know why they didn’t want to give us the tape!” Pruzan announced dourly at a meeting before they headed over to Sullivan & Cromwell to begin due diligence on Wachovia. “It shows they’re expecting a 19 percent cumulative loss.”

“You’ve got to be fucking kidding me,” Robert Scully exclaimed. “We obviously can’t do this deal.”

To make it work, Morgan Stanley would have to raise some $20 to $24 billion of equity to capitalize the combined firms, a virtual impossibility under the current market conditions. Scully described Wachovia’s mortgage book as “a $40 to $50 billion problem. It’s huge. The junior Wachovia team is not disputing our analysis.”

Kelleher, who had been keeping a careful watch over the firm’s dwindling cash pile, had just taken a look at Wachovia’s numbers for himself and observed, “That’s a shit sandwich even I can’t get my big mouth around.”

From p. 18 (click to enlarge) of a September 16, 2009 presentation by John Stumpf to the Barclays Capital Global Financial Services Conference: 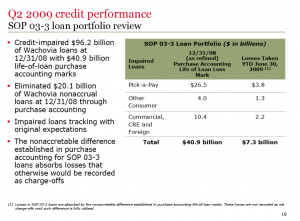