Yesterday, I pointed out that a study by one of the leading economic modeling companies shows that military spending increases unemployment and decreases economic growth.

I have located (giant hat tip to Gordon)  a paper by economist Robert Pollin published in 2007 by The Political Economy Research Institute at the University of Massachusetts, Amherst – entitled “The U.S. Employment Effects of Military and Domestic Spending Priorities” – which concludes:

We present in Table 1 our estimate of the relative effects of spending $1 billion on alternative uses, including military spending, health care, education, mass transit, and construction for home weatherization and infrastructure repair. “Military Keynesianism” – the idea that war is the best economic stimulus – is false.

Update: Pollin published an updated version of his paper on October 20, 2009. The abstract summarizes their updated findings:

The authors compare the effects of a $1 billion military investment military and the same investment in clean energy, health care, education, or individual tax cuts. They show that non-military investments create a much larger number of jobs across all pay ranges. With a large share of the federal budget at stake, Pollin and Garrett-Peltier make a strong case that non-military spending priorities can create significantly greater opportunities for decent employment throughout the U.S. economy than spending the same amount of funds with the military.

And here are a chart and table from the updated study: 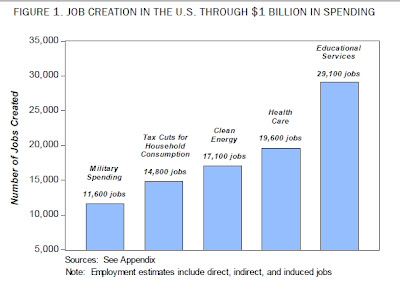 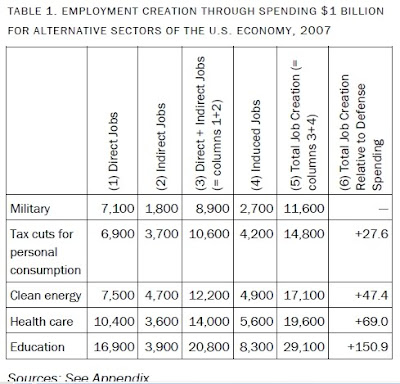