Up all night getting last corrections on the book in. After I crash, will do proper Links later (readers sent me some particularly interesting material, from the looks of my inbox). So check in later!

Hope you are enjoying your holidays! 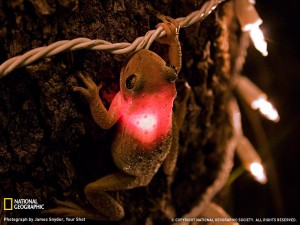 This is a Cuban tree frog on a tree in my backyard in southern Florida. How and why he ate this light is a mystery. It should be noted that at the time I was taking this photo, I thought this frog was dead, having cooked himself from the inside. I’m happy to say I was wrong. After a few shots he adjusted his position. So after I was finished shooting him, I pulled the light out of his mouth and he was fine. Actually, I might be crazy but I don’t think he was very happy when I took his light away.