One of the impediments to getting to the bottom of the financial crisis is some of the most destructive behavior involved complex instruments like collateralized debt obligations and credit default swaps. It isn’t simply that these “innovations” had terms and features that differ from familiar investments like stocks and bonds, but the way those instruments were used, both the trading/investment strategies and transaction mechanics, also differs from those of more traditional instruments.

This matters because it is very easy to go off half cocked, and that in the end serves the financial services industry, not the cause of reform.

I assume most if not all readers are upset about the sorts of things that happened and are happening in finance. But we need to remember what we are up against. The lobbyists paid by the financial services industry to kill reform are professionals. And so far, they have done a very effective job.

So even though the enthusiasm for identifying suspicious-looking activity is understandable, if the pro-reform camp is not careful and pursues flights of fancy that are unsupported by hard evidence, or simply overstates what it has proven, then it plays into the hands of banking industry lobbyists. It makes it easy for them to paint critics as not credible, thereby hurting efforts to rein in the industry.

Some of the discussion around the Fed/AIG chicanery falls into this camp. Now it seems almost without question that if more rocks were turned over at AIG, more creepy crawlies would emerge. Why had the Fed gone to such lengths to keep transaction-level detail at Maiden Lane III secret? Why were those CDOs bought at all? Why was Goldman so heavily involved in these transactions (both directly, via CDS it had with AIG, and indirectly, via CDOs it had created but were held by other banks?). Many of these deals were created when Paulson was CEO of Goldman; why hasn’t this aspect of his many conflicts in dealing with his former firm been probed more deeply?

And where was the Fed? CDS were a known systemic risk as of the Bear rescue; any reasonable look at that market would have led straight to AIG. The “we weren’t their regulator” excuse is spurious; they regulated AIG’s counterparties and could easily have connected the dots, particularly since the monolines were on the ropes as of early 2008.

That’s a mere starter list, but it illustrates that there are many fruitful lines of inquiry on the AIG/Fed front. But then we have some lines of attack that are wide of the mark.

I hate personalizing this discussion, but one example comes in a series of posts by David Fiderer. He’s tried digging into AIG transaction details, which is a worthwhile undertaking. However, his eagerness to come up with attention-grabbers had led him to make charges that are contradicted by other evidence or CDO market practice. While he has raised some questions, unfortunately, they do not shed any new light on these bigger, more pressing issues and may in fact confuse them.

Let’s take some examples from a recent post, starting at the top:

Did Societe Generale ever view its $1.2 billion investment in Adirondack 2005-2 as a buy-and-hold proposition? Or was the bank’s original intention to offload the risk on to AIG? The answer is central to our understanding of the portfolio of collateralized debt obligations, or CDOs, that wiped out the insurance behemoth. The circumstances of SG’s, and other banks’, holdings, suggest that CDO market was a Potemkin’s Village, a facade constructed to give the illusion of economic substance to a series of sham transactions.

Huh? These transactions in the end proved to be colossally stupid, both from the AIG and the SocGen perspective, but you need a lot more to prove nefarious intent.

First, buyers of AAA tranches of CDOs often got credit protection. That alone should in theory raise eyebrows, but it was hardly unusual, let alone devoius, particularly when the packager/guarantor that retained the position was a European bank. It was very common for European banks to hang on to the AAA tranches of CDOs, both those made primarily of residential real estate (called ABS, for asset backed securities, CDOs) and commercial real estate (CRE CDOs). Why? They had a great deal of latitude in how much (meaning how little) equity they were required to hold against AAA paper under Basel II rules, and when they hedged AAA paper with an insurance policy from an AAA counterparty like AIG, they held no equity against the position (and some banks even gave favorable treatment to guarantees from lower-rated insurers like ACA).

This regulatory capital treatment led to a good deal of behavior that was dysfunctional and destructive, but to suggest it was unusual is simply incorrect.

In keeping, Fiderer has focused on the largest CDOs that ultimately were bought by the Fed via Maiden Lane III. These were two transactions, MAX 2007 1 A-1 and MAX 2008 1 A-1, each disclosed in the Maiden Lane III financial statements, both commercial real estate CDOs (thus not part of the infamous “multi sector CDO portfolio”, click to view full image): 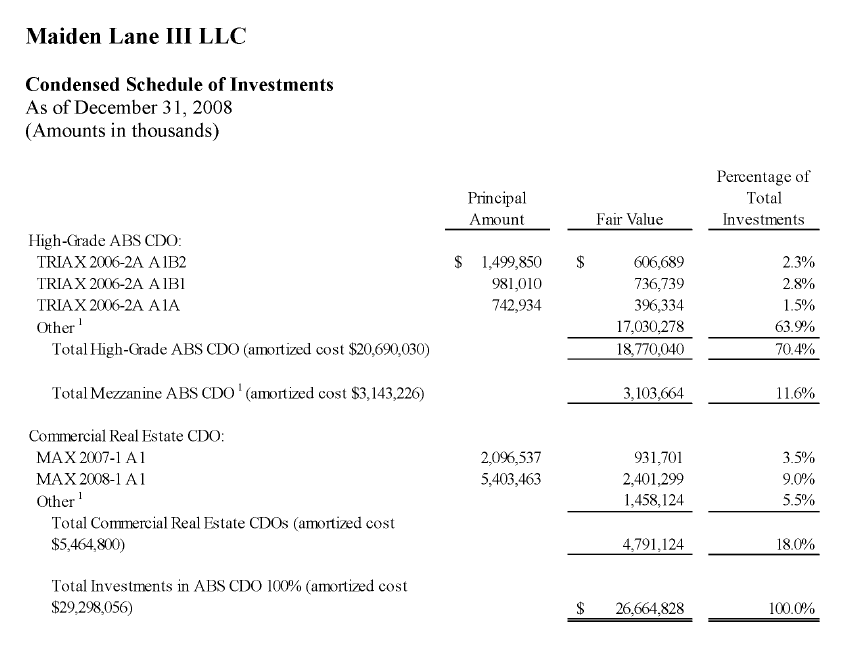 The biggest and most obvious example, disclosed last May, was Max 1. Deutsche Bank underwrote the $5.8 billion deal, and held on to $5.4 billion, a 94% share. This should have been a big story at the time. Max I was one of the largest CDOs ever underwritten, and the fact that Deutsche would have attempted to bring such a deal to market in June 2008, when everyone was feeling skittish about real estate securitizations, would have been notable in and of itself. Yet Deutsche was unable to sell off more than a tiny part of the deal. The fact that the underwriting failed should have been even bigger news. However no one paid much attention, since no public disclosure was required. Deutsche quietly offloaded its risk exposure to AIG Financial products.

Yves here. Fiderer is similarly wrong about the role this deal served for AIG. This deal appears never to have been intended to be “brought to market” and in fact was designed with AIG’s cooperation, possibly even at AIG’s instigation. These comments come in a BlackRock memo to AIG in early November on the AIG exposures:

“Deutsche is financing AIG’s position in 2a7 deals, including Project Max (which comprises the vast majority of Deutsche’s portfolio with AIG)

” AIG believes there are no early termination penalties for ending this funding facility.

“If it were not terminated, Deutsche Bank’s financing would roll off in 3 to 6 years in a staggered fashion (and AIG would fund the reference CDOs piecemeal over that period)”

“Deutsche has not been approached to unwind the facility because of the liquidit beneift that Deutsche has provided to AIG”.

This was not a typical CDO; even with the collateral calls against the MAX CDOs, AIG was still getting net liquidity from these deals. Indeed, AIG had entered into these transactions as a way to raise cash. In fact, AIG was not interested in unwinding these deals, and unlike its other CDOs, AIG had not had BlackRock, its advisor, approach its counterparties about a settlement.

While the details are opaque, it seems that these deals were designed explicitly to provide funding to AIG, and was still perceived by AIG to be on balance beneficial even the in the fact of collateral calls. Given the length of the financing facility, one can presume Deutsche never intended to sell this CDO; it’s apparently collateral for secured funding. These deals look to have had their own unique set of circumstances and do not fit in with the rest of the story. Fiderer looks to be off on wild goose chase in characterizing the MAX deals as hung transactions.

By the standards of any normal bond underwriting, Goldman’s inability to sell down either Altius 2 or West Coast Funding would have been viewed as a conspicuous failure. And such news would have inhibited other banks and investors, including monoline insurers, from taking on incremental CDO exposures.

Had the subprime CDO market shut down in 2006, would there have been any ripple effect on other financial markets or the real economy? It’s doubtful, since the CDOs were not financing anything new. They merely repackaged versions of mortgage bonds that had already been sold into the marketplace.

Yves here. This is inaccurate in several respects. First, finding an insurer was one of the key requirements for launching a CDO, just as finding someone to take the equity tranche. In terms of timing, the credit default swap would close on the same day as the CDO or within a few days, but the CDS was integral to getting the CDO done. And remember, the CDS was only on the top tranche, not the entire deal.

So Fiderer claims that the CDO market would have shut down had the insurers realized that the banks were retaining a lot of the insured tranches. Really? The banks were selling, not retaining the lower-rated tranches. Those investors would take losses before the AAA CDO holder and the guarantors did. Had the insurers found out the sponsors were keeping the AAA tranaches, the bankers would no doubt have protested, “Yes, we are keeping this deal because we like it.” And given how keen everyone was to keep dancing as long as the music was playing, it’s doubtful that any monoline would have questioned this sort of answer.

Second, Fiderer has this bit wrong: “They merely repackaged versions of mortgage bonds that had already been sold into the marketplace.” CDOs were essential to the subprime market. They did not “repackage bonds that had been sold.” They were the means for selling the tranches of subprime RMBS that would otherwise go unsold.

While the equity tranche of subprime bonds had a loyal following among some hedge funds (the equity tranche paid down quickly when a deal worked out according to plan, and also received the overcollateralization and excess spread), the BBB tranche was not very well loved, and the A and AA tranches were not too popular either. So CDOs were the way to sell these unwanted bits, to recombine them and make them look more appetizing through structured credit alchemy. Thus the continued growth of the subprime market depended on the ability to place CDOs. This may in part explain why investment banks like Goldman and Merrill were willing to retain the insured AAA tranches: it would keep the CDO machinery going, which was necessary to the subprime business.

There are a lot of unanswered questions, both around the Fed bailout of AIG, and the CDO market in general. And the relationships among the counterparties on the deals are worth examining; they look unusual, and some patterns suggest that banks may have been working together on particular programs. But even though the additional information released by Rep. Darrell Issa, who has led the effort to force more disclosure of the AIG bailout has been helpful, it still falls short of what is needed to understand the motives and logic of the main actors, not just the banks themselves, but the individuals involved in the resuce: Paulson, Geithner, Bernanke, and their overly-close advisor, Blankfein.