In a new report, the Bank for International Settlements (BIS) – often called the “central banks’ central bank” – points out that bond investors are not as smart as they think, that Western debt is much higher than officially reported (since contingent liabilities and pension debts are excluded from official numbers), and that the recovery of the world economy may be crushed by fiscal problems.

According to the OECD, total industrialised country public sector debt is now expected to exceed 100% of GDP in 2011 – something that has never happened before in peacetime. As bad as these fiscal problems may appear, relying solely on these official figures is almost certainly very misleading. Rapidly ageing populations present a number of countries with the prospect of enormous future costs that are not wholly recognised in current budget projections. The size of these future obligations is anybody’s guess. As far as we know, there is no definite and comprehensive account of the unfunded, contingent liabilities that governments currently have accumulated.

For background on the effect of aging populations on the economy, see this.

The report includes the following chart on age-related expenditures by country (click for clearer image): 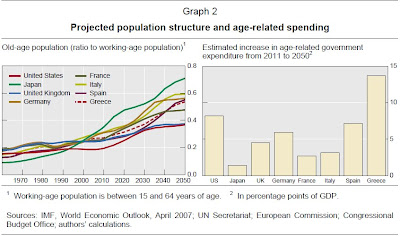 Official debt figures in the West are “very misleading” since they fail to take in account the contingent liabilities and pension debts that have mushroomed over recent years.

More worryingly, the current expansionary fiscal policy has coincided with rising, and largely unfunded, age-related spending (pension and health care costs). Driven by the countries’ demographic profiles, the ratio of old-age population to working-age population is projected to rise sharply. Interestingly, this rise is concentrated in countries such as Japan, Spain, Italy and Greece, which are already laden with relatively high debts (Graph 2, left-hand panel). Added to the effects of population ageing is the problem posed by rising per capita health care costs.

In other words, BIS is slamming the Western nations for failing to budget for their rapidly aging populations and to set aside adequate funds during the boom. As Evans-Pritchard puts it:

BIS lamented the lack of any systematic data on the scale of unfunded IOUs that care-free politicians have handed out like confetti.

(And, of course, America has been spending money on both guns and butter).

Indeed, here are some recent stories about America’s pension crisis:

The BIS report further points out that bond traders overestimate their timing and forecasting skills:

So far, at least, investors have continued to view government bonds as relatively safe. But bond traders are notoriously short-sighted, assuming they can get out before the storm hits: their time horizons are days or weeks, not years or decades. We take a longer and less benign view of current developments, arguing that the aftermath of the financial crisis is poised to bring a simmering fiscal problem in industrial economies to boiling point. In the face of rapidly ageing populations, for many countries the path of pre-crisis future revenues was insufficient to finance promised expenditure.

The risk that persistently high levels of public debt will drive down capital accumulation, productivity growth and long-term potential growth. Although we do not provide direct evidence of this, a recent study suggests that there may be non-linear effects of public debt on growth, with adverse output effects tending to rise as the debt/GDP ratio approaches the 100% limit (Reinhart and Rogoff (2009b)).

Actually, as Reinhart and Rogoff showed last December, 90 percent is the threshold:

The relationship between government debt and real GDP growth is weak for debt/GDP ratios below a threshold of 90 percent of GDP. Above 90 percent, median growth rates fall by one percent, and average growth falls considerably more. We find that the threshold for public debt is similar in advanced and emerging economies…

And, as Forbes noted about America:

Add the unfunded portion of entitlement programs and we’re at 840% of GDP.

And see this and this.

BIS concludes with this bearish scenario:

If countries do not retrench quickly, they will create a market fear of “monetization” that becomes self-fulfilling. “Monetary policy may ultimately become impotent to control inflation, regardless of the fighting credentials of the central bank” it said.

Some states may be tempted to carry out a creeping default by stoking inflation. “The payoff to do this rises the bigger the debt, the longer its average maturity, the bigger the fraction held by foreigners.” The BIS said the danger that any government would consciously take this path is “not insignificant” in the longer run.

Of course, a brutal fiscal purge in every major country at once itself poses a danger. The result would be to crush recovery and tip the world economy back into crisis, making deficits worse again.

Ultimately, though, the primary cause of this acute stage of the global debt crisis is very simple.

As BIS warned in 2008, nations worldwide were bailing out their private banks by transferring toxic risk from the banks onto the sovereigns’ own books. The giant banks are, of course, still drowning in debt and – using real world accounting – insolvent, due to all of their gambling schemes gone wrong and toxic assets. The “too big to fails” all over the world have acted like a drowning man who grabs onto someone else and – thrashing around wildly – ends up drowning both.

I don’t yet have an opinion on whether it’s a good idea or not, but debt repudiation appears to be a growing response to the debt crisis.