Iceland has approximately the 101st biggest economy in the world.

Greece is somewhat bigger, with the 27th biggest economy.

When Iceland, Dubai and Greece tanked, that was horrible … but not catastrophic.

Portugal – the 37th biggest economy – may be next. It would be horrible if Portugal tanks.

But Spain is also in real trouble. As the 9th biggest economy, a default by Spain could be major.

But none of these are in the same ballpark as Japan – the world’s 2nd biggest economy (by nominal gdp). Only the U.S. is bigger.

So it is newsworthy that S & P cut Japan’s sovereign credit rating in January.

And that, as Bloomberg wrote April 2nd:

Japanese National Strategy Minister Yoshito Sengoku said the country should have a greater sense of urgency about the nation’s fiscal situation, comparing it to the plight of Greece. “So far some have been crying wolf, but Greece’s situation isn’t entirely unrelated to Japan’s,” Sengoku said at a news conference in Tokyo today. “At the end of the day, Japan’s situation right now is not that good. There hasn’t been a sense of crisis about this, including from ourselves.”

Sengoku is not the only policy maker to compare Japan with Greece, whose fiscal woes weakened the euro and forced the government to adopt austerity measures as its borrowing costs surged. Bank of Japan board member Seiji Nakamura said in February that Greece’s example shouldn’t be regarded as “a burning house on the other side of the river.”

Greece’s debt problems may currently be in the spotlight but Japan is walking its own financial tightrope, analysts say, with a public debt mountain bigger than that of any other industrialised nation.

Public debt is expected to hit 200 percent of GDP in the next year as the government tries to spend its way out of the economic doldrums despite plummeting tax revenues and soaring welfare costs for its ageing population.

Based on fiscal 2010’s nominal GDP of 475 trillion yen, Japan’s debt is estimated to reach around 950 trillion yen — or roughly 7.5 million yen per person.

Without issuing more government bonds, Japan “would go bankrupt by 2011”, he added.

The system of Japanese government bonds being bought by institutions such as the huge Japan Post Bank has been key in enabling Japan to remain buoyant since its stock market crash of 1990.”Japan’s risk of default is low because it has a huge current account surplus, with the backing of private sector savings,” to continue purchasing bonds, said Katsutoshi Inadome, bond strategist at Mitsubishi UFJ Securities.

But while Japan’s risk of a Greek-style debt crisis is seen as much less likely, the event of risk becoming reality would be devastating, say analysts who question how long the government can continue its dependence on issuing public debt.

“There is no problem as long as there are flows of money in the bond market,” said Kumano.

“It’s hard to predict when the bond market might collapse, but it would happen when the market judges that Japan’s ability to finance its debt is not sustainable anymore.”

In addition, Japan’s population is declining rapidly, due to a combination of delay in age of childbirth, declining fertility and a society unfavorable to immigration. As Business Week wrote last August:

Japan’s Internal Affairs Ministry published the latest numbers on the country’s declining population on Aug. 11. The data doesn’t make for pleasant reading. In the year through the end of March 2009, the number of births in Japan fell for the first time since 2006 to 1.08 million, while there were 1.13 million deaths. Put together, that adds up to a record decline in the population of 45,914. That bests (if that’s the right word) the previous biggest decline of 29,119 in 2007. Just as worrying, the number of Japanese 65 or older increased to a record 28.21 million out of total population of 127 million. Meanwhile, the current recession—Japan’s GDP may shrink 6% this year—will likely make things worse as couples decide to delay or have fewer children.

The population dynamics estimate of the Health, Labor and Welfare Ministry indicates that Japan’s population decline is accelerating. The report, based on birth and death registers submitted from January 2009 to October 2009, estimates the number of births in Japan in that year at 1,069,000, or 22,000 less than in 2008, and the number of deaths in 2009 at 1,144,000, or 2,000 more than in 2008. The death figure is the highest since 1947 and represents the ninth straight yearly increase.

The National Institute of Population and Social Security Research estimates that Japan’s population will dip below 100 million in 2046, below 90 million in 2055 and down to 44.59 million in 2105. If this trend continues, the labor force and consumer markets will shrink, having a strong impact on the economy. 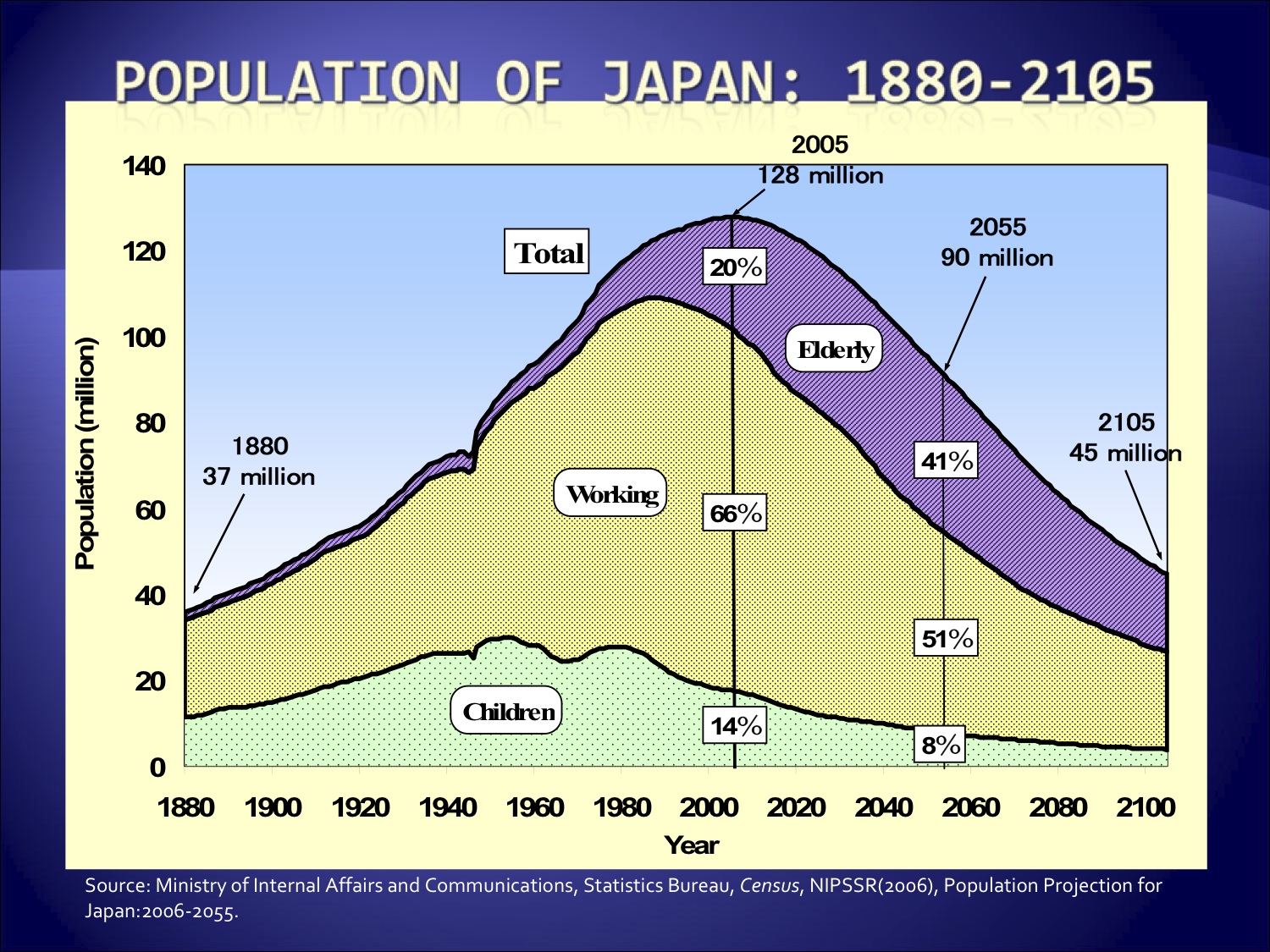 The following chart shows that Japan has the worst demographics of all, with a staggering percentage of elderly who need to be taken care of by the young:

And see this chart from the Statistical Handbook of Japan:

On the other hand, as AFP notes, Japan has some good things going for it, including a large current account surplus, and the fact that Japanese are largely financing their debt themselves:

The system of Japanese government bonds being bought by institutions such as the huge Japan Post Bank has been key in enabling Japan to remain buoyant since its stock market crash of 1990.

“Japan’s risk of default is low because it has a huge current account surplus, with the backing of private sector savings,” to continue purchasing bonds, said Katsutoshi Inadome, bond strategist at Mitsubishi UFJ Securities

The likes of single-currency Greece and non-eurozone countries are also different in that the latter group have flexible currency exchange rates which are more closely calibrated to their fiscal conditions, [Nomura Securities economist Takehide Kiuchi] said.

The Bank of Japan is also taking radical measures to keep interest rates low, but I don’t think that’s a very helpful approach for the long-term.

Of course, no country can be analyzed in a vacuum. It is – to some extent – a beauty contest, and bondtraders could change horses when they decide that the horse they’ve been backing is a nag.

Japan sure looks like it is trouble. But some comparisons to the US are more troubling.

From the CIA fact book:

From this you get the Japanese External Debt/Reserves as 2:1. For every dollar of debt they owe outside the country they have 50 cents in a piggy bank in real reserves.

The US External Debt/Reserves is 180:1. Our reserve coverage ratio is 1/2 cent for every dollar of external debt.

GW makes the case that Japan is broke because they owe 200% debt to GDP. He is right. They are broke. But the real question of solvency come down to “Who do you that debt to?”

So by this calculation Japan has a much more managable debt load than the US. They owe it largely to themselves. We owe it to non US persons.

Please don’t tell me that the US has the ability to print reserves. That argument is not going to fly in 2010. We have a much bigger problem that does Japan.

And if Exeter is right, then the holders of all nations‘ bonds might get nervous and flee into cash or gold. This would drive many debt-heavy countries into default.